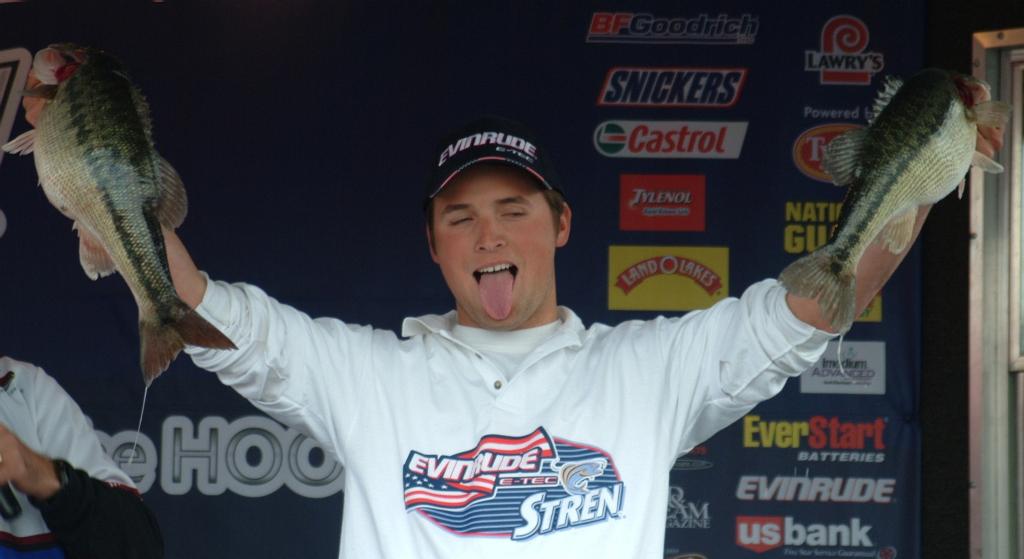 Lucas, who also led day one, caught a limit weighing 18 pounds, 11 ounces Saturday and established a two-day winning weight of 31 pounds even.

“First of all, I want to say that I fished with the greatest guy in the world, Dave Nollar,” said Lucas, who fished behind Nollar both Friday and Saturday. “I’ve never had so much fun hanging out with a 60-year-old guy before.”

Lucas worked Nollar’s big-fish area up the Sacramento River arm with 6-inch Roboworms rigged on dartheads. His 18-pound, 11-ounce stringer – the third-heaviest of the week, pro or co-angler – was anchored by a 6-pound spotted bass.

While just 19, this was the second boat that Lucas has won tournament fishing. He fishes team tournaments with another of this week’s anglers to make the cut, pro John Billheimer Jr. – who, incidentally, won at Lake Havasu in February – and they won a boat together in regional competition last year.

“Yeah, I guess we’re just trying to make a name for ourselves,” Lucas said about his and Billheimer’s successes this season.

Second place for the co-anglers and $4,000 went to day-three leader Dan Powers of Weaverville, Calif., for a final-round weight of 18 pounds, 3 ounces.

“I got a tour of swimbait fishing today, but I just couldn’t find a niche for myself,” he said.

Charles Dean of Brentwood, Calif., finished third and earned $3,460 on the co-angler side for a final weight of 18 pounds even.

By virtue of a tiebreaker, J.R. Wright of Truckee, Calif., finished fourth and collected $2,460, also for 18 pounds even.

Rounding out the top 10 co-angler finishers at Lake Havasu:

Iloski leads the Western Division co-angler standings with 572 points. Rickicke is second with 560, and Beardsley is third with 541.

The next Stren Series event is a Southeast Division contest at Santee Cooper lakes near Manning, S.C., April 19-22.

The next Western Division tournament is the fourth and final event of the season. It will be held at the California Delta near Bethel Island, Calif., May 3-6.