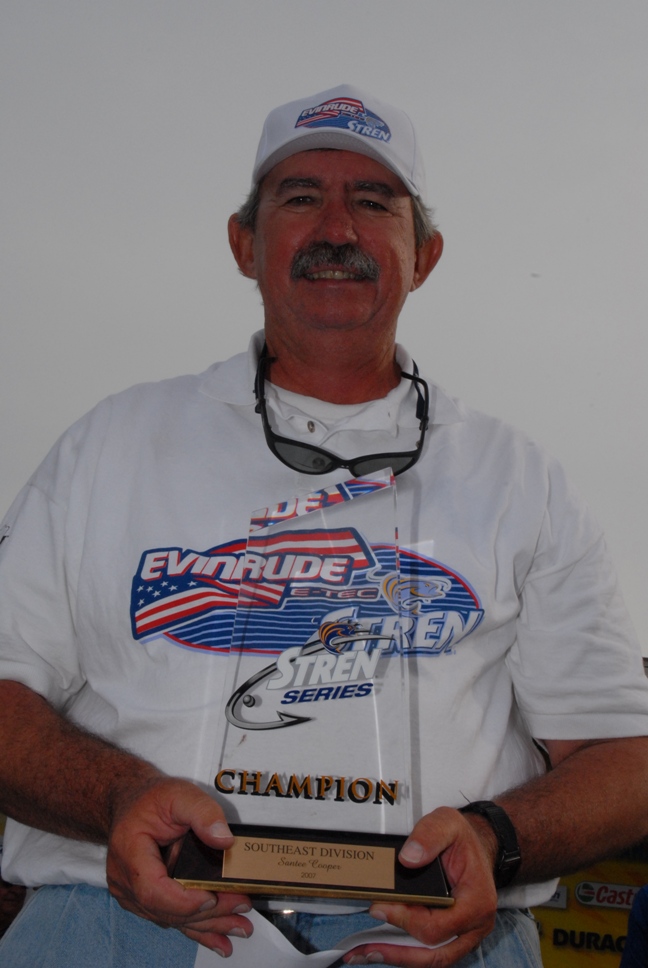 MANNING, S.C. – In 2003, Brad Rodrigue of Pierre Part, La., won the very first Wal-Mart FLW Tour event he fished as a co-angler at the Atchafalaya Basin.

Since then, Rodrigue’s success has been limited in FLW Outdoors events.

Today, Rodrigue got back on top of the co-angler leaderboard with a win at the Stren Series event on Santee Cooper lakes.

“This breaks a long drought,” Rodrigue said. “This win is more special than the first one, because the first win just happened before I knew it. But since I’ve been out here casting and reeling for another win for the last three years, I feel like I earned this one.”

Rodrigue had a particularly special day Saturday while fishing with runner-up pro Mark Hutson. Hutson was sight-fishing and allowed Rodrigue to catch buck bass guarding nests as he looked for bigger females.

“It was a phenomenal day,” Rodrigue said. “Mark helped me out a bunch. He gave me the right bait – a Zoom Ultra-Vibe craw – and stopped to let me catch bass on beds. It was fantastic.”

Rodrigue collected $5,000 for his win plus a brand-new Ranger boat for being a Ranger owner.

Arch Cornett of Huntsville, Ala., finished second with a four-day total of 38 pounds, 15 ounces.

“I learned early on in the tournament that long casts were the key to getting bit,” Cornett said. “These fish were so spooky that fish an average cast away from the boat were long gone by the time the bait hit the water.”

“I’d sling that Flash out there as far as I could possibly get it, and then I’d just let it settle and sit still for a long time before moving it.”

Lloyd Meyers Jr. of Jacksonville, Fla., finished third with a four-day total of 29 pounds, 8 ounces. Meyers used a weightless Senko in a watermelon-red color to catch his fish.

Rounding out the top 10 co-anglers in the Stren Series event on Santee Cooper:

Aaron Fahnestock of Enterprise, Ala., won the Co-angler Division points race in the Stren Series Southeast Division for 2007 with 741 points.

Fahnestock finished fourth at Lake Okeechobee, 42nd at Lake Eufaula, ninth at Lake Seminole and ended the season with an eighth-place finish here at Santee Cooper.

“It’s been a great season on the Stren Series,” Fahnestock said. “I think my success has had a lot to do with fishing so many tournaments this year. I’m fishing the FLW Tour, FLW Series and the Strens this year, and spending so much time on the water in tournaments helps speed up that adjustment process each day.

“Now I’m going to the Stren Series Championship and see if I can win that Stren Series Angler of the Year Ranger boat.”