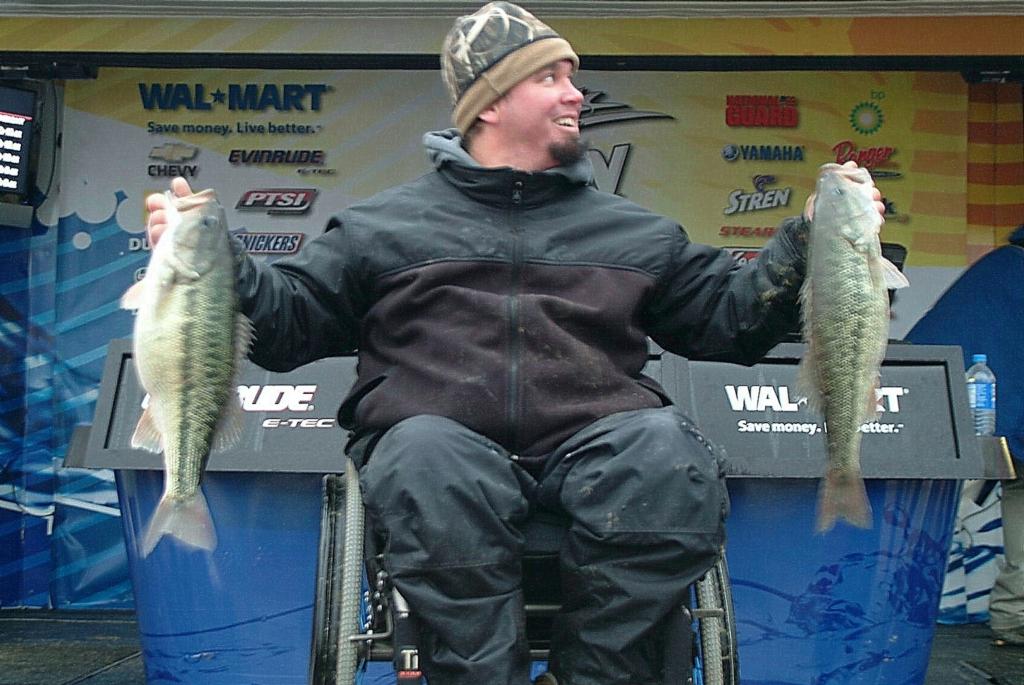 REDDING, Calif. – If there was any doubt that local pro Chris Laskowski could keep up the torrid pace he’d set in Wednesday’s competition, it was summarily dispelled after today’s weigh-in. Buoyed by a 13-pound stringer in Thursday’s competition – the third largest limit of the day – Laskowski was not only able to maintain his overall lead in the Pro Division but significantly add to it as well.

“I’m excited mostly because nobody was able to gain on me today. I actually have a bigger lead than yesterday,” said Laskowski, who has a two-day combined weight of 31 pounds, a full 6-pounds, 12-ounces greater than his next closest competitor. “If I can just catch 10 pounds the next two days, I don’t think anyone is going to be able to catch me.”

With his staggering 18-pound catch in yesterday’s competition, Laskowski came into today holding a 5-pound, 10-ounce lead. However, there were plenty of veteran pros lurking in the background, waiting to pounce should Laskowski stumble. But as the day unfolded, only one of the top-10 pros from Wednesday’s competition – Robert Lee of Angels Camp, Calif. – managed to turn in a bigger stringer than they had recorded yesterday.

The result – Laskowski has now fashioned himself as the clear favorite to walk away with the title. However, it’s hardly been a cakewalk. 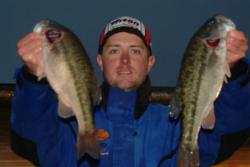 “It was definitely a lot tougher bite today,” said Laskowski. “The front that came through really turned the fish off. I wound up catching more fish today but they were definitely smaller fish. I’m actually scared heading into tomorrow because I’m not really sure where I’m going fishing yet.”

Like the first day of competition, Laskowski did a lot of “running around,” targeting approximately 25 areas within a 40-mile radius.

“I didn’t catch one fish at any of the spots I caught fish at yesterday,” said Laskowski. “I’m also fishing several different patterns and about three different baits. My goal tomorrow is to just keep doing what I’ve been doing. And hopefully, I’ll get some good bites.” 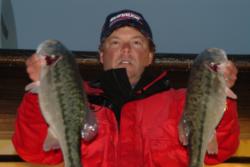 Meanwhile, Bill Townsend of Redding, Calif., took over sole possession of second place on the strength of a two-day catch weighing 24 pounds, 4 ounces. Townsend had been tied with Mike Folkestad of Yorba Linda, Calif. However, Folkestad dropped to 52nd place after turning in an uncharacteristically mediocre catch of 2 pounds, 12 ounces in today’s competition.

“Right now I feel pretty lucky,” said Townsend. “I’m not getting a lot of bites, I only caught seven keepers and I didn’t have a limit until 2 p.m. today. But I definitely feel good where I’m at right now. A lot of the pressure is off.”

Townsend said that he’s fishing jigs in 5 to 20 feet of water, focusing in on tree bottoms and “subtle sloping points.” 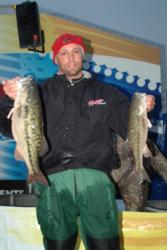 Rob Dearmond of Redding, Calif., finished in fourth place for the second consecutive day with a total two-day catch of 20 pounds, 11 ounces.

Rounding out the top-five pros was Steve Klein of Oroville, Calif. Like Dearmond, Klein also maintained the exact same place in the standings as yesterday, finishing the day in fifth place with a total catch of 19 pounds, 1 ounce. 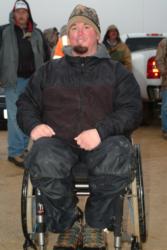 Although plenty of people were talking about Laskowski’s second consecutive stellar day on the water, the best story of the day clearly centered around the exploits of Matt Beller of Anderson, Calif.

After finishing day one in 103rd place, Beller turned in a whopping 17-pound, 8-ounce catch to grab the overall lead. While that feat was amazing in and of itself, the fact that Beller can only move around with the aid of a wheelchair made his comeback simply astonishing.

“I’ve just had a dream day,” said Beller, who recorded a two-day catch of 22 pounds, 2 ounces. “This is absolutely the best day of fishing I`ve ever had. It’s just incredible. I’ve been dreaming of a day like this my whole life. And if I somehow manage to win this, I’d take pride in knowing I was able to accomplish this for disabled veterans everywhere.”

Beller, a veteran of the U.S. Marine Corps from 1994 to 1997, suffered a debilitating injury while attending the Mountain Warfare Training Center near Bridgeport, Calif. But despite his injury, it hasn’t stopped him from competing at the highest levels of tournament bass fishing.

Or being modest beyond his years.

“I have to give a lot of the credit to my partner. He put me on fish,” said Beller, who also captured the day’s Big Bass award with a 6-poiund, 5-ounce catch.

As for the logistics of fishing with such an injury, Beller simply put it this way, “When I get in the boat, I just ride in the shotgun seat.”

After his friends carried Beller and his wheelchair offstage to non-stop applause from the crowd, the young man explained his remarkable day of fishing.

“I was fishing 6-inch worms in about 15 to 20 feet of water,” he said. “Then we just pulled up on a spot and I caught a 6-pounder and a 5-pounder on back-to-back casts. Like I said, it’s just been an incredible day for me.”

Amazingly enough, after his injury, Beller said he had a revelation.

“Ever since that day, I’ve dreamt of becoming a tournament bass fisherman,” he said.

If today was any indication, Beller doesn’t need to dream any longer – he’s already accomplished his goal … and then some.

Rounding out the top-five co-angler leaders at the Stren Series Western Division event: