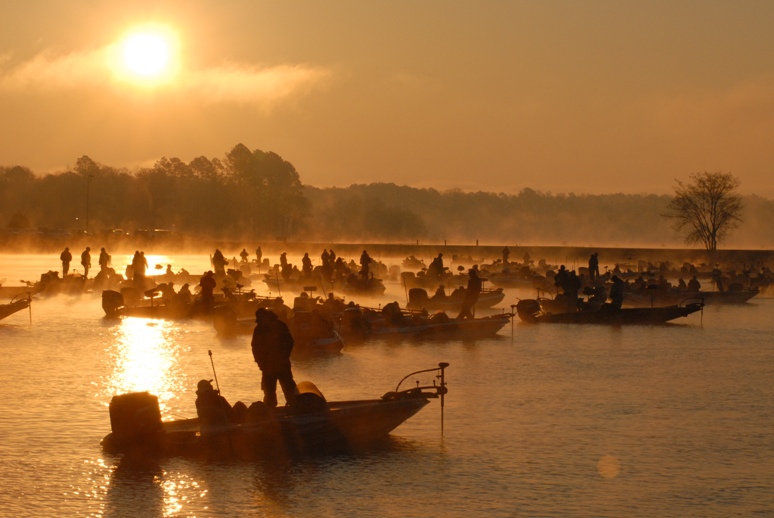 EUFAULA, Ala. – When the seasons change from winter to spring and tournament anglers replace their complaints about cold weather and tough fishing conditions with big, silent grins, it’s usually a sign that something really good is about to happen.

And judging from the number of quiet smiles on anglers’ faces this morning at the day-one takeoff of the Stren Series Southeast Division on Lake Eufaula, big things are about to happen on the Alabama-Georgia border.

With water levels slightly above full pool, water temperatures hovering in the low 60s and a forecast that reads like a commercial for a Caribbean vacation, it’s hard for pros who have been practicing at Eufaula to even feign a poker face.

The ubiquitous question, “Are they biting?” is only answered with a what-do-you-think smile.

“When we got here on Friday, it was on,” exclaimed Coppertone pro Wesley Strader. “I believe they would have bit a bare hook if that’s what you wanted to throw. The water level was high, and the water temperature was about 65 degrees – just perfect conditions.

“Since then they’ve pulled the water down about a foot and a half, and the water has cooled off a few degrees. But you can see the fish cruising around everywhere – I mean giants – and it’s only 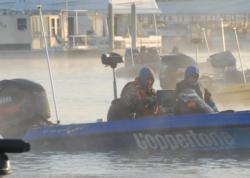 a matter of days before they go to biting again.”

M&M’s pro Pat Fisher, who won a Stren Series event here in March 2002, agrees with Strader’s assessment. He believes a few fish have already spawned, but the primary wave is just now coming to the bank.

“A majority of the fish have pulled up on the outside grass line and are just waiting for the water to stabilize and the sun to come out,” Fisher said. “Anyone in this tournament is subject to pull up on a grass bed with a spinnerbait and whack 30 pounds in 15 minutes.”

Stren Series anglers lost about 20 minutes of fishing time at the day-one takeoff due to a small fog delay. But after the fog cleared, brilliant sunshine struck the water.

“There’s no denying it,” Fisher added. “It’s going to be a good tournament.”

For bass-fishing fans unable to attend the festivities in person, you can catch all the weigh-in action live at FLWOutdoors.com with FLW Live. Show time starts at 3 p.m. today.

Anglers will take off from Lakepoint State Park located at 104 Lakepoint Drive in Eufaula, Ala., at 7 each morning. Wednesday, Thursday and Friday’s weigh-ins also will be held at the marina beginning at 3 p.m.

Saturday’s weigh-in will be held at the Wal-Mart store located at 1252 South Eufaula Ave. in Eufaula, Ala., beginning at 4 p.m. Takeoffs and weigh-ins are free and open to the public.

The Lake Eufaula Stren Series tournament is hosted by the Eufaula Barbour County Chamber of Commerce.

Pros will fish for a top award of $25,000 plus a $40,000 198VX Ranger powered by an Evinrude or Yamaha outboard and equipped with a Minn Kota trolling motor and Lowrance electronics if contingency guidelines are met.

Yamaha or Evinrude will match 50 percent of Ranger Cup earnings if “Powered by Yamaha” or “Powered by E-Tec” guidelines are met.

Competitors will also be vying for valuable points that could earn them a trip to the $1 million Stren Series Championship on Table Rock Lake in Branson, Mo., Nov. 5-8 for a shot at $140,000 in the Pro Division and $70,000 in the Co-angler Division.

After four qualifying events are complete in each Stren Series division – Central, Northern, Southeast, Texas and Western – the top 40 pros and 40 co-anglers based on Angler of the Year points standings from each division will advance to the championship.

The top 10 pros and 10 co-anglers from each division will also qualify for the 2009 Wal-Mart FLW Tour and Wal-Mart FLW Series, bass fishing’s top professional circuits, where they can compete for a share of $19.5 million. The highest-finishing pro and co-angler from each division at the Stren Series Championship will also qualify for the $2 million 2009 Forrest Wood Cup, where pros will fish for as much as $1 million – the most lucrative award in bass fishing. 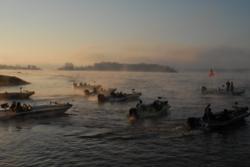