Parsons flies past competition at Texoma 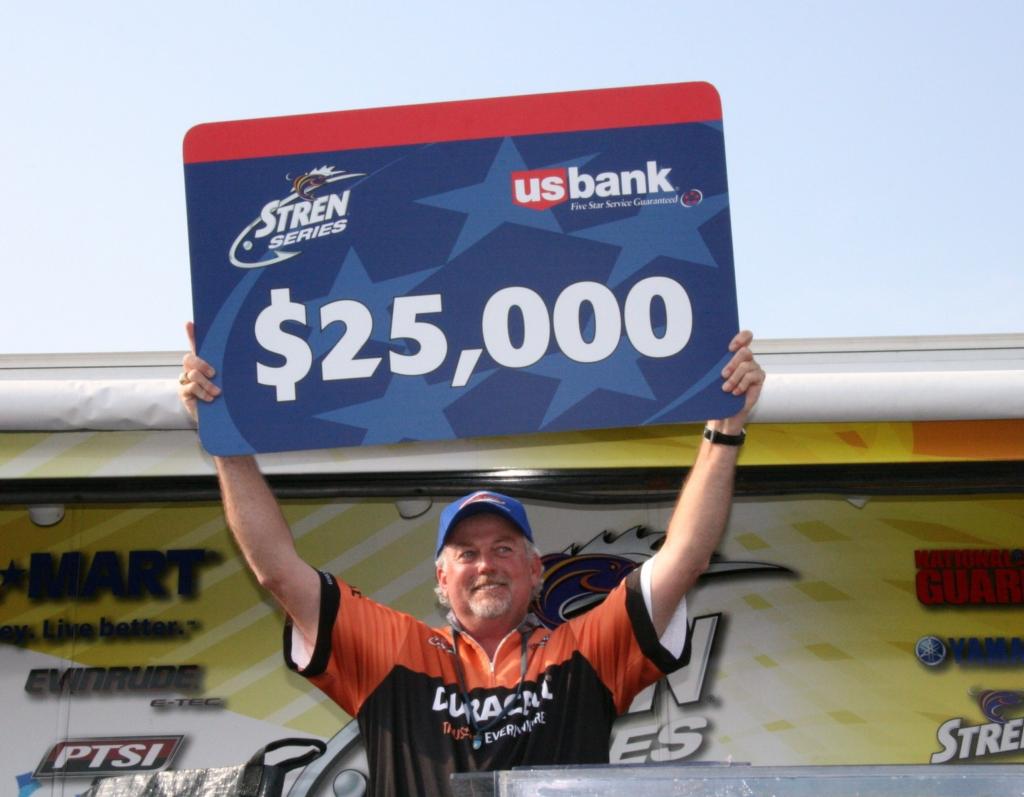 After leading the pro division for two days, Dave Parsons sealed the win with his heaviest stringer of the tournament. Photo by David A. Brown. Angler: Dave Parsons.
May 10, 2008 • David A. Brown • Toyota Series

DENISON, TEXAS. – Airline pilots are typically pretty cool customers and Dave Parsons embodied this even-keeled disposition as he brought his Stren series campaign in for the big landing at Lake Texoma.

Between tournaments, the Yantis, Texas pro flies Southwest jets high above lakes all across the U.S. After placing third on day one, Parsons grabbed a 3-pound, 8-ounce lead on day two and soared above the competition for the duration of the event. On day three, he kept a 3-pound advantage and concluded the tournament with a 14-pound, 13-ounce limit that gave him a total of 60-10 – nearly five pounds better than his nearest competitor. For his efforts, Parsons won $25,000. 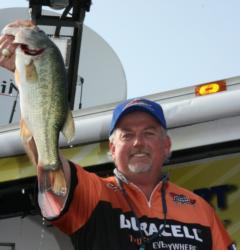 “I knew what most of the people were going to be doing and I tried that a little big, but then I decided to do something a little different,” he said. “So I went and found the dirtiest, nastiest water I could find and just flipped wood and rocks. I caught six fish this week on a crankbait and two on a spinnerbait. The rest I caught flipping.”

Parson’s bait of choice was a tossed salad color Sweet Beaver rigged Texas style with a Tru Tungsten weight. “This bait worked for me all week long.”

Throughout the week, Parsons said he struggled with fish responding to the week’s fluctuating weather – windy and stormy on day one, sunny on days two and three and then overcast and windy in the final round. Sticking to his game plan proved wise, as some who depended on wind or sunshine often found themselves scrambling to put together a backup plan.

Parson’s road to victory started slowly with a day-one performance of 11-8 landing him in 33rd place. He rebounded well, however and took over the lead for good with the tournament’s heaviest bag – 21-2 – on day two.

Considering his three decades of flying commercial aircraft, it’s no wonder Parsons was able to maintain his focus. “As an airline pilot we have bad weather and situations where we have to land the plane with really low visibility. You just have to really focus. That’s what I do when I’m out there on the water – I just put my head down and do the best job I possibly can and put something together that’s going to give me the chance to cash a check.

He threw a ¾-ounce spinnerbait most of the week, but when his primary pattern fizzled during the final 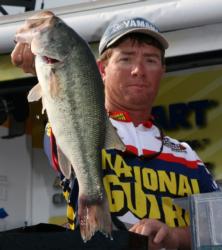 round, Mobile, Ala. pro Robert Robinson switched to a 7/16-ounce Stanley swimming jig with a chartreuse/white skirt and a Mann’s double tail trailer. Both baits effected his strategy of fishing deeper to reach bigger fish – a plan that yielded 13 pounds, 3 ounces in the final round and a total weight of 55-15.

Robinson said he wasn’t sure why his spinnerbait action vanished, but a possible explanation was the party crashing invasion by bass of the wrong color. “At a couple of my primary spots, the stripers moved in real heavy. In places where I was catching 2 1/2- to 3-pounders all week, I never got a bite (from eligible bass species).

“We caught so many stripers this morning it was ridiculous. I picked the trolling motor up and said `We have to go.’ It was bad.”

“I tried to stay in the wind,” he said. “It seemed like if I got in the slick water out of the wind, I was not getting a bite.” 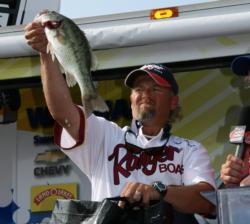 ounces, which brought his total to 52 pounds, 9 ounces. Harp thanked his “friend in the Coppertone boat” fourth-place pro Chris McCall, who hooked him up with some prototype spinnerbaits from Santone. The triple blade design, Harp said, made the bait stand out in a crowd.

“When the shad start moving around the docks and tires, you have to have all the flash you can get to attract (a bass’) attention,” Harp said. “He has half a million baits there he can chose from so you have to have something that stands out or he’ll just eat those shad that are right beside your bait.”

McCall follows the shad to fourth 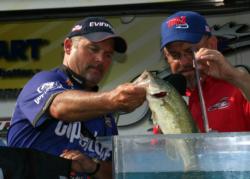 A Texoma veteran, the Jasper, Texas pro leveraged his in-depth knowledge of the lake’s shad spawn to catch his way into fourth place with 52 pounds, 1 ounce. His day-four limit weighed 10-14.

Throwing a 1/2-ounce Santone spinnerbait around docks, McCall used a steady retrieve that ran his bait just under the Styrofoam. Targeting the shad spawn around docks is a good spring pattern, he said, as bass will feed in these areas during both pre-spawn and post-spawn periods. 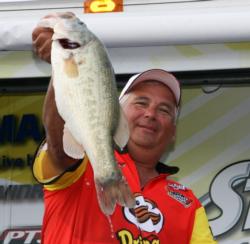