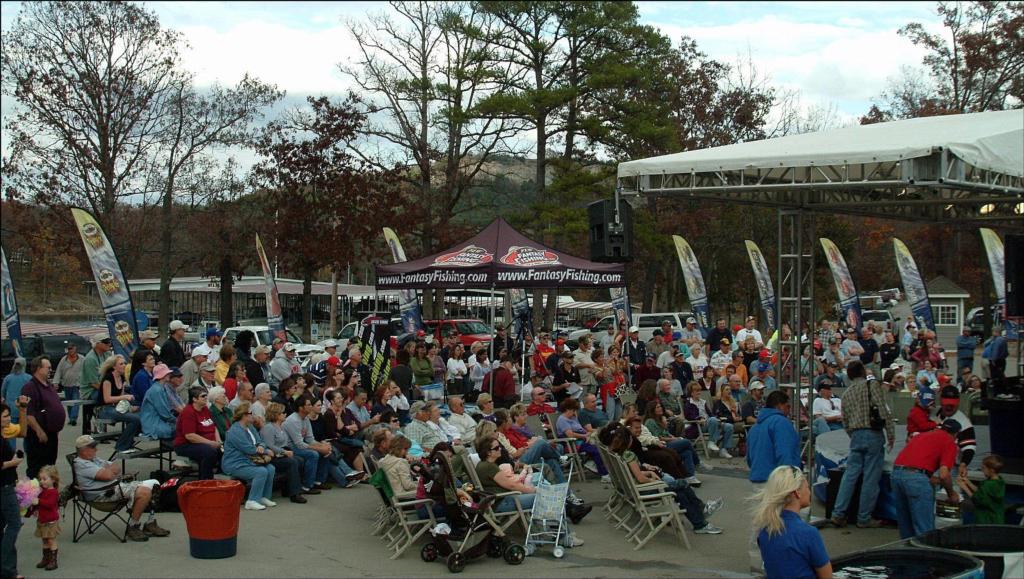 An impressive crowd was in attendance for day one of the 2008 Stren Series Championship on Table Rock Lake. Photo by Brett Carlson.
November 5, 2008 • Brett Carlson • Toyota Series

What a crowd … Normally the pro fishing scene is relatively quiet during the month of November. But the Ozark region and Branson in particular is bass country. True to form, the crowd on day one of the championship was impressive to say the least. Temperatures in the upper 70s didn’t hurt the cause as it felt more like September than November.

Green leaves for Guntersville … With Lake Amistad in his backyard, Jerry Green had bass-fishing paradise at his fingertips. So why did the pro recently relocate to Cullman, Ala.? “The main reason is that it’s just a lot closer to the tournaments,” Green said. “From Amistad, everything is a two or a three-day trip. From Cullman, we’re only one day away. Believe me, it was hard leaving Amistad, Falcon and Choke Canyon, but we love it in northern Alabama. We’ve never been in the woods before and we’ve got Smith and Guntersville real close too.” 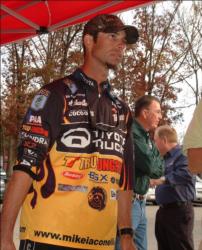 Ike update … After winning the Stren Series Northern Division points race and the season’s third qualifier on Kerr Lake, pro Michael Iaconelli has one goal left to achieve for 2008: qualify for the 2009 Forrest Wood Cup. Iaconelli, a full-time BASS Elite Series pro, is currently in 20th place overall with a limit weighing 12 pounds, 7 ounces. More importantly, he stands second among Northern Division qualifiers. If he finishes the highest of any Northern Division pro, he will qualify for the Cup without fishing a single FLW Tour event. “I started my career with FLW and it’s good to be back,” said the Runnemede, N.J., angler. “Now the bigger picture is making the Cup.” But the pro currently ahead of him is no slouch himself. That would be Dave Lefebre, currently in 12th place 13-5. Lefebre, who took second at the 2008 Forrest Wood Cup, finished second to Iaconelli in the Northern Division points race.

Storm system coming … The fishing on day one was pretty good as 46 pros managed five-bass limits. But that solid bite might take a major turn for the worse tomorrow. The high temperature Wednesday was a balmy 77 degrees with winds gusting from the south at around 20 mph. By midnight, thunderstorms will make their way to the area and the forecast for the rest of the week is dramatically cooler. While it isn’t great news, its nothing compared to North and South Dakota, who are expecting near-blizzard conditions tomorrow. 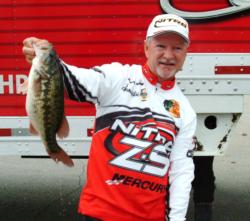 King slams trifecta … Local pro Stacey King of Reeds Springs, Mo., was one of the pretournament favorites and he didn’t disappoint today with 14 pounds, 9 ounces. What was surprising though was the variety in his sack. Of his best five bass, three were smallmouths, one was a largemouth and one was a smallmouth. Moreover, King was one of the few anglers to have multiple smallmouths and all were giants to boot. “There are so many smallmouths in this lake most people wouldn’t believe it,” he said. “You’ve just got to know where to find them.” If the cold front does have its predicted effect on the fishing, King plans to lean even heavier on the brown bass. “If it gets real tough I think I can scratch out four or five smallmouths.”

Where was No. 5 guys? … Pros Lee McCracken and Tommy Martin are probably wondering “what if” tonight. Currently, McCracken is in 16th place with 12-13 with Martin is right behind him in 17th with 12-12. Amazingly, neither pro managed a five-bass limit on opening day. With one more keeper, they both would likely be in the top five.

7-1: Weight, in pounds and ounces, of the day’s heaviest bass, caught by pro Matt Greenblatt. 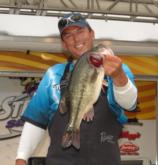 5: Number of Central Division pros currently in the top 10.

3: Number of Texas Division pros currently in the top 10.

1: Number of Western Division pros currently in the top 10.

1: Number of Southeast Division pros currently in the top 10.

0: Number of Northern Division pros currently in the top 10.

“Its like meeting one of your heroes,” – Lefebre, who had heard a lot about Table Rock Lake but had never fished it until this week.

“Sissy,” – Savannah Bosley, when asked who her favorite fish

“I love this time of year; summer and fall are definitely my strengths.” – Curtis.