Long loads up for big lead at Big O 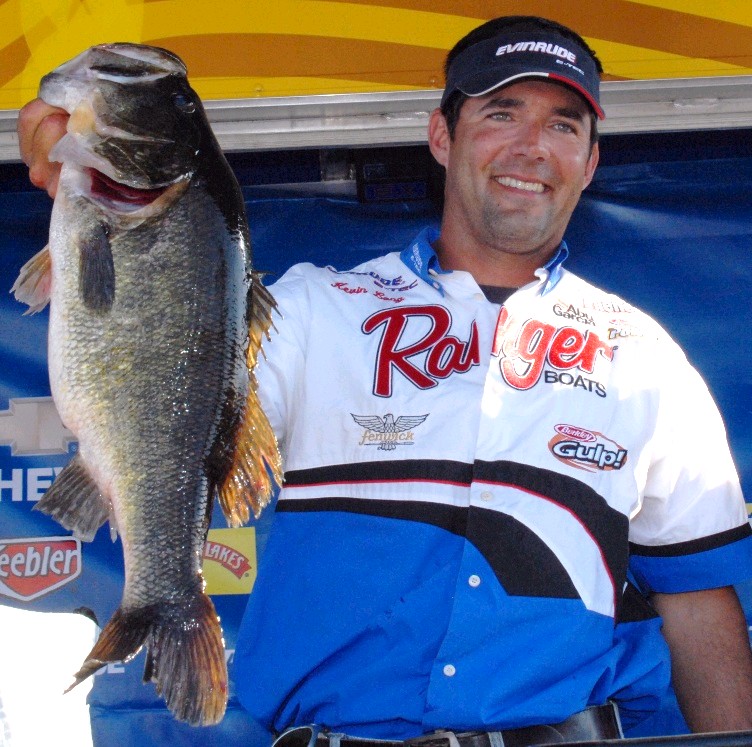 CLEWISTON, Fla. – Pros who fished the Walmart FLW Series event on Lake Okeechobee several weeks ago are discovering a different lake this week at the Stren Series Southeast event.

At the day-one weigh-in of the Stren Series event today, weights did not live up to the expectations that were created by the great catches in the FLW Series event in January.

As some predicted, many bass were caught, but the numbers of big bass and big limits were off.

Only one limit topped the 20-pound mark and that belonged to tournament leader Kevin Long of Clewiston, who sacked up 24 pounds, 3 ounces to take a 7-pound lead in the event.

Long, who guides on Okeechobee, found his productive areas thanks to a lot of hard work in trying to put his guide clients on fish over the last few weeks.

“Scott Martin has given me quite a few guide trips over the last two weeks, and that has really forced me to find some productive water for my clients,” Long said. “I have fished around this whole lake several times in the last 15 days, checking and re-checking water, and about two days ago these new fish moved into three different areas – areas I did not fish in the Series.

“I’m not fishing any different than I was in the Series – I’m still buzzing the surface with soft plastics – I’m just fishing different areas, and it’s all about the area here on Okeechobee.”

“I lost some other giants too,” he said, referring to his 9-pound kicker. “I lost another limit that was just as big as the one I weighed in. I’m pretty confident that there are still plenty of fish in these areas for the next couple of days.”

“I found her yesterday and marked the bed,” Klys said of the Big O lunker. “I eased in there this morning and made a couple of long casts into the bed with a Berkley Power Lizard. On the third cast she bit, and I’ve been torn all to pieces ever since.”

Klys said a majority of his fish came sight-fishing, but he added a couple to the well by buzzing a toad.

“I could have caught a lot more smaller bucks today, but I left them on beds for tomorrow,” Klys said. “Once I caught that big one this morning, I didn’t see any need in wasting those other bucks, and figured I’d save them. There seems to be a lot of bucks moving into the area daily, but the bigger females are rare.”

National Guard Jonathan Newton of Rogersville, Ala., is in third place with a five-bass limit weighing 16 pounds, 5 ounces.

Newton got seven bites today and boated just five of those.

“It’s a lot tougher now than it was in the FLW Series, that’s for sure,” Newton said. “The water has fallen so much, fishing over that flooded stuff is a lot harder. Back in the Series, there was a lot more water in those flooded fields of grass – you could troll through it and fish a bait over it without a problem. I think the fish are still there, but getting to them is difficult.”

Honnerlaw, Wilcox round out top five

Bryan Honnerlaw of Moore Haven, Fla., is in fourth place with a five-bass limit weighing 15

Rounding out the top 10 pros in the Stren Series Southeast event on Lake Okeechobee after day one:

This is Hinkelman’s first trip to Okeechobee, and he got treated to a day on the lake with pro Tim Rhyne.

“We were fishing in 4 to 6 feet of water, and I caught my fish on a Reaction Innovations Skinny Dipper and a Paca Craw, buzzed over the surface,” Hinkelman said.

Campbell an ounce behind

“I caught my fish on a Gambler Flappin’ Shad, a Gambler 10-inch worm and a Spro frog,” Campbell said.

Jeff Justice of Sunrise, Fla., is in fourth place with a five-bass limit weighing 11 pounds, 6 ounces.

Arnold Boshears of North Vernon, Ind., and William Wood of West Palm Beach, Fla., are both tied for the fifth-place position, each with four bass weighing 10 pounds, 13 ounces.

Darren Jeter of Marshall, N.C., caught the Big Bass in the Co-angler Division on day one weighing 5 pounds, 9 ounces.

Rounding out the top 10 co-anglers in the Stren Series Southeast event on Lake Okeechobee after day one:

Day two of the Stren Series Southeastern on Lake Okeechobee will begin Friday at 7 a.m. at Roland and Mary Ann’s Marina.