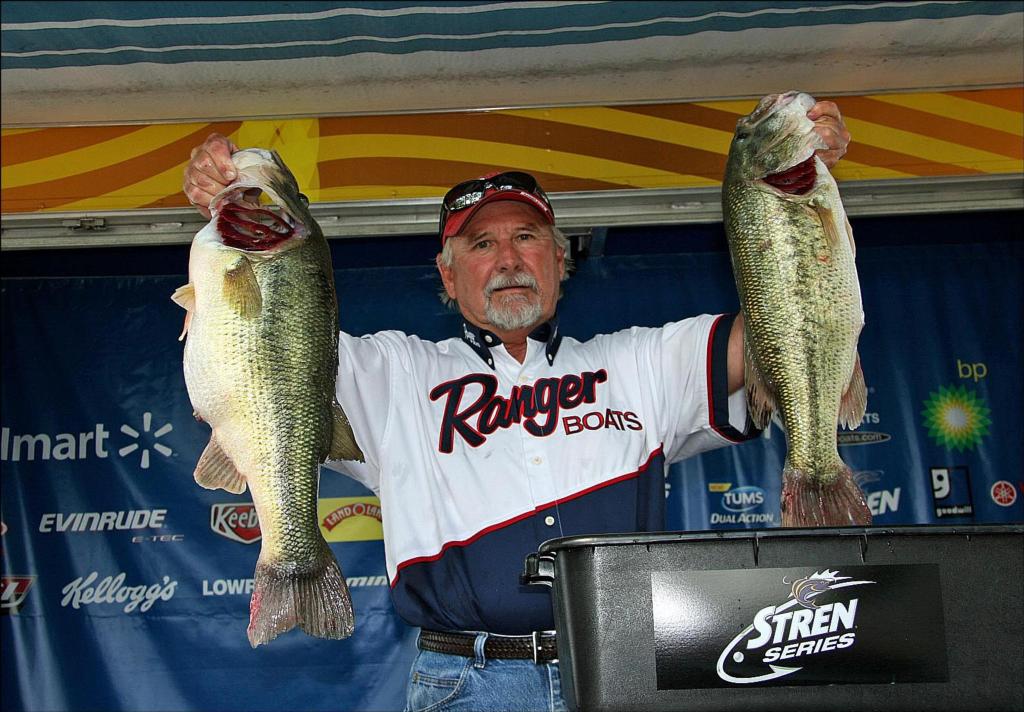 GILBERTSVILLE, Ky. – On his way to topping day one of the Stren Series Central Division event on Kentucky-Barkley lakes, Paris, Tenn., pro Tommy Ellis had to eyeball a pair of hefty largemouths before deciding which one to weigh for the Folgers Big Bass award. That’s always a good challenge to face.

Ellis won big-bass honors for his 7-pound, 12-ounce largemouth, but he said he was pleasantly surprised with the 24-pound, 4-ounce limit that gave him a 2-pound, 1-ounce lead: “I thought someone would catch (a big stringer), but I sure didn’t think it would be me. I’ve been catching 14 to 15 pounds a day in practice, but I had those two big fish and that’s what it takes.”

Fishing three miles south of the Highway 68 Bridge, Ellis targeted shoreline brush in 2 to 3 feet. He 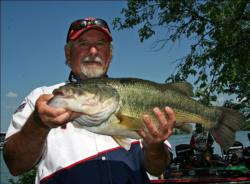 caught his fish by flipping a Lake Fork tube and a Sweet Beaver, both in green-pumpkin color. He rigged both plastics on 4/0 hooks with 3/8-ounce Tru-Tungsten flipping weights, secured with Tru-Tungsten Smart Pegs.

Ellis said that finding the right cover was essential to his success: “I looked for isolated bushes. If I could find a bush by itself, that’s what I fished. I caught one of my big fish on a willow tree.”

His better action, including the two big fish, came around noon, but Ellis reported catching fish all day. He ended up with another small limit that would have gone about 12 pounds. 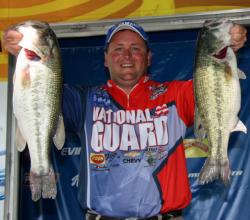 Forecasted thunderstorms never materialized, and the latter half of the day became mostly sunny. Ellis said the solar influence was a blessing.

“I liked when the sun came out. I think that’s what got them going.”

Not all fared so well, as only 85 pros and 15 co-anglers found limits. Many struggled to pick their way through high numbers of undersized fish. One such angler, Castrol pro Bobby Curtis of Siloam Springs, Ark., placed 66th, despite catching approximately 50 bass.

“I’ve never seen a lake where I could catch so many fish and not get 20 pounds,” Curtis said.

In some cases, the Tennessee Valley Authority’s water release schedule for Kentucky Dam fiddled with anglers’ game plans. The water was cranking the day before the tournament, with as much as 267,000 cubic feet per second released. That turbid flow dropped by about 18,000 cfps late Wednesday night, but the racing water continued all throughout day one.

According to the TVA’s online reservoir information, the Kentucky Dam’s release schedule should 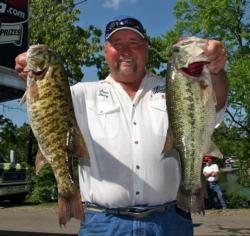 decrease to about 195,000 cfps tonight, with a lighter day-two flow averaging 188,000 cfps. The slowing water plus a full moon Friday night will likely hasten those fish still waiting to spawn.

Rounding out the top 10 pro leaders at the Stren Series Kentucky-Barkley event: 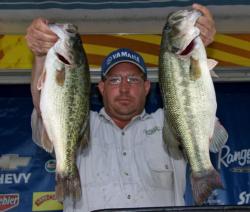 Hailing from Calvert City, Ky., home of the Kentucky Dam, it’s not surprising that Brian Somrek fared well during day one. Boating a limit weighing 18 pounds, 1 ounce, Somrek holds the top spot in his division by a little over a pound.

Fishing mostly around deep rocks, Somrek got off to an early start, secured a limit by 9 a.m. and culled up several times. He caught some of his fish by flipping and cranking, but working deep with a Strike King swimbait was his top tactic.

Somrek described his patient, productive presentation: “I’d throw a swimbait out there, let it go to the bottom and just start cranking along. They’d load up on the rod, and that would be it.”

William Campbell of Middlesboro, Ky., placed second with 17-0; and Wilby Hawkins of Hickory, Ky., took third with 16-12. Brian Futch of Goreville, Ill., was fourth with 15-13, while Ronnie Critcheloe of Kuttawa, Ky., finished fifth with 15-8.

Rounding out the top 10 co-angler leaders at the Stren Series Kentucky-Barkley event: 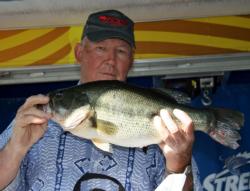