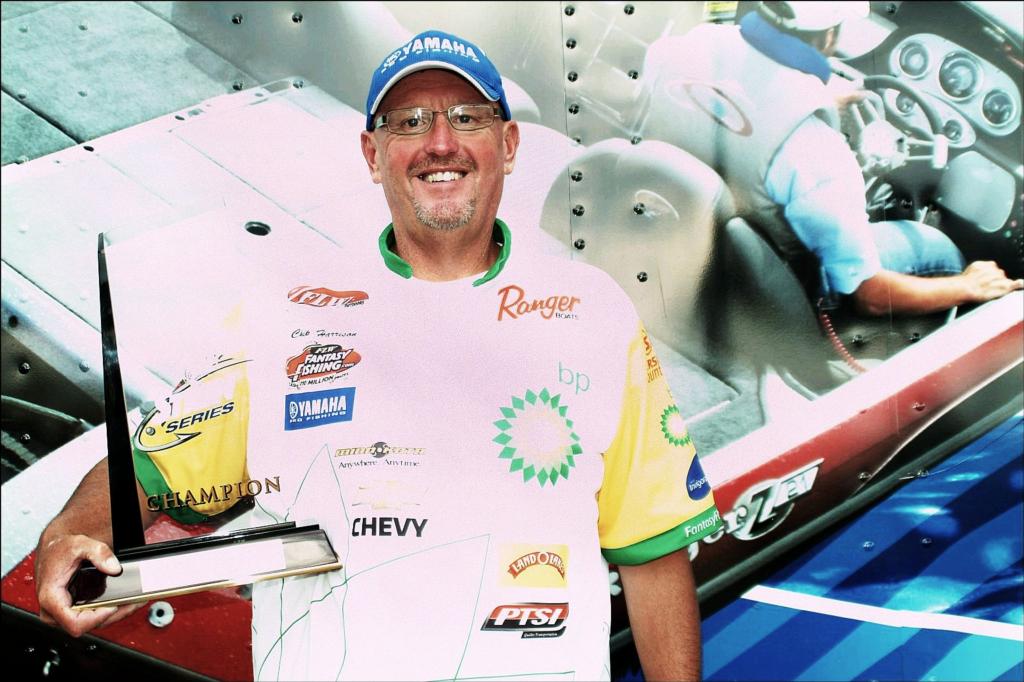 TRENTON, Mich. – For Chip Harrison, salvation came in the form of a smallmouth bass.

The 13-year FLW pro from Bremen, Ind., had just finished a Walmart FLW Tour season in which he had failed to cash a check at any of its six stops. He came to the Detroit River this week with a nothing-to-lose attitude. He came because he loves to fish smallmouth bass and because he won a Walmart BFL tournament on the St. Clair River, which is part of this system, in 2008.

Today the sting of a tough season got a little lighter. Harrison pulled 61 pounds, 5 ounces of smallmouth bass over three days to win the Stren Series Central Division tournament on the Detroit River. He went out in third place today and caught a five-fish limit weighing 20-4, the biggest bag of the day among all competitors, to separate himself from the pack by more than 3 pounds.

It had been a very close race until today. At launch Saturday morning, the top four pros were within 3 pounds of each other. Brian Hensley led, but caught 12-6 today and fell to third. Michael Trombly was second, but came back with 6-15 and dropped to sixth.

Harrison had been steady all tournament, using a 22-11 bag on day one to grab hold of second. He slipped to third on day two with a bag weighing 18-6, but fought back today in conditions that tested anglers and their equipment like few other stops in the series. Strong south winds made long-distance runs impossible. Harrison went an hour upstream to Lake St. Clair, where he caught the winning fish.

“I love Lake St. Clair,” Harrison said, “and I’m real comfortable fishing for smallmouth. Lately I’d been making bad decisions, and that’s what fishing’s all about: making the right decisions. Everybody here has the same talent. It’s just the guy who makes the right call that day.”

Harrison’s best bait all week had been a C-Flash crankbait. He found isolated rocks with a Humminbird sonar featuring side imaging. It was the single most important accessory he had in his boat this week.

“On this lake it’s more about location than anything else,” Harrison explained. “Open-water fishing can be hit or miss.”

During practice Harrison hooked a 5-pound bass. While reeling it in, another 5-pounder hit the bait as 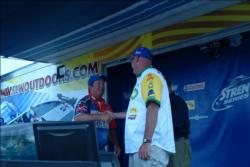 “I thought, `Why right here?'” Harrison said. “I turned on the side imaging and saw two rocks in 15 feet of water. I spent the rest of the day side imaging and found 10 or 15 other places with one or two rocks. I got a big bite off just about every one of them. Without side imaging, you’re guessing.”

Today’s successful angler needed one other piece of gear, however: a trolling motor with 52-inch shaft. It allowed Harrison to buck waves while working from the bow. With a short shaft popping in and out of the water, he wouldn’t have maintained control of the boat.

The day started rough in another way. By noon Harrison had caught just 5 pounds of fish. But he caught fire over the next two hours and brought in a five-fish limit that included two 5-pounders and two 4-pounders.

While Harrison weighed his fish, Jon Bondy of Windsor, Ontario, occupied the “hot seat,” which is a boat seat near the stage from which the current leader watches his challengers weigh their fish.

A full-time guide on the Detroit River, Bondy knows the river system as well as anybody. He used that knowledge this week to make a steady climb up the leaderboard, from fifth on day one to fourth on day two to second Saturday with a 19-9 limit that brought his three-day cumulative weight to 58-12.

Bondy found a weedless area in Lake St. Clair that measured about one-half mile in diameter and that was full of gobies and gizzard shad. He used Gulp-soaked tube jigs as his primary bait and backed them up with spinnerbaits, which he also soaked in Gulp juice.

Reflecting on the tournament, Bondy said, “The cooler weather has the fish a week or two behind where they normally would be. But I’m happy with what I did here this week.”

The pro who led the tournament after days one and two finished it in third. Brian Hensley of Edwardsburg, Mich., saw his weights drop from 22-12 on day one to 19-12 on day two to 12-6 on day three, bringing his three-day total to 54-14.

Hensley said Friday he feared his big-fish spots were not replenishing, and those fears proved to be real. He needed 18-14 to catch Harrison when he stepped onstage at the weigh-in, and his sack had two 3-pounders and three 2-pounders, which wasn’t the combination for which he had hoped.

This was Hensely’s 11th top-10 finish without a win. Six of those tournaments have been on the Detroit River. If anybody is due for a breakthrough, it’s Hensley. In Stren events here, he placed second in ’07, eighth in ’03 and third today.

Baksay adds a fourth to his Detroit River resume

Terry Baksay of Easton,Conn., is another pro who’s due to break through on the Detroit River. In 2007 he finished ninth and third in Stren and FLW Tour events here, respectively.

This year he was determined to finish higher, but his bid faltered when an 18-3 limit brought his three-day total to 53-5.

“I fished the same area I found during a tournament here four years ago,” Baksay said. “My best bait was a DT-10 custom-painted crankbait in Sexy Shad with lavender back. They really seemed to like it. Every fish I caught had it all the way down their throats.”

Murphy moves up one place

A top-five finish probably didn’t seem possible for Shawn Murphy of Nicholasville, Ky., after day one. He was 17th with 17-13. That’s a lot of places to climb over.

“My practice was horrible,” Murphy said. “That’s the closest I’ve ever been to just wanting to pack up and go home. I caught five keepers all week in practice.”

But on day one, Murphy went to a spot he had checked in practice. It finally had some decent fish.

“We caught over 100 pounds of bass off that spot between me and my co-anglers,” Murphy said.

To catch them, he dragged tube jigs.

Now Murphy heads for the Forrest Wood Cup in Pittsburgh, where he will compete as a co-angler.