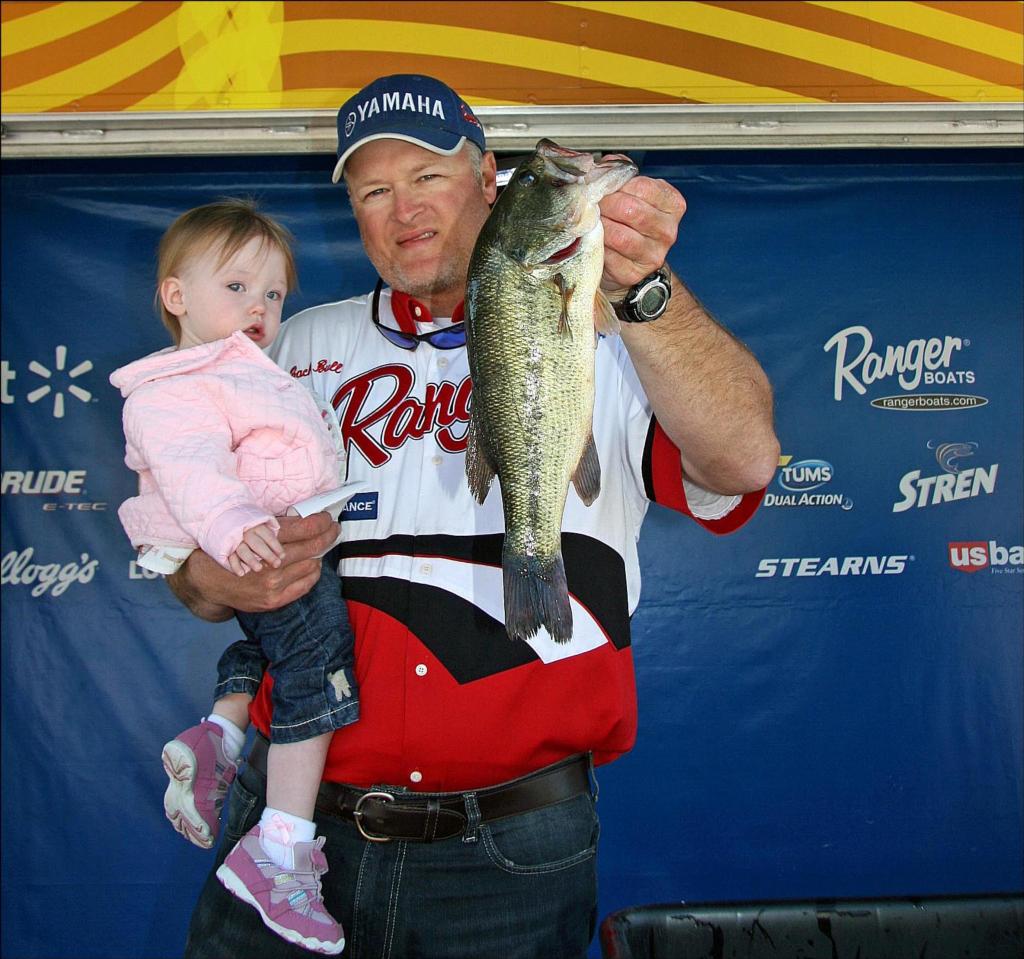 OSAGE BEACH, Mo. – They got the sun they wanted, but along with that blessing Stren Central Division anglers endured the curse of strong winds whipping across Lake of the Ozarks.

Typical of a fall cold front, day one saw cloudy skies that unleashed stormy conditions within an hour of the weigh-ins. Day two dawned bright, clear and cool as the relatively mild front dropped daytime air temperatures about 5 degrees off the day one mark. “Mild” however, would not apply to the westerly wind that kept a steady pace of 15 knots, with gusts of 20-plus.

As expected, the sunny conditions pushed bass far under the hundreds of docks scattered throughout the lake. Unlike day one, where anglers reported finding fish roaming dock perimeters and adjacent brush piles, most reports indicated that the fish were locked into the shadows.

The front, meager as it was, displaced a lot of fish. Not surprisingly, many of the big bass that had 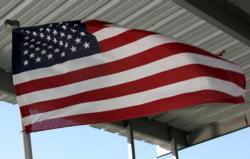 recently moved into shallower areas in pursuit of shad dropped back into deeper water, where the big blow make offshore boat handling a real thrill ride.

Tennessee pro Zack Bull held on to day one lead, despite catching only half of what he bagged in the first round. Bull caught his limit again, but his 12-pound, 6-ounce sack stood in stark contrast to the 23-13 he posted a day earlier. Nevertheless, his 36-3 total was more than enough to keep him in the top spot.

“That front last night moved the big fish out,” Bull said. “Some of the keepers stayed – I caught probably eight keepers today – but I never got a big bite. I don’t know where they moved too and I couldn’t figure out how to adjust.”

Working mostly jigs, Bull caught fish throughout the day, but picked up a pair of 2-pounders with 30 minutes left to fish. Working with the shadows, he said, was the key. “The ones I did catch were right on the corners (of docks) – they were tight to them.”

Although his day one lead of 5 pounds, 6 ounces shrunk to 3-8, Bull said he’s confident that he’ll regain his momentum in the stabilizing conditions that should arrive for day three.

“The first day after a front is always the toughest,” he said. “Hopefully tomorrow with a few more of those big fish, if I can pop 12-15 pounds I think I can win it. All I need is two of them to come back up there.” 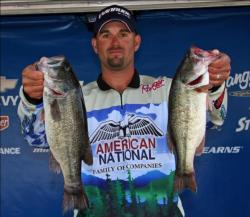 Shane Long of Sarcoxi, Mo. also struggled with the lack of big fish, although his day two weight of 14-4 was not such a drastic drop from the 18-7 he weighed on day one. Long enters the final round with 32-11.

Sticking with the same 1/2-ounce blue/black Lucky Strike jigs he threw on the first day, Long again targeted the shallow ends of docks in the lake’s Osage arm.

“I fished exactly the same way as yesterday – the big fish just didn’t bite today,” Long said. That cold front may have shut those big fish down. It seemed like I caught a lot more short fish today and I didn’t hardly catch any short fish (yesterday).”

As Long noted, precision presentation is a tough bill to fill when the trees keep up a constant rustling. “The wind was just brutal. It’s hard to flip with that wind blowing – it’s hard to be accurate. All you can do is keep the nose (of the boat) in the wind and try to make the most accurate pitches that you can. It’s just tough to do in this wind.” 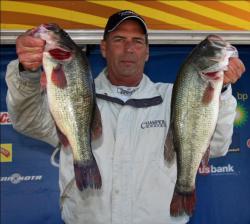 from his day one finish of 16th with a 2-day total of 31-2. Fishing 75 miles from the launch site, Bennett flipped a 3/16-ounce green pumpkin tube around docks and switched to a 1/2-ounce white/chartreuse spinnerbait when the wind intensified.

Targeting shallow docks with lots of natural forage was intrinsic for Bennett’s success. “The shad are running the banks, so you’ll catch (the bass) up in there close. The shad are ganging up for the fall and they’re starting to move back into the creeks. You can find them in certain spots and I know about four spots that have a lot of fish in them.” 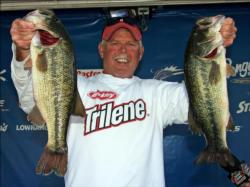 Mark Tucker of Kirkwood, Mo. jumped 14 spots to finish fourth with 30-1, while Jeremy Lawyer of Sarcoxi, Mo. took fifth with 27-15.

Rounding out the top-10 pro leaders at the Stren Series Lake of the Ozarks event:

More of the same for co-angler leader Moore

Justin Moore of Portage, Mich. bolstered his first day weight of 12 pounds, 10 ounces with another limit catch weighing 8-13 to tally a 21-7 total and retain his lead in the co-angler division.

He stuck with the same baits he threw on day one: A green pumpkin Senko on an Omega shaky head 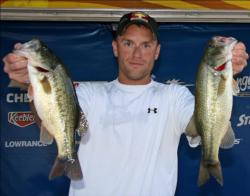 and a 1/2-ounce Rat-L-Trap in the sexy shad color. The shaky head produced a pair of his keepers and the rest bit the Rat-L-Trap.

“Boat positioning was tough, so I just tried to flip there when I could,” Moore said. “I have to thank my boater (Richard Stevens) today because he was (out of contention) and he put me in position to catch fish.”

Rick Brame of Festus, Mo. finished second with 19-5 and Brien Vaughn of Kinmundy, Ill. took third with 18-1. In fourth place, Dennis Schilb of Prairie Home, Mo. had 14-1 and Mark Horton of Nicholasville, Ky. was fifth at 13-3.

Rounding out the top-10 co-angler leaders at the Stren Series Lake of the Ozarks event: