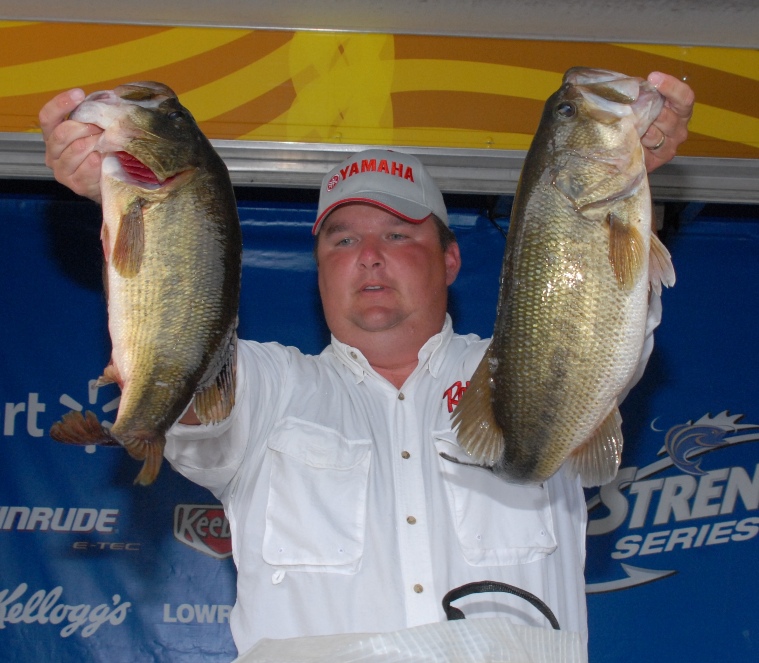 Many pros said the frog bite was on Thursday, but hooking up was a huge problem. Apparently the bass were having more fun playing cat and mouse with the fake frogs on the mats – merely bumping and pushing them – than actually eating them.

As a result, the frog bite was not as dominant as predicted, and instead some other techniques played into the leaderboard.

Instead of frogging, York relied on flipping. During practice he tried a frog, but only caught three bass on it and decided to stick with his favorite technique: flipping grass.

“I threw a frog in practice until I wore the eyeballs off it, but it just did not work for me,” York said. “I like the flipping stick, so I went to it and caught plenty of fish in practice that way. Each practice day I probably caught between 15 and 17 pounds flipping. A lot of the grass I’m flipping looks like good frogging grass, but I just prefer to flip it.”

“I caught about 13 pounds early, and then I decided to try to help my co-angler get a few keepers,” York said. “I started moving around and trying some other areas that had the right look and just kept culling up all day.”

Randall Tharp of Gardendale, Ala., is lurking in second place with 20 pounds, 9 ounces. 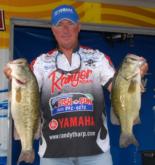 Ask just about anyone in the know on tournament fishing on Lake Guntersville, and they will tell you Tharp is the man to beat on this lake. He has dominated Guntersville’s BFL scene and won a BASS Open here last October.

Tharp has an uncanny knack for haunting Guntersville bass with a soft-plastic Spro frog, but even he said he had to resort to some flipping today.

“I did upgrade with a frog today, but by no means did I do it all day long,” he said. “I’ve got some other patterns working here, including flipping, but the frog bite has become a little dicey here the last few weeks. The fish don’t seem to be really eating it like they normally do.”

Tharp had all intentions of starting pretty close to the takeoff this morning, but by the time his boat number was called, those places were already covered up; instead he opted to make a long run to some far-away areas.

“I’ve got several good places that I never even went to today,” he added. “A lot of fishing here is really about understanding the activity level on any given place. I usually know within the first 10 or 15 minutes on a place whether it’s going to be good or not.

“If the certain things that I’m looking for are not happening, I move on. It does not mean the place is no good; it’s just that it’s not turned on at the particular time I’m trying to fish it, so I’m better off moving on to another area where bait and bass activity is more prevalent.”

Chris Lane of Guntersville, Ala., is in third place with five bass weighing 20 pounds, 8 ounces.

Lane, who fishes the Bassmaster Elite Series, recently moved to Guntersville from his home state of Florida and started a guide business.

Today he caught two bass on a frog and the rest flipping with a new KO skirt by Gambler.

“The KO skirt is like a jig skirt that goes on your line between the weight and the soft plastic,” Lane explained. “So it kind of looks like a jig, but it’s really just a Texas-rigged soft plastic.”

Lane said he is also utilizing his Power-Poles while flipping the mats.

“With so much fishing pressure out here, I think it really helps to be able to Power-Pole down on a mat that you have a lot of confidence in and fish it without constantly hitting the trolling motor and jockeying the boat around in the mat,” he revealed. “It’s almost like the longer you can sit there and just be quiet, the more the mat settles down and comes back to life without being disturbed by your noise.”

Amazingly, Ellis is finesse-fishing at Guntersville. While other pros are spooling up 50-pound braid for frog fishing, Ellis has been using 6- and 8-pound-test line on a spinning rod with weightless plastics.

Ellis is targeting docks, skipping weightless plastics all around them to target big bass suspended under the shade.

“I caught a limit early on a creek-channel bend and then moved up shallow on the docks,” Ellis said. “One of my biggest fish I saw suspended under a walkway. I skipped a weightless plastic up under there and thought it was too far in front of her. All of a sudden she opened her mouth and sucked that worm in from what seemed like a foot away – it was the coolest thing.

“The only problem with the dock bite is that it takes sunshine to make it work,” Ellis added. “And I don’t know how much more sun we’re going to get this week.”

Greg Vinson of Wetumpka, Ala., caught the Folgers Big Bass in the Pro Division on day one weighing 6 pounds, 11 ounces and worth $414.

Rounding out the top 10 pros in the Stren Series Southeast event on Lake Guntersville after day one:

Joe Sperow of Birchleaf, Va., leads the Co-angler Division after day one with a five-bass limit weighing 16 pounds, 5 ounces

This is Sperow’s first trip to Guntersville, and he is having a blast. He fished with pro Greg Pugh today and dragged a Carolina rig to catch his bigger fish.

Anthony Goggins of Sylacauga, Ala., is in second place in the Co-angler Division after day one with five bass weighing 15 pounds, 9 ounces.

Shawn Malcom of Monroe, Ga., is in third place in the Co-angler Division with five bass weighing 15 pounds, 7 ounces.

Chris Mynatt of Mascot, Tenn., caught the Folgers Big Bass in the Co-angler Division on day one weighing 6 pounds, 4 ounces. He collected $207 for the fish.

Rounding out the top 10 co-anglers in the Stren Series event on Lake Guntersville after day one: