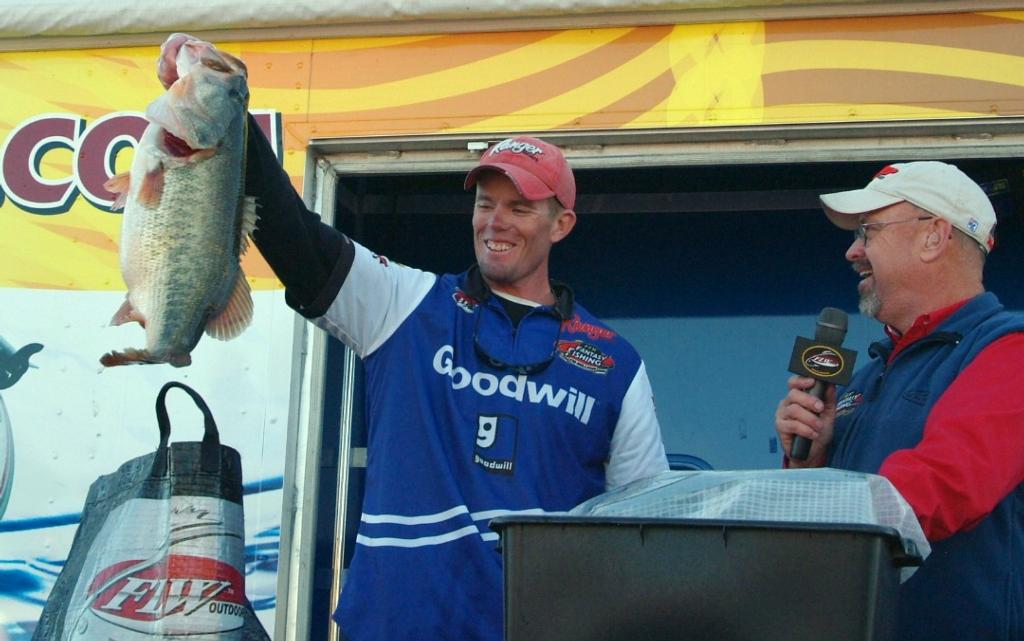 On Saturday, Jan. 9, FLW Tour pro Keith Combs recorded a five-bass limit weighing 41 pounds, 1 ounce. That stringer, caught on Falcon Lake during the American Fishing Series event, is the heaviest in FLW Outdoors history. Amazingly, Combs did not win the tournament, and thus the new record flew under the radar. Accordingly, a blow-by-blow recount is in order.

Combs lives in Del Rio, Texas, and guides on both Amistad and Falcon. Although Amistad is home, he’s been spending more time in Zapata, Texas, lately. In the days leading up to the event, Combs reported an incredibly strong bite. But a record-breaking cold front arrived in southern Texas just in time for the tournament. Instead of high temperatures in the upper 60s and low 70s, the mercury struggled to reach 40.

“I knew the fish were still there; it was just a matter of staying on the spot,” he said.

In dangerously high winds, Combs caught limits of 29-1 and 17-12 on days one and two, respectively. With one day remaining, he sat in seventh place – nearly 20 pounds off the leader. But the forecast for the final day was calm and clear. Combs didn’t think winning was still feasible, but with much improved weather, he knew he was going to whack a big bag.

Moments after takeoff, he started fishing the intersection of two old gravel roads, located within sight of the Zapata County Boat Ramp. Years ago, when the lake was low, the main road circled a farm field. Currently, it serves as a key migratory route for pre- and postspawn bass. 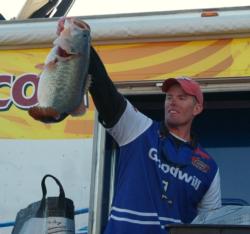 “That road runs all the way from the main river channel to a spawning flat,” Combs said. “There was one spot where another road T’d into it. You couldn’t see it through the trees; you just had to know it was there. I found it while graphing, but what you see from above the surface is just the tops of the trees.”

Combs said the road was covered with approximately 13 feet of water. But at the intersection, there was a 1-foot elevation. That turned out to be the “spot on the spot.”

Combs made his first cast between the trees and slowly dragged a Carolina-rigged Brush Hog (watermelon-chartreuse) toward the boat. Moments later he hooked up with fish No. 1 – an 8 1/2-pounder. Not a bad way to start the day.

“From there it was about every third cast,” Combs recalled. “I had a limit at 8:30 that weighed about 35 pounds.” 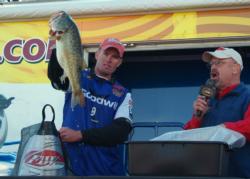 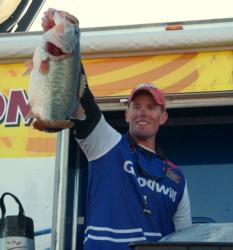 Shortly before 10 a.m. Combs hooks up with a giant of his own – another prespawn brute that weighs approximately 10 pounds. Falcon Lake bass are notorious for being mean, but he’s able to corral it into the boat. Combs said one of the keys to his success was his 7-foot, 6-inch Power Tackle flipping stick. Along with the stiff rod, 25-pound Seagar AbrazX fluorocarbon allowed him to wrench the fish from the gnarly bushes.

Combs looks into his livewell – out goes the 6-pounder and in goes the 10. At this point, he knows today isn’t an ordinary day – not even for Falcon.

But what happens next is a surprise. The bite in his little honeyhole all but dies. Did battling the big fish spook the school? Has he caught everything there was to catch? 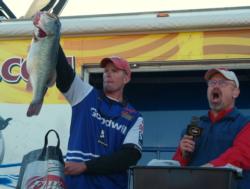 Combs reluctantly decides to leave the area and runs south toward the dam. Unfortunately, the bite is slow here too. Out of the corner of his eye, he sees a good fish rise near the surface. He immediately reaches for his spinnerbait rod and casts behind the swirl. The blade turns a few times and “wham” – fish on.

This one was almost identical to the first – a stout 8-pounder. But that was the only bass his secondary spot would yield.

“The spinnerbait fish put me at just over 40 pounds I figured.” 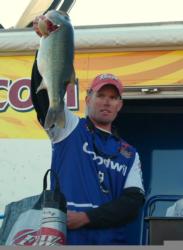 Combs then returned to his original spot – the intersection of two farm roads. On his first cast, he caught a high 7 and was able to cull the low 7. It would be his final upgrade of the day. The end result was five Falcon Lake bass weighing 41 pounds, 1 ounce.

His record catch pushed him all the way to second place, less than 6 pounds away from an improbable victory.

“To be honest, I didn’t really know what the record was. I knew Hackney set it at the 2008 East-West Fishoff, and I remember that he didn’t quite have 40 pounds.

“Its great to have the record, especially for my guide service. But, of course, the next time we come to Falcon it will be broken. We routinely catch 40s down here and even 50s on occasion.”

A quick glance at the record book proves that Combs is likely correct. Each of the top five slots are now occupied by the legendary Rio Grande River impoundment.

To contact Keith Combs about a guided trip on Falcon Lake, visit trophybassguide.com.