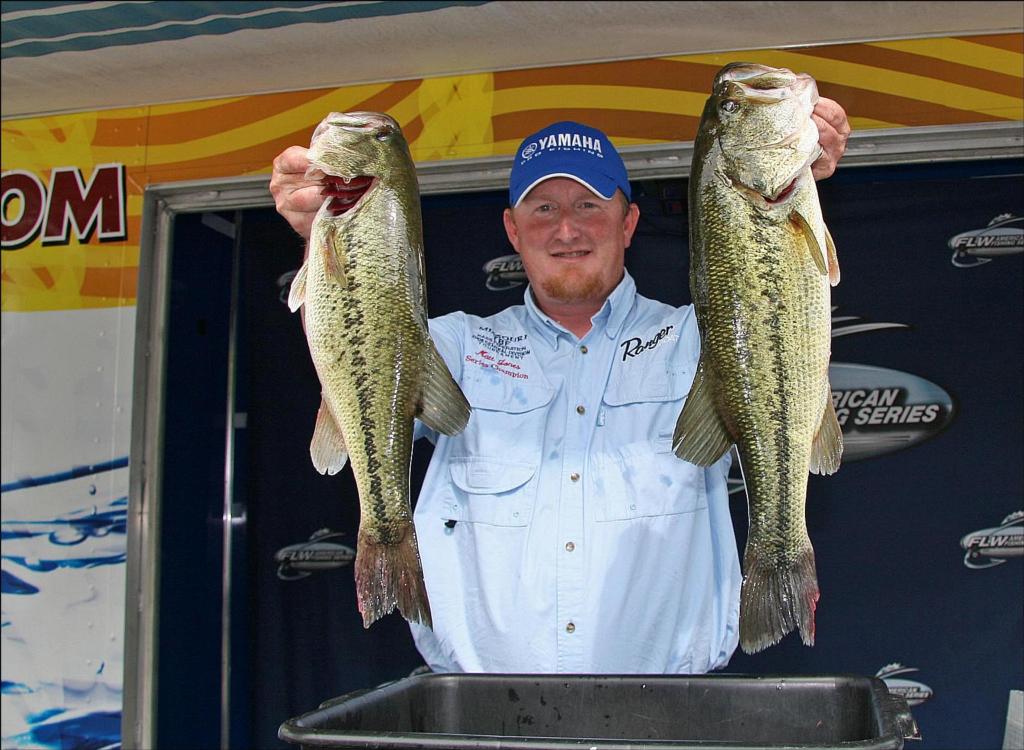 MOUNT IDA, Ark. – After topping the Day One field with a 20-pound limit, Matt Jones was concerned that he may have exhausted most of his top bed fish. However, another big limit and a second day lead of nearly 2 1/2 pounds renewed his confidence heading into the final round of FLW American Series Central Division action on Lake Ouachita.

The Spokane, Mo. pro and his competitors enjoyed another sunny day, with a high, thin cloud cover building late in the day. Wind was light, so the day offered good sight-fishing opportunities for those who had located bedding fish. Many reported finding vacated bed sites and the general consensus is that a new wave of spawners will be heading to the banks soon.

A Texas-rigged green pumpkin Zoom Critter Craw with a 5/16-ounce tungsten weight produced all of Jones’ fish. Adding 17-14 to his Day One weight of 20-4 yielded a total of 38-2 and a comfortable margin 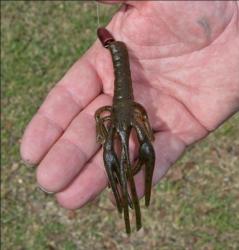 With a decent limit in his well, Jones knew he needed a kicker, so he set out to find something big enough to give him a boost. “I had about 15 pounds and I went looking (for a big fish). I was able to find a 5-pounder and that’s what got me over the hump.”

Like so many others, Jones noted that today’s bite was tougher than that of Day One – probably because the fish had been rattled by the previous day’s pressure. The common dilemma pitted time management against the determination to catch a particular fish.

“The fish I caught today, other people had probably tried to catch them but couldn’t,” Jones said. “It took me a while to catch them today. The big one was actually pretty easy – it only took me about five 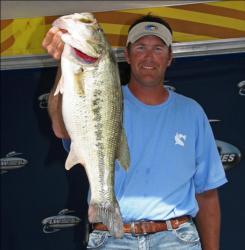 Jones targeted main lake pockets with bushes. “I was just running my trolling motor on high and checking the bushes. There would be a bass by just about every bush and I was just trying to find the ones that had better fish on them. They’ll either be on a bush, a stump or a big rock – they don’t want to be just in the wide open.”

Distance was intrinsic to Jones’ presentation. Once he located a bed, he would stay about 50 feet back and make long casts. A 7-6 G. Loomis rod with 20-pound fluorocarbon line facilitated casting accuracy, while resilient trolling motor batteries kept him in the hunt.

“Every day, once I get a limit, I’m looking for more fish,” he said. “I’ve got my trolling motor on high all day and my Pro Guide batteries are really doing me wonders. I run that motor on full blast and I still have plenty of juice when I get done.”

Utah pro Roy Hawk made a good Day One showing with an 18-pound, 2-ounce limit that put him in 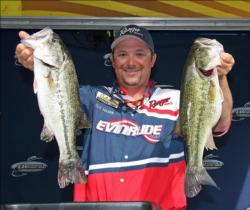 fourth place. Today, Hawk rose two spots to second place on the strength of another 5-fish bag weighing 17-9. His 35-11 total was bolstered greatly by a kicker that took all day to arrive.

“I started out throwing a topwater and a swimbait first thing in the morning until I could see really good and then I started bed fishing,” Hawk said. “I caught four bed fishing and then late in the day I caught a really nice one on a crankbait. That helped a lot in the end. That was my last cast and it was my best fish.” 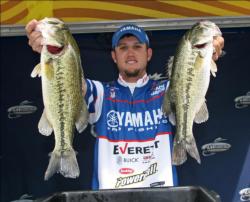 Stetson Blalock of Benton, Ark. caught a limit of 15-5, which increased his Day One effort of 19-10 to 34-15 total. Blaylock caught all of his bass sight fishing with a Texas-rigged green pumpkin Berkley Chigger Craw flipped onto beds. Today, he said, saw a much more demanding Lake Ouachita.

“It was a lot tougher today – I had to spend a lot more time on the fish I caught,” Blaylock said. “The fish weren’t nearly as aggressive as they were. My two biggest ones, I probably spent an hour and a half on each.”

Blaylock said his day was a balance of prospecting and returning to known spots. “I found some new water and fished some fish I had marked (on my GPS).” 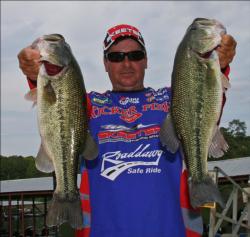 finesse worm on a light jig head and placed fourth with 33-4. Keith Green of Arkadelphia, Ark. follows in fifth with 32-10.

Keeton Blaylock of Benton, Ark. turned in a limit catch of 11 pounds, 15 ounces that nearly mirrored the 11-13 he weighed on Day One. His combined total of 23-12 pushed him to the top spot in the co-angler division.

Blaylock caught all of his fish flipping Texas-rigged Berkley trick worms and lizards. Giving the fish their space was the key – especially after the shoreline assault of Day One. “You had to stay off of them – you couldn’t get right up in their face. It was slower today. Some of them were probably caught yesterday and today was just another high-pressure day.”

Jason Scoggins of Benton, Ark. improved from fourth place to second with 21-7, while Thomas Loeffelman Jr. of Valles Mines, Mo. took third with 21-3. In fourth place, Ben Due of Mauston, Wisc. had 20-13 and Robert Prebeck of Norwood, Mo. finished fifth with 20-7.