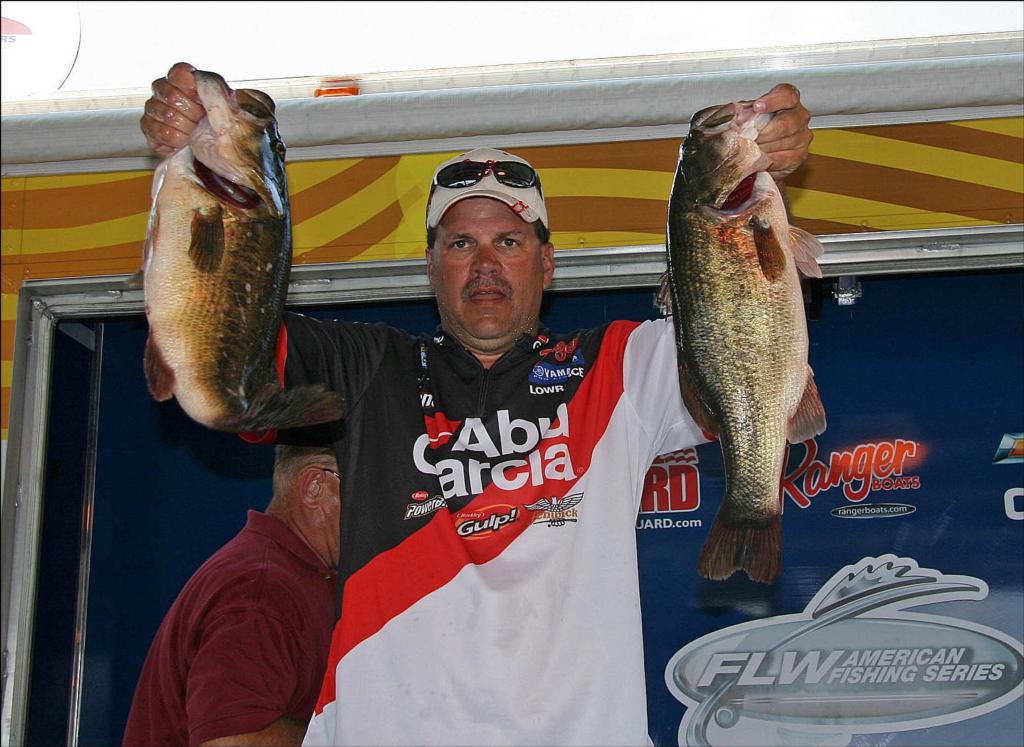 MANY, La. – If history is to repeat itself, George Jeane Jr. will need a strong performance in the FLW American Fishing Series Texas Division event on Toledo Bend. Suffice it to say that his 7-pound, 5-ounce day one lead means he’s off to a good start.

Hailing from Evans, La., Jeane won last year’s final division event, although his 2009 victory saw him finish day one in 29th place. This year, Jeane clearly has his game dialed in, as evidenced by the stunning 30-pound, 5-ounce limit he brought to the scales.

Toledo Bend was far from easy today, as many reported scraping throughout much of the hours. On 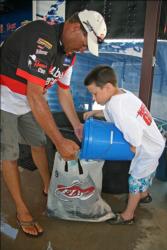 the other hand, Jeane and several others reported early action that yielded quick limits. The leading pro said he put a top-10 limit back into Toledo Bend today.

“I left my fish by 8:30 this morning – I had my (weight fish) and left the spot,” Jeane said. “I stayed in one small area this morning, making casts to one brush pile. I culled another 20-pound bag during the day.”

Jeane said he caught all of his fish on 10-inch Berkley Power Worms in Redbug color. “That’s what I’ve thrown here for 10 years and that’s what I have confidence in.” 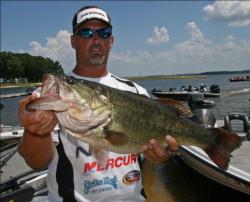 Creek channels were Jeane’s target today. The areas he fished rose from 35 feet in the channels to about 12 feet on the edges. The classic postspawn scenario was loaded with fish.

“I broke off four fish this morning before I got this five,” Jeane said. “I had two fish around 8 pounds that broke off.”

The tournament field fished in brutally hot conditions with air temperatures reaching the mid-90’s. A light breeze picked up shortly before the weigh-in, but most of the fishing day was physically draining.

Blacklock mixes it up for second

Local knowledge proved advantageous for Lake Charles, La., pro Bart Blakelock, whose 23-pound limit put him in second place on day one. “This is my home lake, so I know what they like,” Blakelock said. “I had a couple of really good days practicing and it was just meant to be today.”

Blakelock started his day throwing crankbaits, moved to a Texas-rigged worm later in the morning and 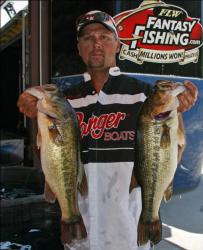 then ended his day with a football head jig. He cranked in shallower water this morning, but fished his worm and jig in 20-28 feet over drops and submerged timber in the mid-lake area.

Blacklock said the sweltering heat worked in his favor by pushing the fish deep where he wanted to target them.

Loyd sticks with jig for third

Give him credit for faith in his tactics. Gilmer, Texas, pro Lamonte Loyd started his day with a ¾-ounce 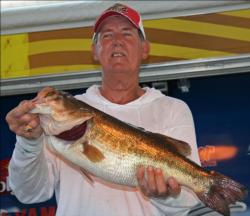 butterscotch jig and ended with the same bait. Diligence and determination rewarded Loyd with a limit catch weighing 22-12 – just four ounces off the lead.

Loyd said he discovered the jig’s effectiveness in the days leading up to the tournament. “I did a lot of cranking in practice and followed up with a jig.”

Working in the lake’s north end, Loyd targeted ridges and points in 20 feet of water. “They will come up, but I caught them going out to deeper water.”

Loyd said he caught fish throughout the day. He had a limit by about 10 a.m. and culled four times. The key, he said was a patient, methodical approach.

“I just drug that jig slowly all day,” he said. “I fished it like a Carolina rig.” 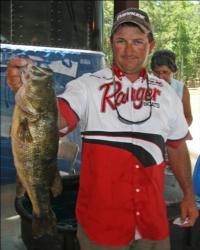 Chris Weaver, of Lawton, Okla., established the top spot in his division by catching a limit that weighed 18 pounds, 1 ounce. Weaver was one of 14 co-anglers to catch day one limits. 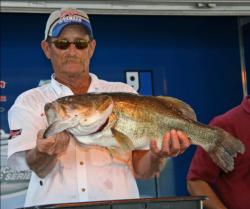 Larry Cotten of Huffman, Texas, finished second with 16-9 and David Underwood of Waco, Texas, took third with 13-9. In fourth place, Mark Howard of Mesquite, Texas, had 12-13 and Kevin Burks of Kountze, Texas, was fifth at 12-3.