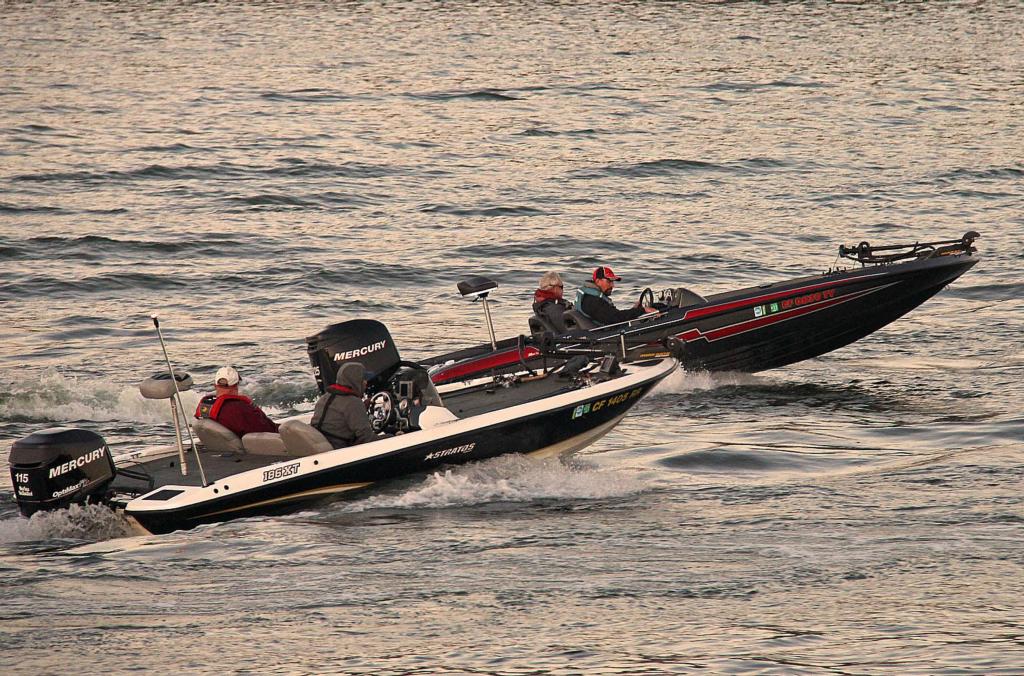 As anglers take off for a second day of Clear Lake action, they know that increasing pressure will necessitate a tighter effort. Photo by David A. Brown.
September 23, 2011 • David A. Brown • Archives

See, the good thing about opening a tournament with 120 limits, 29 bags of 20 pounds or more and lots of big fish up to 10 pounds is that such productivity confirms what everyone already knew – Clear Lake is the No. 1 western fishery. The downside, is that even a lake of outstanding population will react to intense fishing pressure. That means anglers will have to make good decisions on where to fish, dial in their tactics in short order and – most importantly – know when to move.

It’s no great revelation that many of the good spots got hammered on day one. That is the way of 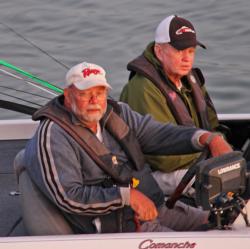 tournament fishing. Crafty anglers who get on good day-one bites will often avoid fishing some of their good water in hopes of ensuring something for day two. It’s nice when it works out that way, but with a field of over 100 boats, few secrets remain. Bottom line is that a lot of fish saw a lot of baits yesterday and the ones that did not wake up with sore lips this morning, certainly felt the pressure of yesterday’s effort.

Now, that’s not to say “educated” fish won’t bite. Moreover, various scenarios find spots replenishing, as fish come and go – usually a move to and from deep water. In any case, anglers can expect a tougher bite today and those who find the big sacks will be the ones who make the right decisions with their tactics, as well as their time.

Howard Hughes, of Redding, Calif. leads the pro field with 25 pounds, 10 ounces. On a day that heard the splash of big swimbaits resounding with great frequency, Hughes went with 6-inch finesse worms and targeted rocky bottom and ledges. His 10-pounder bit on his third cast of the day.

Trailing by just 10 ounces, Elk Grove, Calif. pro Ken Mah threw some topwaters yesterday, but he’s most confident in the flipping pattern he discovered. Having identified a particular scenario that he’s sure he can replicate multiple times today, Mah will flip an orange creature bait again today. 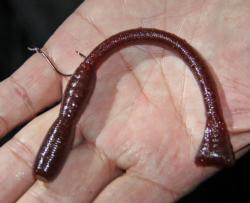 “I have three or four pods of fish I can go to, but I only used one of them (yesterday),” he said. “I think I can catch 18-22 pounds today and adding that to 25 from yesterday should get me to Saturday.”

Kazuki Kodama bagged 23 pounds on day one by wacky rigging a Megabass Vios Mineral Inch-Sic (scuppernong). Yesterday, he fished around grass and tules during the morning hours and moved to rock piles later in the day.

For Rob Riehl, who starts the day in 21st place with 20-3, staying shallow will be the primary game plan. Having caught his day-one fish on frogs, poppers, swimbaits and Senkos, Riehl surmises that increasing boat pressure will continue to push the Clear Lake fish. Some of those displaced fish will drop deeper, but Riehl’s banking on enough bass going the other direction.

“I caught all of my fish in a foot of water,” he said. “They backed off into the shade (when it got hot). They didn’t need deep water, they just needed shade, whether it was tules, weed patches or docks.”

Anglers are in for another hot day on Clear Lake. Winds will remain light and the scattered clouds that 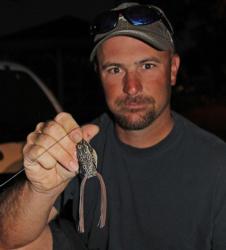 flirted with this morning’s sunrise won’t amount to much.

Anglers will take off from Redbud Park located at 14655 Lakeshore Drive in Clearlake, Calif., at 7 each morning. Weigh-ins will also be held at the marina beginning at 2:30 p.m. on Fri. and 4 p.m. on Sat. Takeoffs and weigh-ins are free and open to the public. 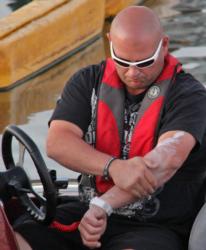 The EverStart Series tournament on Clear Lake is being hosted by Twin Pine Casino & Hotel.