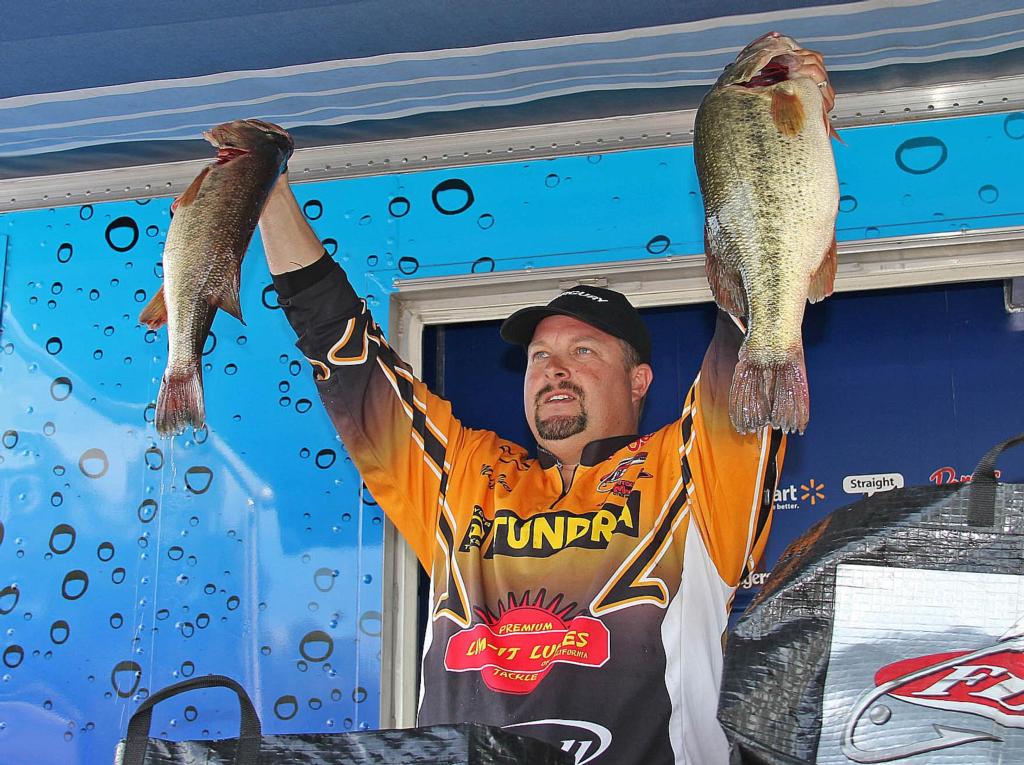 CLEARLAKE, Calif. – Michael Tuck was talking a lot of trash at Redbud Park today, but don’t fret about any lack of sportsmanship. This gentleman angler had just sealed the deal on an EverStart Western Division victory on Clear Lake – all thanks to a limber swimbait known as the Trashfish.

Made by Little Creeper Baits, the Trashfish does a good job of imitating indigenous Clear Lake baitfish like hitch and given Tuck’s primary target zone, this was a good thing to impersonate. The Granite Bay, Calif. pro spent almost the entire tournament outside of Rodman Slough in the lake’s north end. Here, he found bags of 23 pounds, 13 ounces; 25-0 and 27-12 (the event’s heaviest bag) that gave him a winning total of 76-9.

“The water was dropping (annual drawdown) in this shallow slough and all the baitfish had started their fall migration out to the mouth,” he said. “The biggest grass bed in the lake sits out front so this is the perfect place for bass to ambush prey. They were sitting out there and I was catching them every day.” 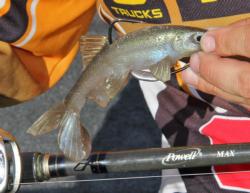 Tuck surmises that with fewer homes in the vicinity, the Rodman area gets less weed control spraying than other parts of the lake. Pairing this with an abundant food source made for the kind of scenario that bass can’t resist. That’s not to say that the fish are guaranteed to bite. In fact, Tuck found that today’s weather – approaching cold front, scattered clouds and a sporty afternoon wind – curtailed the frequency of his bites. However, he was more than happy to trade quantity for quality.

“Today was a different day,” Tuck noted. “I got a lot fewer bites but they were bigger. I think it was the changing conditions.”

Working an area of approximately 500 yards in length, Tuck found most of his fish in three to five feet of water. Rotating through a handful of particular areas within the main area prevented him from 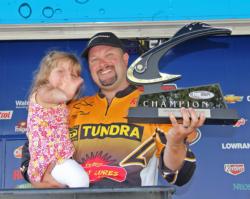 overworking anything and allowed more fish to replenish.

“I hit different key points and pockets and then I’d leave and come back,” he said. “I just kept moving.”

Arming himself with a 7-foot-6 medium-heavy Powell swimbait rod and 20-pound fluorocarbon line, Tuck used the 4- and 6-inch Trashfish models. He rigged his baits on Owner Twist-Lock hooks with ¼-ounce belly weights. He actually ran out of the smaller baits but both sizes produced fish.

Early on, Tuck experienced a letdown that threatened to derail his campaign, but he was able to refocus and keep moving forward. “I got a little sideways around 10:30 when I broke off a really big fish. At the time, I had two 2 1/2-pounders in my well and I thought `This isn’t going to happen today.’ Soon after, I backed that up with a couple of 5 1/2- to 6-pounders and I felt a little better about it. After that, I was just going throw the motions, taking it all in and enjoying it. I never thought I’d win one of these. I’ve come so close so many times. Everything just came together and I found fish pretty quickly.”

Uribe moves up to second

Joe Uribe Jr., of Lake Forest, Calif., opened his Clear Lake campaign by sacking up 22-11 on day one 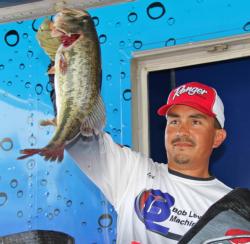 and placing sixth. A day later, he improved to second on the strength of a bag weighing 24-6. Today, the Lake Forest, Calif. pro added 24-9 and finished in the same position with a total weight of 71-10.

All week, Uribe has enjoyed a strong morning bite and endured a midday drought before picking up another round of activity in the afternoon. He focused on leveraging the early action and then working the later deal to cull up.

Uribe spent most of his time in the lake’s south end and today he focused on an area with fond memories. “I made the (top-10) cut here in 2007 at the same spot and the fish were there,” he said. 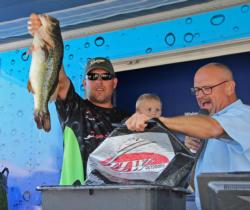 Steve Adams, of Discovery Bay, Calif., started the final day of competition in ninth place, but the Discovery Bay, Calif. pro put his head down, fished hard and made a big move up the standings to third place with a tournament total of 66-2. Adams caught 22-13 on day one and took the fifth-place spot, only to slip four notches on day two with his 21-1 catch. Today, he added another 22-4 to regain his lost ground and a little more.

Adams caught most of his fish on a Lunker Punker and a Lucky Craft Pointer 127 ripbait. “I’d throw the Punker most of the time and then I’d follow that up with the ripbait.” 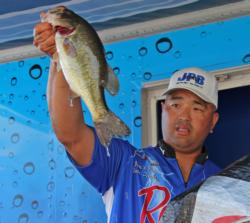 with 65-2. Mah caught most of his fish by flipping an Exite crawdad on a 3/0 punch hook with a punch skirt and a 1/2- to 1-ounce weight. Like the past two mornings, he spent the first couple of hours throwing an old-school propbait shallow for big fish.

“When you get here, you have to fish to win – you can’t just stay where you’re at,” he said. “You have to take chances and I did that today. I’d rather go down swinging than just try to maintain my position.”

Echoing the praises frequently extolled by fellow competitors, Mah said Clear Lake gave him and the other finalists plenty of potential. “I live near the (California) Delta and that’s one amazing fishery, but this place is just unbelievable. The number of 3- to 5-pound bass that live in this lake and are willing to bite day in and day out is amazing.” 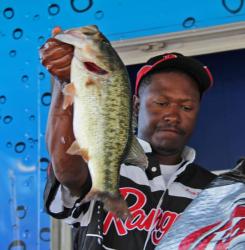 For Mark Daniels, of Fairfield, Calif., days two and three have ended with fifth-place finishers of whisper-thin margins. Yesterday, Daniels tallied a two-day total of 44-13, just 3 ounces behind Charley Almassey’s fourth-place total of 45-0. Today, Daniels settled into the fifth-place spot with 65-1 – just an ounce short of Mah.

Daniels caught his fish on mix of swimbaits, jigs, flipping baits and dropshots. “I mixed it up a lot today. I wish I could have had some bigger bites, but I got the job done and it was fun.”

Dobyns earned the Strike King Angler of the Year award for the EverStart Western Division.