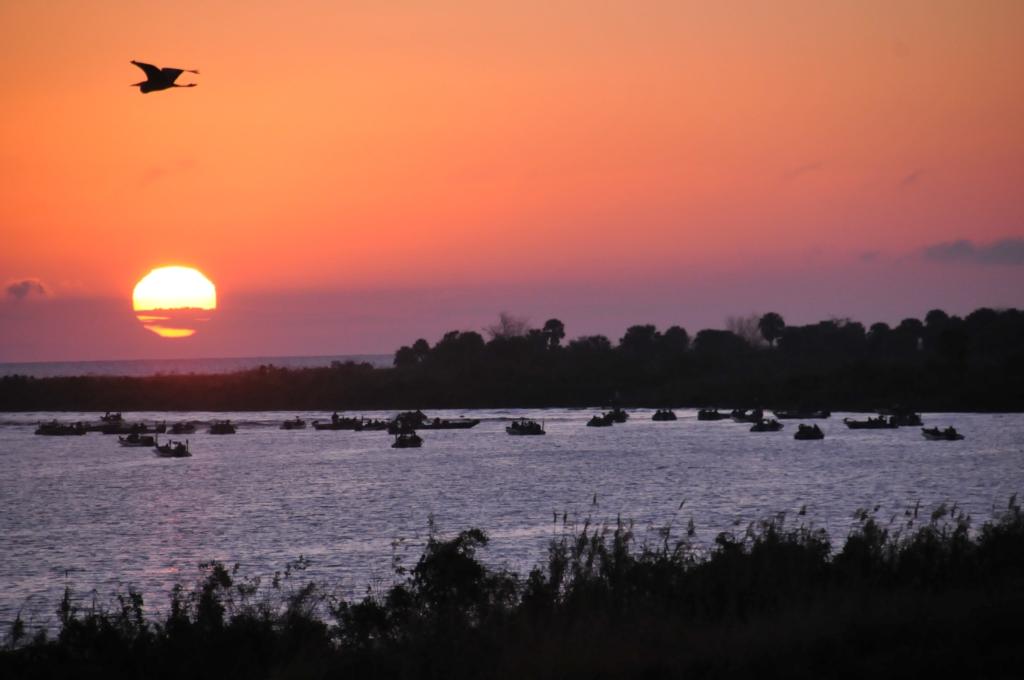 A tremendous sunrise dawns on the start of the 2012 EverStart season. Photo by Rob Newell.
Perfect weather and water will bring ‘wow’ to weigh-in
January 19, 2012 • Rob Newell • Toyota Series

OKEECHOBEE, Fla. – Seventy-six degrees. That’s a daytime high temperature that many cities across the U.S. will not see for many months. But in the lower half of Florida in the middle of January, a daytime high of 76 degrees is business as usual.

Seventy-six degrees just happens to be the projected high for day one of the EverStart Series Southeast Division season opener, adding icing to the proverbial cake of perfect conditions that will create a parade of big bass at this afternoon’s weigh-in.

After last week’s BFL, where it took 30 pounds to win and 13 limits topped the 20-pound mark, pros have all but given up the typical sandbagging act which usually precedes bass tournaments. Simply put, there’s no hiding it when Okeechobee is at its best and everyone knows it.

Okeechobee put on an unforgettable display of big bass last year at the Walmart FLW Tour opener, which rewrote entire volumes of the FLW record books. Now the Big O’s best anglers are saying that the lake is actually in better shape now than it was last year.

Brandon McMillan, who won last year’s FLW Tour Open with a record weight of 106 pounds, 10 ounces – and also placed second in last year’s EverStart event – says Okeechobee has become a “freak show” when it comes to numbers of big bass.

McMillan caught his fish in 2011 by flipping and punching thick, matted vegetation at a time when many other competitors figured the water was too low to flip and instead resorted to sight-fishing and buzzing soft plastics on the surface. But with the lake at least a foot higher and a lot more matted vegetation available, the flipping game is now prime time at the Big O and many know it.. 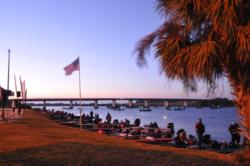 “Basically the water is higher and clearer than last year,” McMillan said. “There’s also a lot more grass and vegetation. In all, the lake’s even better than it was last year. The only down side for me is a lot more people are flipping now. Last year, with the shallower water, I kind of had that flipping deal to myself. But this year, with so much matted stuff with plenty of water under it, a lot of people are flipping again.”

“I’m going to make a bold prediction here and say that the guy who wins this tournament is going to be…flipping!” laughed Peter T.

“It’s all lining up for some real magic here this week,” said Tharp. “We had a front a few days ago that dropped the water temperature to nearly 60 degrees and now it’s rebounding back to around 65. The air temperature is going to be in the mid 70s today with a little wind and we got a new moon coming up. Yeah, it’s going to be special.”

One Okeechobee standard that does not seem to be in the cards this week is the buzzing of soft plastics on the surface.

Lane and Koby Kreiger said they have spent time in the “back ponds” looking for the buzzing topwater bite but it seems to be mysteriously absent.

“I’ve been all back in those places behind the reeds and I’ve seen some of the most beautiful water you can imagine,” Lane said. “Some places have old beds in them, but I have seen very few fish. I don’t know why they’re not back there other than there is just so much clean water out in the main lake, maybe they’ve gone to spawning out there – who knows.”

Among the weight estimates from the experts, most believe the 20-pound mark will be broken by 20 to 30 pros today and several, including McMillan, Tharp, Lane, Kenny and Lane, estimate there will be two to four bags over 30 pounds. 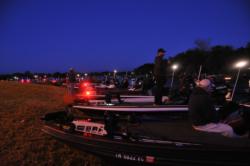 Anglers will take off from C. Scott Driver Park located at 10100 West Highway 78 in Okeechobee, Fla., at 7:00 each morning. Thursday and Friday’s weigh-ins will also be held at the marina beginning at 3 p.m. daily. Saturday’s final weigh-in will be held at Walmart located at 2101 S. Parrott Ave. in Okeechobee starting at 4 p.m. Takeoffs and weigh-ins are free and open to the public.