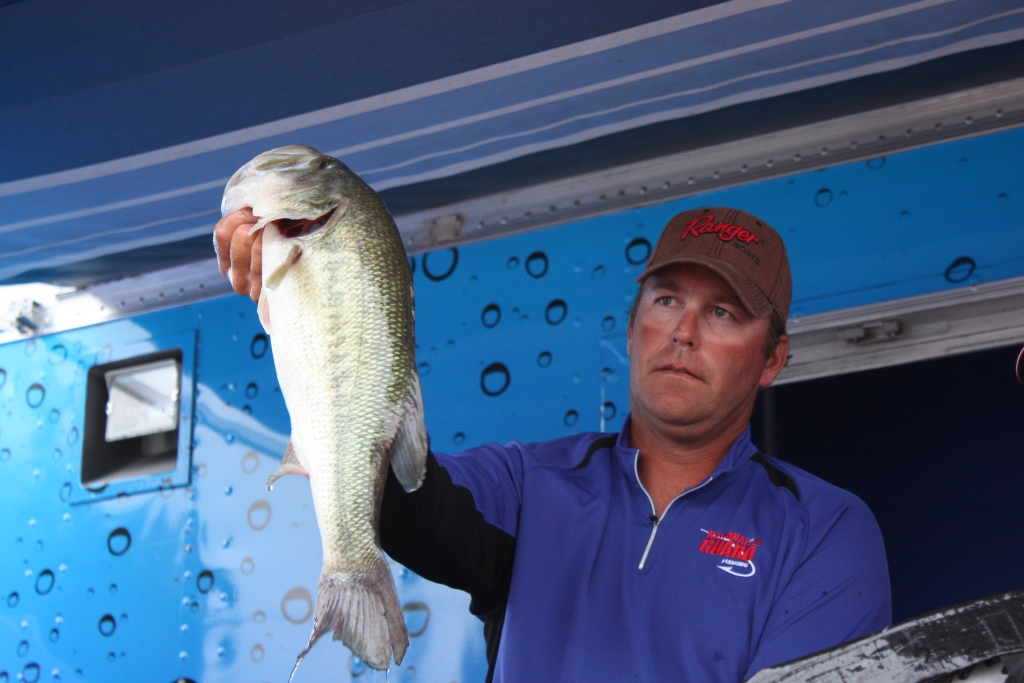 Randy Haynes brought in the day's heaviest stringer - a limit weighing 19-10 - to win the EverStart Central on Kentucky Lake with a three-day catch of 54-6. Photo by Jennifer Simmons. Angler: Randy Haynes.
May 12, 2012 • Jennifer Simmons • Toyota Series

BENTON, Ky. – Randy Haynes dominated the final day of EverStart Series Central Division competition on Kentucky Lake, weighing in a 19-pound, 10-ounce limit that earned him a decisive victory by a margin of almost 4 pounds.

To illustrate just how strong Haynes’ final-day performance was, the weight difference between the No. 1 pro and the No. 10 pro heading into the final day was the same as Haynes’ ultimate margin of victory – about 4 pounds. Haynes increased his weight each day of the tournament, starting with 15-5 on day one and following that up with a 19-pound, 7-ounce stringer yesterday that put him in third. His 19-10 haul today put his three-day total at 54 pounds, 6 ounces. 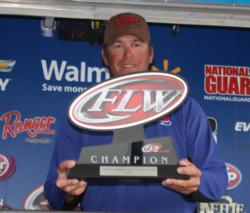 His catch today was easily the heaviest of the day, despite the fact that he said on stage that he had one fish he couldn’t cull. He caught his bass making the long run south of Paris, Tenn., a risky move considering the sizable tournament launching from there this morning.

The pair hit hole after hole on the same stretch of lake today, just on different sides, and the two were fortunate in that they somehow managed to avoid the crowd that plagued other competitors today.

“I had no trouble getting to my spots,” Haynes said.

Though Haynes ultimately caught the heaviest bass, he was throwing the exact same bait as most of the finalists – a Strike King 6XD crankbait. He also used a 1-ounce Strike King jig to land some bass.

Even with a strong sack of bass today, Haynes said he still didn’t think he had the victory in the bag. “Not against this crowd,” he said. “On the first day, I didn’t do so good and made some bad decisions.”

They didn’t come back to haunt him. Described by his day-three co-angler as a “ledge legend,” Haynes did do some ledge fishing this week, though he did say they had to be really deep on a river ledge to bite. 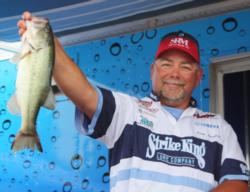 Lashlee’s catches over the tournament’s three days were remarkably consistent, as he caught 16-4 on day one, 16-15 on day two and 17-6 today. He was fishing Kentucky Lake and running south as far as New Johnsonville, Tenn.

“I caught all my fish on creek-channel drops and river ledges, and I caught every single fish on Strike King lures,” he said. “The big fish were very hard to come by today, but the big fish are big for a reason.”

Lashlee has 22 top-10 Kentucky/Barkley finishes in FLW Outdoors events, including four wins, but said he experienced a much different Kentucky Lake this week.

“I have never seen the lake this low this time of year in all my years fishing here,” he said. “The lake is fishing really weird. I’ve never seen the fish move like they’re moving, and I’m sure it’s because there’s no current.”

Lashlee estimates he was hitting as many as 30 spots per day to find his bass. 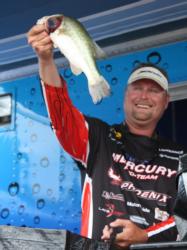 Jason Lambert of Pickwick Dam, Tenn., ended the first day in third place and finished there as well, having never left the top three during the course of the tournament. He caught 19-7 on day one, 16-7 on day two and brought in a five-bass limit today weighing 14-9 to bring his three-day total to 50 pounds, 7 ounces.

Interestingly, Lambert was the last person to get in to this week’s tournament, slipping in during the final minutes of Wednesday night’s registration. He’s a Tennessee Pickwick stick and says Kentucky Lake is “not quite right yet.”

He too was running way south on Kentucky Lake – 69 miles one way, to be exact – using a Yank-Um football-head jig and, of course, a Strike King 6XD.

“I got one big bite this morning, and it was the second fish I caught,” he said. “I thought I had something, but I caught 40 to 50 keepers one ounce at a time. There was a lot of traffic down there. That other tournament killed me today.”

Because of the crowd, Lambert was only able to hit two of his spots today out of the six or seven that had stayed productive for him throughout the tournament. Before the tournament began, he had located 31 schools of fish.

For this third-place finish Lambert earned a check worth $10,000.

Ricketts, Griggs round out top five

Lance Ricketts of Madisonville, Ky., led days one and two but fell to fourth on the final day with a 13-pound, 9-ounce limit that brought his three-day total to 49 pounds, 10 ounces, worth $9,000.

“Not to make excuses, but there were a lot of boats out there,” Griggs said. “I needed sunshine today.” 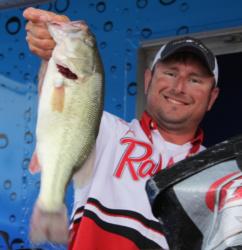