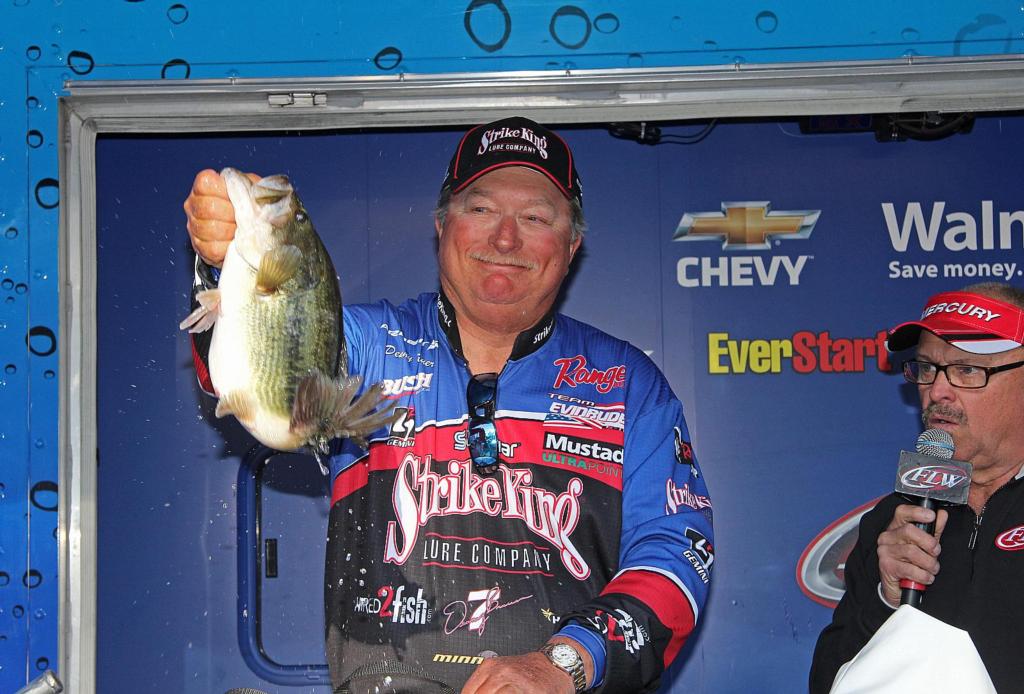 HEMPHILL, Texas – Suck it up. Tough it out. Play through the pain. Sounds like the mental pep talks common to the football field, hockey rink or basketball court, but that thought kept legendary bass pro Denny Brauer in the game and on his way to an EverStart Series Texas Division victory on Toledo Bend.

Brauer explains: “This is one of those tournaments that almost didn’t happen for me. I took a terrible fall in the boat on Monday when I bumped into a stump. I was so sore that I almost went home on Wednesday. I’ve never quit a tournament in my life so I thought ‘I’m gonna limp through it and stay close (to the takeoff site),’ and that’s what I did.”

Brauer did indeed remain in the lake’s south end and he’s no doubt glad he did, considering the tales of wet-and-wild adventures from those who braved the brutal waves of a wind-whipped lake and ran to Toledo Bend’s upper reaches. Many competitors lamented the bone-jarring rides they endured, but Brauer’s veteran wisdom served him well in sizing up this deal.

Similar to most of his competitors, Brauer targeted prespawn fish around hydrilla, but that’s where 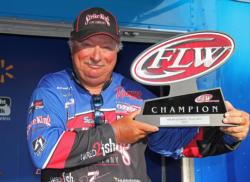 the similarity ended. Common throughout the field were moving baits – a lot of squarebill and lipless crankbaits – fished over grass-lined drains. Brauer took a different approach and worked docks in prespawn areas.

“All I did was cover a lot of boat docks and made a lot of pitches,” he said. “I wasn’t getting a lot of bites. I was just fortunate that I was able to capitalize on most of the bites I got.” 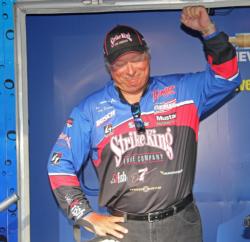 The tournament started off with a 3-hour fog delay, so the opening round saw many scrambling to get something going in a severely shortened day. Day one was further hampered by windy conditions and cooler temperatures. Brauer kept it conservative and placed third with 16 pounds, 14 ounces. On a calm and sunny day two, he sacked up 22-10 and took over the lead with 39-8.

“Yesterday was easy; today was a total struggle,” Brauer said. “You think you’re going to be able to go out there and find new water and find new fish and the first bite I got came off. I hadn’t lost a fish the whole tournament and I thought ‘Boy, I hope I don’t have a day like that.’ Then, five minutes later I catch a really big fish. That turned the day around and I got a little momentum going, but I worked for everything I got.

“The bites were so light, you didn’t know if you had grass or a fish. Today, I probably had half a dozen fish that would just mush-mouth it and not take it.”

Brauer said he wasn’t taking any chances on missing possible bites, so he attempted to set the hook on anything that remotely felt like a bite. Doing so enabled him to connect with 17 pounds of bass that gave him a three-day total of 56-8 and a winning margin of 2-12.

Day-one leader Dustin Grice came out of the gate strong with 20 pounds, 2 ounces – the only day- 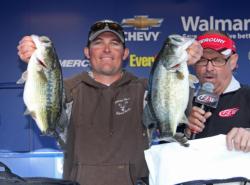 Grice also spent his three days in the lake’s south end and he fished grassy drains. He said his biggest challenge was adjusting to the wind and he had to move around quite a bit to stay on the vegetation’s clean side.

“I got (the rig) out and within 15 minutes, I was calling him again because I had caught six and I caught another one while I was on the phone with him. I owe a lot to him for helping me out like that.”

Grice targeted outside grass lines and drains in about 8 feet of water. 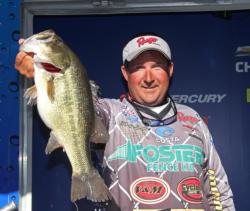 Local pro Stephen Johnston of Hemphill, Texas, was the tournament’s comeback kid. With tons of Toledo Bend experience, Johnston admitted to getting in a rush after the day-one fog delay and fishing too fast. The result was a disappointing performance of one 3-pound, 9-ounce fish that landed him in 62nd place. Clearly, that didn’t set well with Johnston, as he roared back on day two with the tournament’s heaviest bag (24-7) and secured a final-round spot in ninth place. Today, he added 18-6 (the heaviest bag of the final round) and finished third with 46-6.

“After that fog delay, what I should have done was turn off the clock on my Humminbird (electronics),” he said. “I kept looking down and I’d fish, fish, fish; pick up the trolling motor; run and fish, fish, fish. Before I knew it, it was 12:30 and I didn’t have a bass. I said ‘This is going to be so embarrassing coming in here with my home crowd with no fish. Then I caught one and I really felt bad about coming in.”

Johnston said he anticipated most of the field fishing shallow, prespawn areas, so he decided to avoid that pattern. He targeted secondary points and fished a V&M lizard on a Carolina rig and a Texas rig. 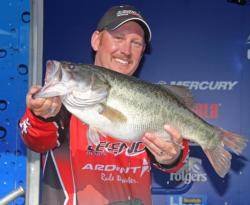 “That (big fish) was on my 10th cast of the day,” Francis said. “I lost probably four or five fish on a jig today and that’s probably what cost me. But I had seven or eight keepers.”

Francis caught his fish on a peanut butter and jelly Revenge football jig in 8 to 12 feet of water. He mostly fished the south end, although he made a run north on day two and caught a couple of keepers. 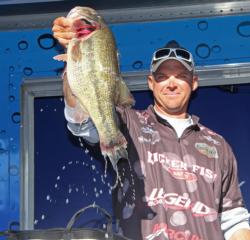 Todd Castledine of Nacogdoches, Texas, continued his path of improvement on day three. He placed 14th on day one with 12-10 and gained seven spots a day later with his biggest bag of the tournament (17-2). In the final round, he added 15-8 and wrapped up with a total of 45-4.

Castledine’s big story of the week unfortunately meant nothing to the tournament, but still netted him significant accolades, along with bragging rights to an incredibly improbable accomplishment. In the proverbial nutshell, Johnston caught a 10-pound, 6-ounce bass in January 2012 and entered it into the Texas Share Lunker program, which recognizes anglers who boat bass over 10 pounds, while encouraging catch-and-release. Well, during practice, Castledine nets a behemoth weighing 12-6 and its archival tag identified it as the very same fish that Johnston had caught a year prior.

Of the good-natured rivalry he shares with Johnston, Castledine joked: “It doesn’t matter what happens in this tournament, I can say I beat Stephen Johnston by 2 pounds.”

Rounding out the top-10 pros at the EverStart Series Toledo Bend event: