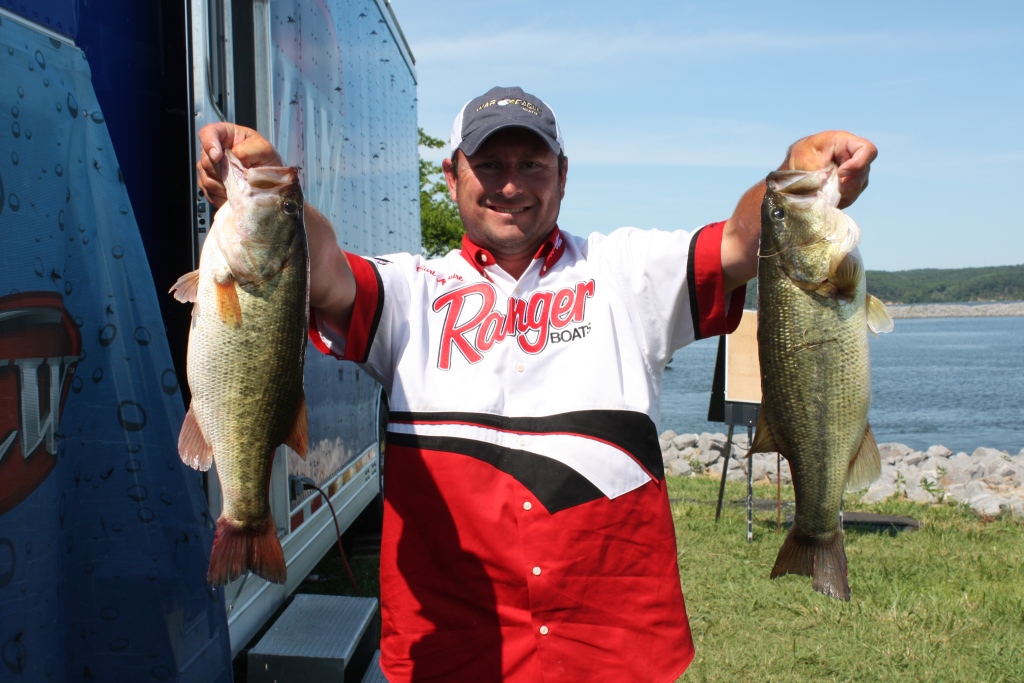 HARDIN, Ky. – The top three slots on the leaderboard remained unchanged after two days of EverStart Series Central Division competition on Kentucky Lake, as Curt McGuire continues to lead David Gnewikow and Clent Davis in his quest to score another win on his home lake.

There was movement the rest of the way down, though, as Mark Rose was the only other angler from yesterday’s top 10 to make the cut. Interestingly, every angler in the top 10 improved their catch today except for McGuire, Gnewikow and Davis, and though McGuire struggled through a more difficult day, he still brought in one of the day’s heaviest catches at 22 pounds, 6 ounces. His two-day total of 47 pounds, 8 ounces gives him a 3-pound, 5-ounce edge heading into the final day.

But the bass he caught today were more hard-won than yesterday’s, as the Paris, Tenn., pro once again headed south only to find himself largely out of luck on Thursday’s hot spots.

When asked what the difference was, McGuire said they simply didn’t bite.

“We ran around, and we’d catch a little and catch a little,” he said. “I didn’t have any schools of all big ones. I was just trying to find one to bring in from each school.”

Though he widened the gap between himself and his closest competitor – yesterday he led Gnewikow by only an ounce – he knows tomorrow is far from a sure thing for him.

“I’m not going to run out of fish, but the big ones are hard to come by,” he said. “Hopefully I can find a school that I didn’t burn through.” 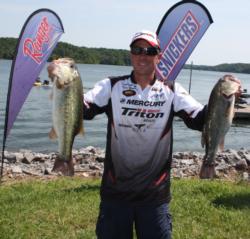 Gnewikow struggles but hangs on

After catching 25 pounds, 1 ounce on day one, David Gnewikow of Mount Juliet, Tenn., brought to the scales 19 pounds, 2 ounces today, bringing his two-day total to 44 pounds, 3 ounces. Though his weight fell nearly 6 pounds, he still leads the No. 3 pro by 3 pounds, 9 ounces.

“Yesterday was really good,” he said. “Today was a real, real struggle.”

“On my primary area, I caught a 5- to 6-pounder on the first cast,” he said. “Then I broke off another 5-pounder, and that just shut them down.”

Gnewikow was fishing the bass-rich area of New Johnsonville, Tenn., and with a 150-boat tournament launching there tomorrow, he knows his time there may be through, as he had some observers today who will be fishing that event in the morning.

If that happens, Gnewikow plans to “scrap it and see what happens,” adding that he feels confident he can catch them if he can find them. 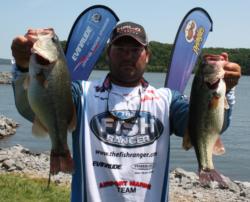 Davis runs and guns to third

Yesterday’s No. 3 pro Clent Davis of Montevallo, Ala., caught 18 pounds, 14 ounces today to retain his third-place spot with a two-day total of 40 pounds, 10 ounces.

Davis is fishing ledges on Kentucky Lake in 10 to 27 feet of water.

“I’m looking for thousands of bass on my graph,” he said.

Though he said his morning started slow, he has plans to go for broke tomorrow. 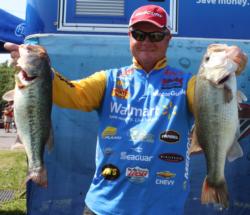 Morrow, Rose round out top five

Sam Morrow of Smyrna, Tenn., caught 23 pounds, 7 ounces today, quite an improvement over his day-one catch of 16-15, to end the day in fourth with a combined weight of 40 pounds, 6 ounces.

Behind him in fifth is Walmart pro Mark Rose of West Memphis, Ark., with 38 pounds, 9 ounces. He caught 18-14 on day one and followed that up today with another 19 pounds, 11 ounces.

“I haven’t got the big fish figured out, but there’s no telling how many we’ve caught the last two days,” Rose said on stage. “I’m not catching those big Kentucky Lake bass, but I’m having fun.” 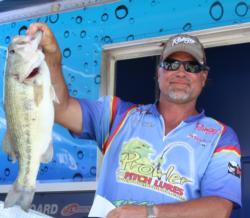 Rounding out the top 10 pros who will fish the final day on Kentucky Lake: 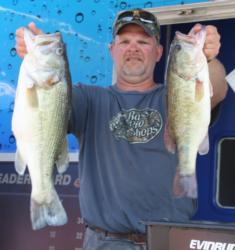 With a day-two catch of 20 pounds, 15 ounces, Steve Ralls of Buncombe, Ill., jumped from 30th to first in the Co-angler Division. He caught 13 pounds, 7 ounces yesterday but followed that up with the tournament’s heaviest co-angler sack today, bringing his total weight to 34 pounds, 6 ounces.

He fished a Strike King 10XD on main channel river ledges today from the back of pro Rick Cotton’s boat.

“In two days I had two really good boaters who took good care of me,” Ralls said.

He hopes for similar fortunes tomorrow, when he will be fishing with leader McGuire.

“If they can get me around fish I can catch them,” he said. 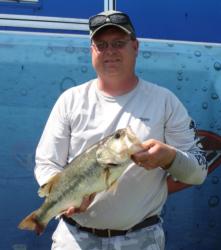 Yesterday’s No. 2 co-angler David Carroll of Manitou, Ky., maintained his second spot on the leaderboard with a 16-pound, 3-ounce limit. He caught 17-1 yesterday for a total of 33 pounds, 4 ounces, which has him just 1 pound, 2 ounces out of the lead.

Behind him in third is Donald Sibley of Strasburg, Ohio, with 32 pounds, 9 ounces of bass over two days. He caught 14-14 yesterday and improved that catch today with 17 pounds, 11 ounces. He caught his bass today with a worm and a jig.

Yesterday’s leader Ben Jackson made the cut in the No. 4 spot with 31-13 over two days. Behind him in fifth is Marvin Maxwell of Tunnel Hill., Ill., with a combined catch of 31-12.

Rounding out the top 10 co-anglers who will compete again tomorrow on Kentucky Lake: