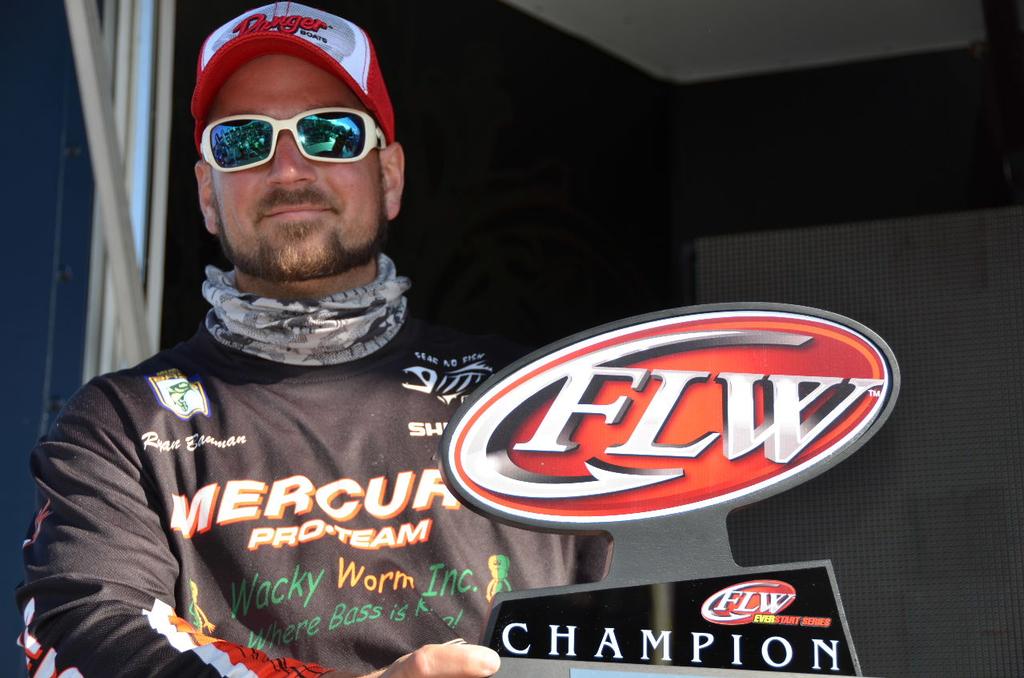 NORTH EAST, Md. – Fishing in the biggest tournament of his career, Ryan Bauman of Fleetwood, Pa., saved his best for last. After qualifying for the finals in third place, Bauman recorded a whopping 17-pound, 6-ounce catch in the finals, blowing away the rest of the competition in the process. In the end, Bauman turned a 2-pound deficit into a 5-pound lead and never looked back, capturing the tournament title on the Chesapeake Bay in dramatic fashion.

“It was a perfect day,” said Bauman, who netted a three-day total catch of 38 pounds, 2 ounces. “It’s definitely the biggest victory of my career. I can’t even explain it.”

In many respects, Bauman’s week defied explanation. On day two, with time winding down, Bauman’s pro partner blew out his engine just a few miles from the marina. Facing the prospect of a massive penalty for coming in late, Bauman and his partner needed to rely on some timely assistance from a fellow competitor. And they got it. Pro Mike Moran happened to be passing by and when he saw what had happened, he graciously carted the two anglers back to the marina.

“I have to give Mike a lot of credit,” said Bauman. “We got back with 12 seconds to spare. I can’t thank him enough.”

Ironically, Bauman drew Moran during the final day of competition – and that partnership almost wound up producing two titles. While Moran came up short, Bauman was able to capitalize on his opportunities. But it wasn’t easy.

But then things turned around … quickly.

“We’re targeting wood, fishing in really shallow water and then the tide left,” he said. “And that really concentrated the fish in our area. From that point on, I was really able to start getting fish in the boat.” 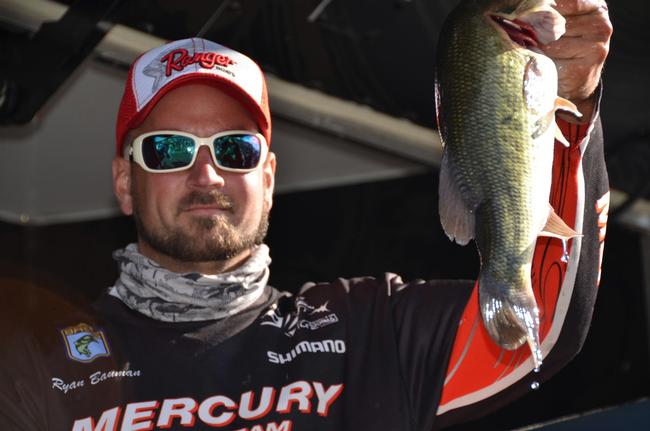 Using a Lucky Craft, square-bill crankbait, Bauman went to work. Ultimately, he managed to haul in the biggest stringer recorded during the entire tournament in the Co-angler Division. Once again, the timing couldn’t have been better for Bauman.

In the end, Bauman walked away with a brand new, fully rigged Ranger Z117 with 90-horsepower engine for his efforts.

Although Marvin Reese of Gwynn Oak, Md., came into the finals as the top qualifier, Reese ultimately had to settle for second place after recording a total, three-day catch of 33 pounds, 6 ounces. 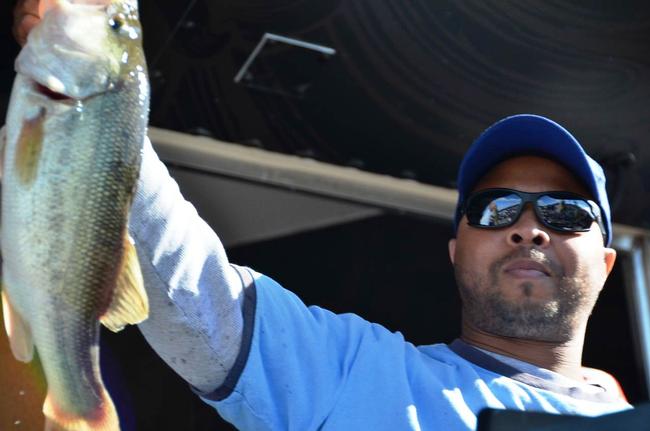 “Today was pretty stressful. I guess that sums it up best,” he said. “I struggled all day today. I only had two fish in the boat until the final two hours. Then I caught two more but I could never get a limit. The last two days I only had four keepers and that hurt me.”

Reese said that he targeted wood, boat docks, rocks and a variety of other hard cover to land the majority of his catch. He said he employed a versatile arsenal consisting of jigs, spinnerbaits and ChatterBaits.

“Frank (Poirier) was a great partner and he put me on fish so I can’t really complain,” said Reese. “I didn’t get to pre-fish at all, I had to do a lot of adjusting each day and I haven’t been to this body of water in three years. Ryan (Bauman) also set the bar pretty high today. Overall, I had a great tournament. And given everything that happened this week, I’m pretty proud of my performance.”

For his efforts, Reese netted nearly $3,400 in winnings. 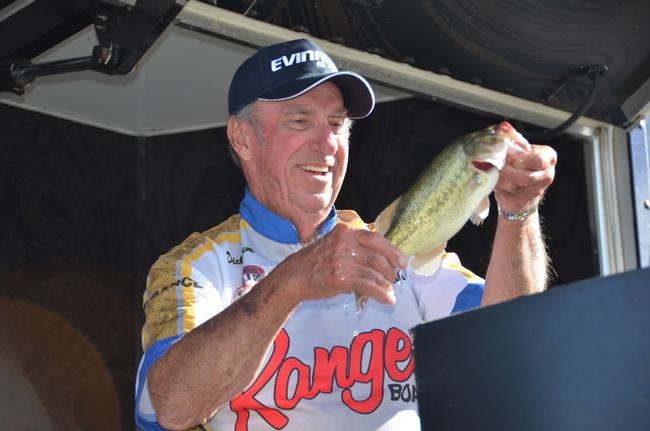 After three tough days of fishing, Dick Gum of Woodbridge, Va., parlayed a 27-pound, 3-ounce stringer into a third-place finish.

“It was a good week,” he said. “Anytime you get in the money on the final day it’s a good tournament.”

Gum said he targeted a combination of grass, wood and rock with spinnerbaits, worms and topwater frogs to land the majority of his catch.

“For the most part, everything went well this week,” he said. “I would have liked to have done a little bit better today but I’m satisfied. I have no complaints.”

In the end, Gum took home more than $2,800 in winnings for his efforts.

Pyles finishes where he left off

“I had a very good week,” said Pyles, who targeted bass with a black-and-blue jig for the majority of the competition. “All week I tried to keep an open mind and it worked out well for me. It’s just been a fantastic experience. I’ve really enjoyed it.”

Lenny Baird of Stafford, Va., made his third top-10 cut of the year, finishing the Chesapeake Bay event in fifth place overall. Baird finished the tournament with over $2,000 in winnings. 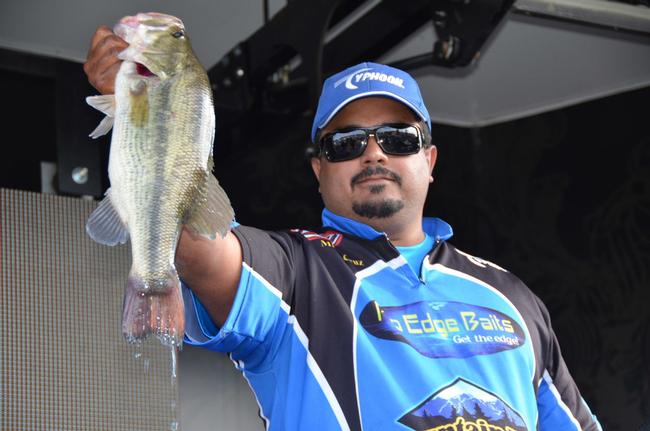 Manuel Cruz was also officially recognized as the 2013 EverStart Northern Division Co-angler of the Year champion. The award brings an automatic invitation to fish in the 2014 Forrest Wood Cup.

“I knew it was going to be close,” said Cruz of his narrow win over co-angler Lenny Baird. “I was a little nervous yesterday when I lost a 3-pounder right at the boat. But once I (qualified) for the finals, I knew I had it wrapped up. So it feels great. That’s what everyone works to accomplish, making it to the Forrest Wood Cup. To know that I’m going to get to fish against some of the best is a wild dream come true. It’s awesome.”