MANNING, S.C., – The vast expanse of bass-holding cover in Santee Cooper is mindboggling. There are literally thousands and thousands of acres of flooded swamp, jammed pack with cypress trees, standing timber, grass, lily pads and anything else a bass might like to get around.

Trying to process how many possible areas big bass can live in at Santee Cooper could overload the brain. But some times in bass fishing, the simpler the better applies.

Just ask Santee Cooper veteran guide Lindwood Thornhill of Pineville, S.C., how simple catching big bass can be on his home lake and the answer might surprise you.

Instead of hearing about secret swamps, particular trees that are better than the surrounding hundreds of trees, hidden pockets and vast flats, Thornhill might just say, “rock.” 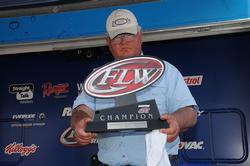 That’s because Thornhill won the Rayovac FLW Series on Santee Cooper of off the lake’s biggest piece of structure – the rip rapped 7-mile Diversion Canal that joins lakes Marion and Moultrie.

In three days Thornhill, reeled in 72 pounds, 4 ounces of bass from the riprap rocks along the Diversion Canal to pocket $40,000.

And while 15 bass that weigh 72 pounds, 4 ounces in three days might sound impressive, it’s really the catches of his co-angler, Marvin Reese of Gwynn Oak, Md., that will make your jaw drop.

Amazingly, Thornhill essentially guided Reese to the most mind-numbing catches ever seen from the back of the boat in the Rayovac Southeast Division. After zeroing on day one, Reese drew Thornhill on day two and proceeded to catch five bass weighing 31 pounds, 13 ounces to move into first place. That paired Reese with Thornhill again today and this time Reese caught just four bass that weighed an astonishing 32 pounds, 10 ounces, allowing him to easily win the Co-angler Division.

You read that correctly, that’s nine bass in two days that weighed 64 pounds, 7 ounces, making each bass an average of 8 pounds.

In all, that means Thornhill and Reese caught a combined total of 136 pounds, 11 ounce of bass off the rocks in the canal.

For Thornhill, a majority of his weight came off one lure, a ¼-ounce football jig with a crawfish trailer, both in green pumpkin. He fished the lure on 15-pound test Trilene Big Game Line.

“I was keying on little current breaks along the rocks,” Thornhill said. “I’d say most of the fish came out of about 10 to 12 feet of water. I’d just cast up there to the rocks and work the jig down into deeper water. The fish that live there are big ones.” 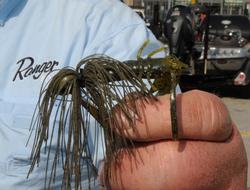 Thornhill has guided on Santee Cooper for the better part of 50 years. Since he is known as a catfish and striper guide, he knows the Diversion Canal and its fickle currents well.

“There is a little period of time after winter when the big bass get up on those rocks and feed heavily just before they spawn,” Thornhill said. “In a week or so, they’ll all be gone and sitting up on beds somewhere.”

While the weigh-in crowd ooed and awed over Reese and his giant catch, it was business as usual for Thornhill, as if it was just another successful guide trip on Santee Cooper – except this time he collected $40,000 for his services. 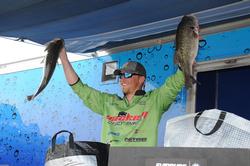 It was a nice ending to a trying week that started with a large hole in Moon’s boat Friday afternoon that caused it to take on water and rendered it useless on the final day.

“I don’t know what happened,” Moon said. “I didn’t hit anything except big waves coming back. And somehow the rough water just sheered the gelcoat right off the bottom of my boat. By the time I got back to weigh-in, we had water up to our ankles.”

Moon was quick to give a shout out to his friend Joseph Whieldon who lent him a boat for the day, which Moon loaded up with over 24 pounds of bass.

Moon found his success this week on a Chatterbait teamed with a Wackem baits paddle tail worm on 20-pound test fluorocarbon line.

Moon felt the color of his Chatterbait and the matching paddletail were a key. He had to improvise by robbing a watermelon seed green skirt from a spinnerbait and putting it on his Chatterbait.

“It made it look more like a bluegill and that made the difference,” Moon said. “I stayed in one small pocket all week and just used that Chatterbait. It’s like they kept funneling in there, so I kept going around it.” 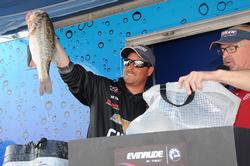 “There was a lot of current running through the upper lake this week,” Thrift said. “And anywhere there was a current break – especially trees in ditches – I fished it.”

Thrift relied on a crankbait and a Shane’s Baits Mini “Blades of Glory” umbrella rig for his catches in the current breaks. 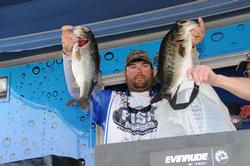 Davis arrived late to practice for the Santee Cooper Rayovac because he fished the top-10 at the Lake Hartwell FLW Tour event on Sunday.

After two practice days without a single bite, day one of the tournament Davis decided to put his trolling motor down at take-off and just maximize his fishing time with his favorite lure – a swim jig.

Eight hours later he returned to the scales with 31 pounds, 1 ounce to take the day-one lead.

Davis thought he might be on the winning pattern, but when waters cooled off significantly on day two, the fish in his area were not as aggressive on the swim jig.

“I was using a 3/8-ounce Camelback swim jig with a Mister Twister Pocket Craw in black and blue all week,” Davis said. “I fished it on 55-pound test Daiwa Samurai braid on a Phenix 7-foot, 7-inch medium-heavy MB-1 rod around any kind of cover I came across – I was not picky.”

Trevor Fitzgerald of Belleview, Fla., rounded out the top five with a three-day total of 51 pounds, 1 ounce worth $9,000.

Fitzgerald spent the week pitching cypress trees with his namesake custom made rods. 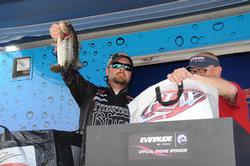 “I was pitching trees and punching little isolated mats with a Gambler Ugly Otter in gold rush color on Sunline braid FX2,” Fitzgerald said. “I had one rigged on a Fitzgerald Rods 7-3 heavy action with 3/8-ounce weight for the trees and another one rigged with a 1-ounce weight on a 7-6 medium-heavy for the little mats.”

Rounding out the top-10 pros in the Rayovac FLW Series event on Santee Cooper after day three: