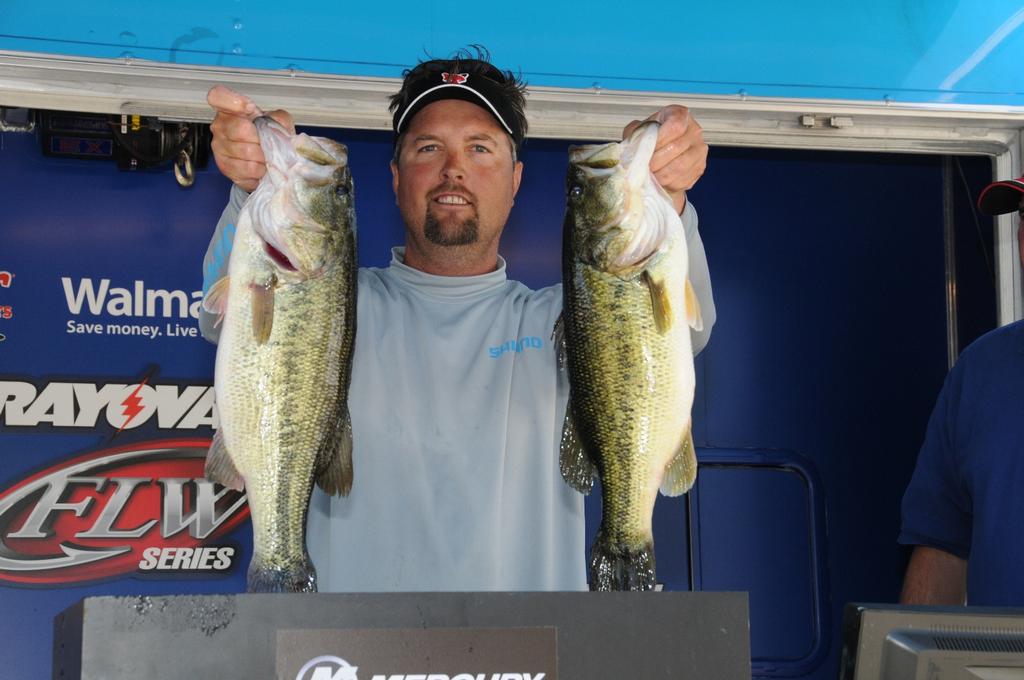 GUNTERSVILLE, Ala. – For the second day in row at the Rayovac FLW Series presented by Mercury, anglers hauled in 20-pound plus bags out of Lake Guntersville like they were growing on trees.

In all, 28 limits topped the 20-pound mark today, 11 less than yesterday, but still, for a lake that has been pummeled all spring long, that’s still stunning.

In addition, the top limits went up slightly today. Where as the biggest limit yesterday was 27 pounds, 7 ounces, there were two bigger than that today, a 29-15 and 28-8.

Patterns now range from bed fishing, to dock fishing, to shad spawns to fishing out deep for post spawners.

A little more wind today seemed to help those who are fishing out while hampering some of those who are counting primarily on sight bass.

One common denominator seems to be few leaders have been able to find a true wad of bass out on the main river where bass will eventually congregate in the coming weeks. Instead, smaller, shallower breaks back in the bays and pockets seem to be holding a majority of the post spawn bass.

Now leading the event is Ron Nelson of Berrien Springs, Mich., who was in second on day one with 26 pounds, 3 ounces but added 23 pounds, 4 ounces today to overtake the top spot with a two-day total of 49 pounds, 7 ounces.

This is Nelson’s first trip to Guntersville and sometimes seeing a lake with a fresh pair of eyes, void of any previous memories, is an advantage, such has been the case with Nelson.

“I know this sounds crazy, but I don’t really feel like I’ve figured the fish out here,” he said. “I came here really wanting to ledge fish and that’s what I worked on all during practice. But I could never get anything going, so I went to the bank looking and I found a couple of areas that have some decent spawners in them.”

While Nelson has sight-fished a couple of bigger bass over the last two days, his main strategy has been to locate beds, mark them well and then ease back into the bedding areas first thing in the morning when it’s dark and make “blind” casts to specific areas where he has seen fish on beds. That tactic has worked for the majority of his weight.

Other than that, he has also mixed in some dock fishing and laydowns that have produced the rest of his fish.

“Each day I keep trying that offshore stuff I found just to see if they are going to show up,” he added. “When I don’t catch anything out, I always end up going back to the bank looking for new bass and fishing docks and wood.” 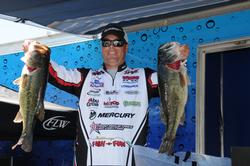 Brad Knight of Wartburg, Tenn., brought in the biggest limit of the tournament so far – five bass that left him one ounce shy of 30 pounds – to rocket into second place with a two-day total of 48 pounds, 3 ounces.

Knight is throwing a big swimbait. He said the biggest difference today for him was wind, which seemed to help the fish commit to the bait.

“Yesterday I watched so many fish follow my bait back to the boat, but they would never eat it,” Knight said. “Today, they were crushing it.”

As to how big the swimbait actually is, Knight would only say, “it’s big.”

On the day, Knight said he caught about a dozen fish off eight different places.

“The fish are still back along creek channels and shallower breaks in the bays in that 4- to 6-foot range, moving back out towards the river,” he added. “A lot of my places are single, precise cast-type spots that will only hold one or two fish at a time.”

After weighing in two 24-pound limits, David Hendrick of Cherryville, Ala., sits in third place with a two-day total of 48 pounds, 3 ounces. 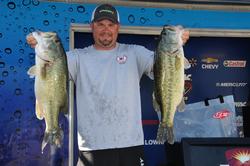 Hendrick has been primarily sight-fishing early to get a limit, but has also found one offshore spot that is wide open in the afternoons that helps him cull up a bit.

“Most of the ones I weighed in today I looked at,” Hendrick said. “But I do have one offshore spot that really loaded up today. I checked it yesterday and it was dead. But today, it was on fire. I probably caught 20 fish off it and a couple of them helped me. It’s the first place like it I’ve found all week where they are actually ganged up.” 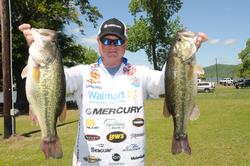 The fact that Rose sits just a pound and a half off the lead on a TVA impoundment that is transitioning from spring to early summer does not bode well for those ahead of him.

Rose is a deadly closer in the Tennessee Valley when post spawn bass are migrating to their offshore feeding tables.

“It’s not quite there yet,” Rose said of his wheelhouse. “But it’s close. They’re not grouped up strong and they’re not really just choking baits yet, either. I can see fish down there that are not responsive yet because they’re still in that post spawn recovery period. I can only catch a fish here and a fish there – single fish type spots in about 15 feet. But I did find a shallower spot today in that 6-foot range where they were feeding pretty well so I’m looking forward to tomorrow.”

Robert Behrle of Hoover, Ala., rounds out the top five with a two-day total of 47 pounds, 9 ounces.

For two days Behrle has primarily made his living off of one grass-lined hump in 6 to 12 feet of water. 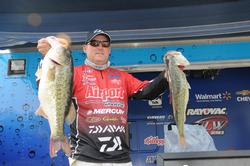 Today his “sweet spot” produced again, but not for very long.

“I had one good flurry there early and then it died,” Behrle said. “I basically wasted four or five hours there staying with it this afternoon hoping it would fire again, but it didn’t.”

Behrle’s main weapons in the grass are a Carolina rig and a crankbait.

“It seems the brighter the sun is, the better they pull up into the grass clumps on this place,” he added. “But when it’s cloudy and windy like it was some of the day today, they just don’t tuck right up in that stuff and they get a lot harder to catch.”

Scott Wiley of Bay Minette, Ala., caught the big bass in the Pro Division on day two weighing 7 pounds, 7 ounces.

Rounding out the top-10 pros after day two:

Malcolm Acree of Clearwater, Fla., leads the Co-angler Division of the Rayovac FLW Series on Lake Guntersville with a two-day total of 38 pounds, 14 ounces.

Bryan New of Belmont, N.C., is in second place among the co-anglers with a two-day total of 36 pounds, 9 ounces.

Randy Gardner of Wetumpka, Ala., is in third place with a two-day total of 36 pounds, 2 ounces.

Steve Keller of Bethel, Ohio, caught the big bass in the Co-angler Division on day two weighing 9 pounds, 1 ounce. That bass helped propel him to fourth place with a two-day total of 35 pounds, 12 ounces.

Timothy Watkins of Trussville, Ala., rounds out the top five co-anglers with a two-day total of 33 pounds, 4 ounces.

Rounding out the top-10 co-anglers after day two: