Specifically, the wind went awry: blowing out of the south to some 20 mph, taking a lot of anglers “best laid plans” out of the picture.

The leaderboard was not exactly filled with the high teen limits many thought were possible after the practice round. Several top Rayburn sticks admitted to not having a bite in some of the areas they thought would produce. Others found southerly-wind driven swells washing out their best areas.

Once the wind and some thunderstorms changed the day, Andrew Upshaw of Tulsa, Okla., threw his playbook out the window and just went fishing “to survive the day.”

As it turned out, Upshaw’s survival fishing transpired into a limit of bass one ounce shy of 20 pounds, which puts him atop the leaderboard after day one.

“I really just went practicing again today,” Upshaw said. “The wind really forced me out of some areas I wanted to fish and into others that I had no plans on fishing. I ran away from the wind more so than anything.”

Upshaw said he stayed shallow much of the day fishing grass-related areas.

“It just turned into a survival day for me,” he said. “And some of the better ones I caught were really just bonus fish. If it calms down or switches up any maybe I can effectively fish the places I really want to fish tomorrow. But once I started survival fishing today, I wasn’t going to argue with the way it was turning out.”

“Today was not the best fishing day for this lake and not just because of the wind,” he added. “They really just didn’t bite today. I’m not sure why, maybe a pressure change or something. But that’s the way this lake fishes in the fall. You have a really good day and then an off day or two in terms of the bite. And who knows, maybe tomorrow the bite will be back on and we might suddenly see a lot better weights across the field.” 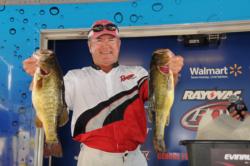 Charlie King of Coushatta, La., holds down the second place spot after day one with five bass for 18 pounds, 7 ounces.

King’s original plan for the day was to fish deep, but when the day dawned dark and overcast he suddenly changed up.

“I originally had my eye on a few deep places,” King said. “But it was a hot muggy morning, the wind was blowing, kind of misting rain a little bit and I thought, it sure looks like a spinnerbait day, so I just pulled over into a shallow grass area and we started catching them. I went through three, maybe four limits of fish pretty quick and then the wind really started blowing up some big rollers, so I just stayed with the shallow program all day. I didn’t cull up much in the afternoon, though, maybe one more time and that was it.”

“I’m still looking to try some of my deep places tomorrow if the wind will slack off some,” he added. “One thing is for sure, I know I didn’t get to touch those places today so maybe they will be fresh tomorrow.” 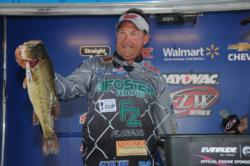 Local Rayburn stick Stephen Johnston of Hemphill, Texas, settled into third place after day one with a limit of bass weighing 17 pounds, 1 ounce.

“It was a lot slower than what I was expecting – and what a lot of these guys were expecting today,” Johnston said. “This is really the biggest front we have had all year blowing in right now and once those big thunderstorms and stuff rolled through it really shut the bite down big time.”

Johnston said he caught a majority of his fish on a V&M Lightning Blade and a spinnerbait, staying shallow around grass and timber.

“They were not really eating the bait like they normally do,” he continued. “They were pushing it and shoving it around and not committing to eat it. And that’s how you know when the bite is off on this lake. When they start charging the bait with no intent to eat, something has changed and has them messed up.”

Johnston also noted that the wind really pinned him down in one area, hampering his mobility.

“At 11 o’ clock I only had like 11 pounds,” he said. “And I wanted to move somewhere else in a bad way. But I resisted the urge to run out in that big water, eating up all that time and I just stayed put, grinded it out in the grass, got a couple of more bigger bites and now I’m glad I stayed.” 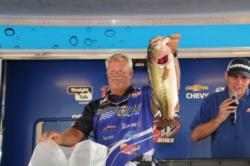 Albert Collins of Nacogdoches, Texas, is in fourth place with 16 pounds, 11 ounces, thanks in large part to catching the Pro Division’s biggest bass of the day weighing it at 6-pounds, 15-ounces.

“I had two big fish and three small keepers,” Collins said. “Believe me, I thought I was going to catch more of those big ones. I really thought we would see some 20-pound plus limits today. Obviously something happened because the big ones just did not bite. I hit eight or ten places today and caught mostly small fish every where I went.” 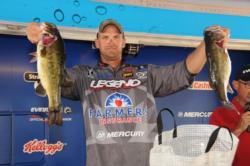 Todd Castledine of Nacogdoches, Texas, rounds out the top five with 16 pounds even, which brings him one step closer to claiming the Texas Division points title.

“I caught two nice ones right off the bat and thought it was going to be a pretty good day and then never had another bite for 3-1/2 hours,” he said. “It was like something just shut off. Every single place I thought I could catch a big one, I never had a bite – I mean nothing. I really don’t know what to make of that. Something really strange happened to the good ones today.” 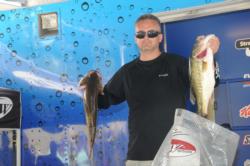 Corbett Ross of Port Neches, Texas, brought in 18 pounds, 13 ounces to take the lead in the Co-angler Division on day one.

Ross said his catch was the result of a little homework.

“I live here on the lake and I spent a few days practicing so I had a pretty good idea of how I was going to fish,” Ross said. “I got a good pattern going and it’s seems to be working. I just hope it holds another day.”

Robert Davis of Lufkin, Texas, reeled in 18 pounds, 11 ounces to start the event in second place.

Joey Cifuentes of Clinton, Ark., is in third place with 18 pounds, 5 ounces.

Tim Fox of Meridian, Miss., caught the big bass in the Co-angler Division weighing 8 pounds even to give him a day one total of 16 pounds, 5 ounces.

Keith Honeycutt of Temple, Texas, rounds out the top five with 11 pounds, 10 ounces.