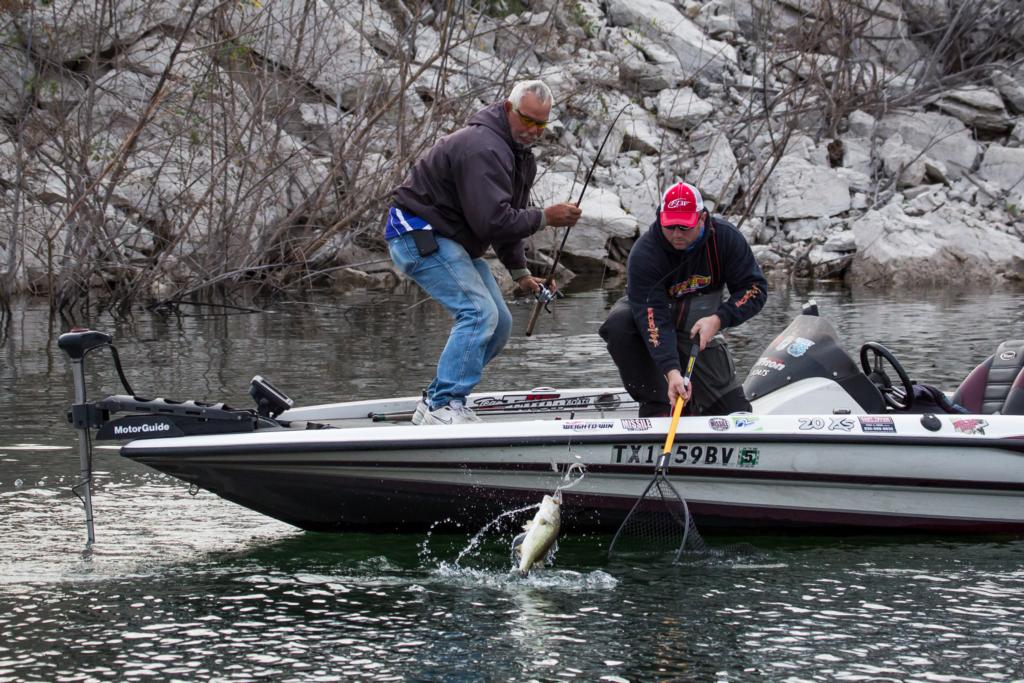 A common theme was evident in the top patterns from Lake Amistad last week at the opener of the Rayovac FLW Series Texas Division. Almost every angler in the top 10 was catching fish that were transitioning from wintertime haunts to prespawn staging areas. A few even caught fish that were “moving up” to where they’ll eventually spawn.

What follows are the patterns of the sixth- through 10th-place anglers. 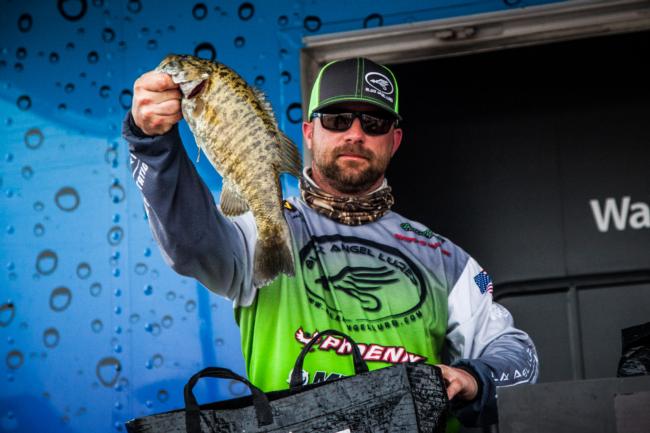 Wade Hudgens dialed in a pretty straightforward prespawn pattern on Amistad. Unfortunately, he was only able to replicate the pattern in a couple of places, and when his fish failed to replenish and commercial fishing pressure wore out his spot, his weights began to dip. Hudgens weighed in 11-10, 17-12 and 7-15, respectively.

“I started out fishing channel swings, where they met a shelf or deep water,” he says. “I was also targeting flat spawning-type points.”

The channel-swing spots ranged from 20 to 50 feet deep and featured white “broken” rock, which Hudgens thinks was a key feature. His points were in the 10- to 25-foot range with nearby grass beds that provided cover for the fish. 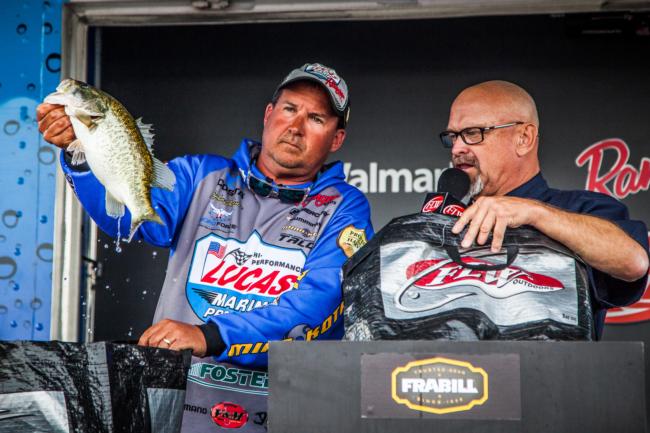 Stephen Johnston struggled on day one, when he only caught four keepers for 7 pounds, 13 ounces. He battled back on Friday and Saturday with back-to-back limits of more than 14 pounds thanks to calmer conditions, sunshine and warming water that pushed more fish into his prespawn staging drain.

“It seemed like the water really warmed up where I started [in the drain],” Johnston said at Saturday’s weigh-in. “It was 55 degrees, but the first day it was only 50. I saw some fish chasing today.

“I was finally able to move up shallow enough to put my Minn Kota Talons down, and I slow-fished in a creek bend in 6 to 10 feet. Overnight the fish went from 14 feet and moved shallow. As the water warmed up, they kept moving. I didn’t know those fish were that shallow until I saw some come up schooling.”

Johnston’s best drain was about 75 yards long. He also had a backup staging point outside of a main-lake pocket, but in both areas the key was a slow dragging presentation with a Texas-rigged V&M Chopstick worm in the watermelon seed color. He also caught a few keepers on a Strike King 1.0 square-bill crankbait around flooded huisache bushes. 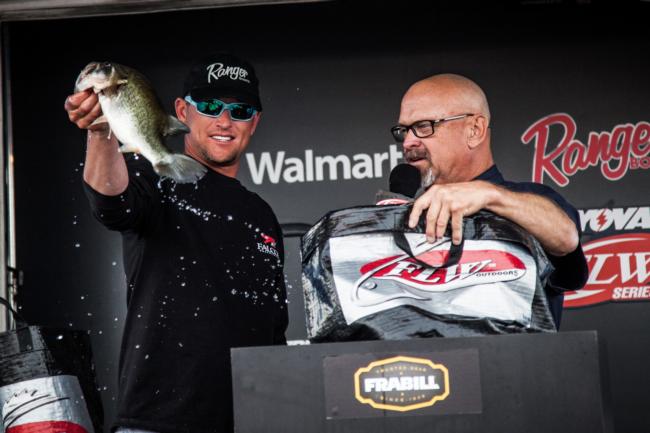 Joe Don Setina fished his way into the top 10 by avoiding the crowds and covering a lot of water.

“I was hiding where no one else was fishing, back in creeks trying to catch staging fish,” he says. “I was targeting drains and points. Yesterday [Friday] I pulled up and saw some sunning on points with big rocks, probably 8 to 12 feet deep.”

Setina lobbed an umbrella rig all week and landed all but two of his keepers with the rig. He caught one on a Strike King 8XD crankbait and another on a 7-inch Yamamoto Senko. 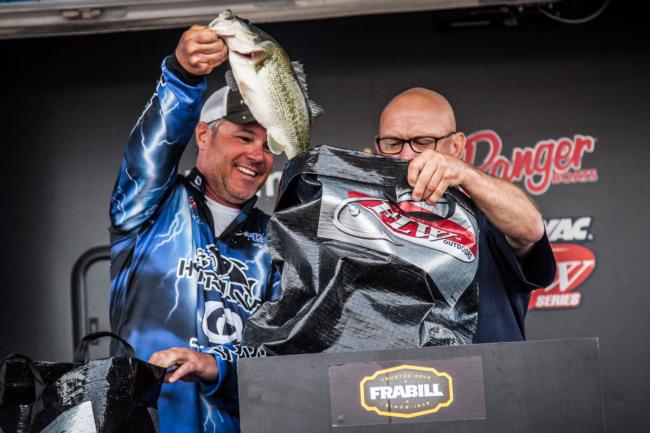 Motor troubles plagued Gene Eisenmann early on in this tournament and limited where he could travel on the lake. Nevertheless, Eisenmann made the most of his opportunity with a top-10 finish.

He used a slow, bottom-fishing technique known as scrubbing, which involves very slowly retrieving a 3-inch Keitech Fat Swing Impact swimbait on a 1/16-ounce jighead and 8-pound-test line along bottom in deep water.

“I only had five bites in practice,” Eisenmann says. “I just went old school and fished in 30 feet of water. Bites were few and far between, but when I got one it was a good one.

“There were a lot of fish there, but I couldn’t catch them,” he adds. “It drove me nuts to see them on the graph. I also drop-shotted my rear end off, but that didn’t work either.” 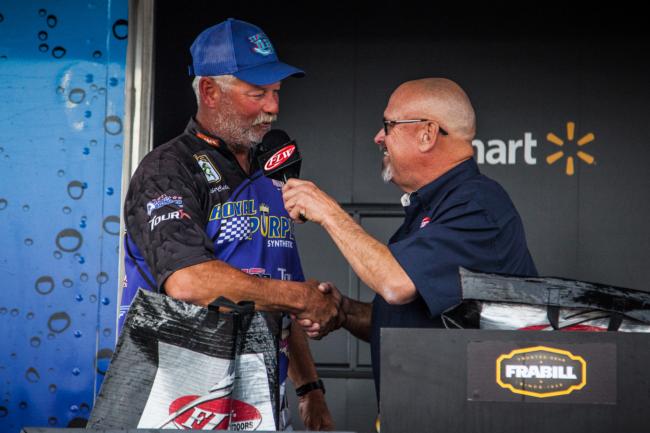 Albert Collins swung for the fences on Saturday. Unfortunately, he missed. Collins failed to catch a keeper on the final day.

Earlier in the week he caught his fish up the Devils arm of the lake on chunk rock and points adjacent to flat rock shelves with a jerkbait and umbrella rig. By the end of the tournament, his fish were actually set up on the shelves.

For his last-day gamble, Collins ran down to the main lake and targeted deep ridges and ledges directly off the main river channel.

“It didn’t work out,” he says. “We decided to leave those deep ridges and go back to the jerkbait and umbrella rig fish [in the afternoon]. I couldn’t get bit on an umbrella rig, and the fish just wouldn’t eat the jerkbait – they’d just swipe at it.

“To tell you the truth, I think these fish were spawning on that shelf 15 feet deep,” he adds.