Shura in Front on the Cal Delta 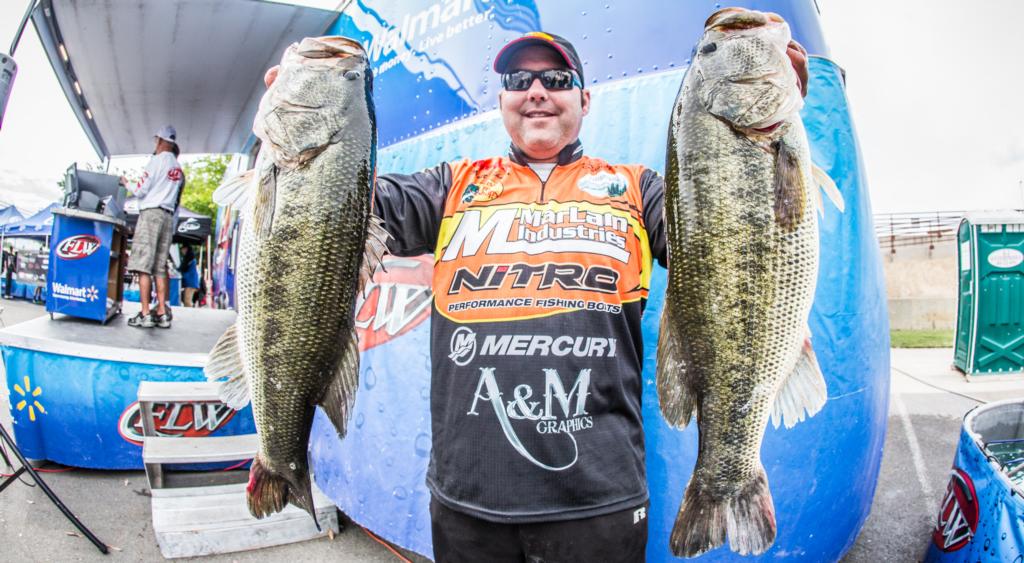 Day one of the Rayovac FLW Series Western Division event presented by Ranger Boats at the California Delta didn’t exactly turn out as most pros expected. There were no 28- to 30-pound limits, like were predicted. And even a couple in the current top five were surprised that their mid-20-pound weights held up like they did.

Current second-place pro Ken Mah summed up the opinion shared by most pros this week when he said that the Cal Delta is just “a little funky” right now.

The one pro who figured it out best today is Matt Shura, who weighed in 26 pounds, 6 ounces. Thirteen pros weighed in at least 20 pounds.

Shura, of Gilbert, Ariz., leads a top 12 (three of those pros are tied in 10th place) that includes nine Californians. The locals definitely seem to have an advantage right now, as groups of big spawning bass are moving into small areas to spawn, and not everyone knows where those spots are located.

For out-of-towner Shura, however, his success in practice and today has been all about becoming a student of the Delta.

“Last week in pre-fish I had a real consistent bite, where I was getting two or three good ones [each day],” Shura says. “The last few days it just quit. I couldn’t figure out what I was doing wrong. I started really paying attention to the tides and figuring out what these fish do at different tides because I’ve been here three times [for major tournaments] and have been killed all three times.”

During his “studies,” Shura decided to not bother with learning how to “run the tide,” which is to follow a specific tidal level as it progresses across the fishery, and instead dedicated himself to figuring out how to fish basically one area at every tidal stage. He chatted about his plan with Western Division big-shot Roy Hawk in the campground where they’re staying together, and picked the brain of anyone who could offer him some tips on how to understand the tidal fluctuations.

“One thing Roy said was that at the Delta, it could happen at any minute,” Shura adds. “He was right.”

Shura is using a variety of slow and fast baits – crankbaits, Texas rigs, drop-shots and ChatterBaits among them – but he has a main pattern that he’s not revealing just yet.

As for what exactly went so right today, Shura doesn’t really know just yet, except that his hot pre-fish pattern turned back on and he made a couple of smart decisions today that set him up with a prime chance to make the top-10 cut to fish on Saturday.

“Today, I made a decision first thing in the morning to turn, and I went to a spot and stuck a 6-pounder right away,” he says. “I have an area with big fish. If they don’t bite tomorrow, I’ll have to struggle with the decision of whether to stay and grind it out or to go. I fished a 150-yard stretch where they were up eating. That’s where I culled everything but the 6-pounder.”

The flurry on Shura’s prime stretch happened very quickly, proving that what Hawk told him in the campground – that it can happen in an instant – is perfectly true. Unfortunately, Shura knows that this fickle system that’s always so full of change can also humble a pro just as fast as it can make him a hero.

“That’s the Delta,” he says 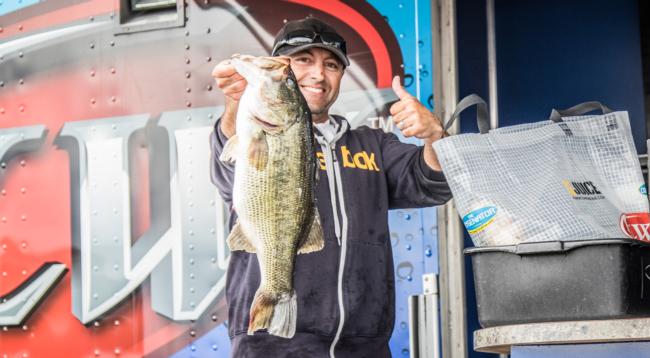 Catching 26 pounds on the California Delta is good enough to put you into contention in any professional tournament here. Catching that kind of weight as a co-angler makes you the odds-on favorite to win.

Jack Farage of Discovery Bay, Calif., finds himself in just such a position today after weighing in a 26-pound five-bass limit to take the early co-angler lead. Farage seemed pretty confident in what he was doing today and admitted to losing a couple of big fish – one that he estimates at close to 10 pounds. His lead could have been bigger if those fish had made it to the boat, but as it stands he’s up by almost 7 pounds over two-time Co-angler of the Year Todd Kline.

Farage pieced together his bag throughout the day and anchored it with an 8-pound, 6-ounce kicker.

“It was a crazy day,” he says. “I brought everything along to fish as a co-angler because you never know what you’re going to do each day. I ended up fishing on riprap and threw a craw-colored crankbait. I got one good one on it early, then switched to a wacky-rigged Senko and caught another good one. Then I went back to the crank and caught that big one [the 8-6].”

Farage made very short casts with the crankbait, since he was positioned so close up to the riprap. He also cast straight out the back of the boat and fished the bait with a very slow retrieve, keying on areas where the pro’s trolling motor hadn’t stirred up silt and muck on the bottom.

Both instances of Farage losing fish happened early in the morning. He says he’s proud of the way he handled the losses.

“It was like a relief to get that big one in the boat,” he says. “I’ve had heartbreak before in tournaments. I’ve taken a couple of seconds. It can go bad really fast, like when I lost those fish in the beginning, but I stayed calm. That could’ve been it for me, but it wasn’t.”