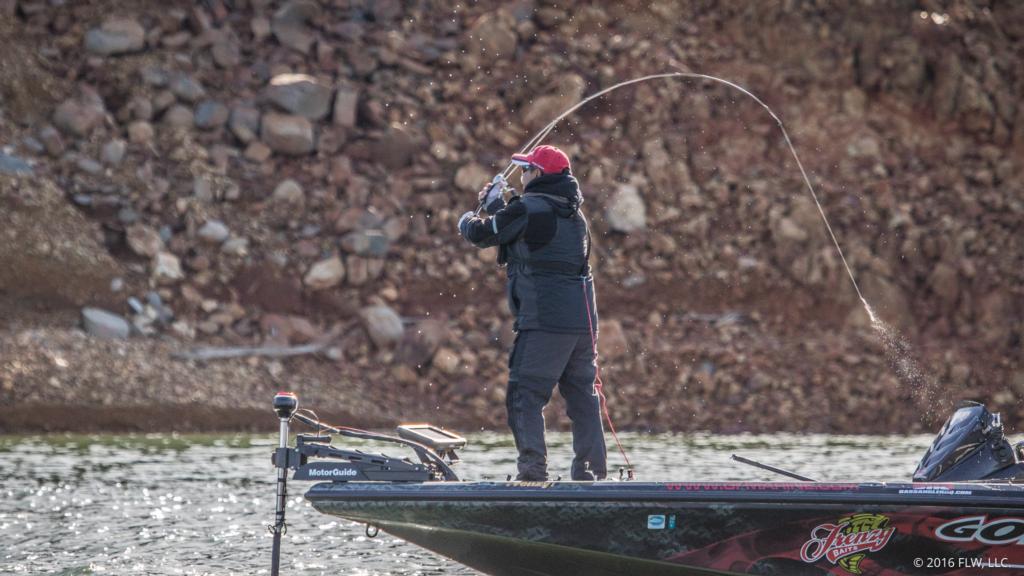 Though Greg Gutierrez took a significant lead into the final day of the Costa FLW Series event presented by Minn Kota on Shasta Lake, the rest of the top 10 pros weren’t out of it and were on ’em all week. While the Western Division opener was plagued by bad and changing weather, every member of the top 10 managed a limit each day, and all but Roy Hawk averaged more than 10 pounds per day for the event.

Here are the details on their patterns, as revealed after the final weigh-in Saturday. 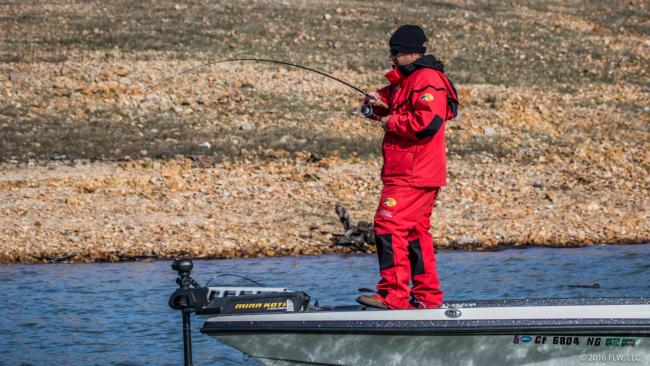 2. Dobyns doubles up with reaction and finesse

Hailing from Marysville, Calif., Richard Dobyns chalked up 35 pounds, 9 ounces over three days and displayed impressive versatility along the way.

Dobyns began the tournament catching fish on an even mix of reaction baits (a spinnerbait and jerkbait) and a Yamamoto Senko, but had to go solely to the wacky-rigged Senko on the stormy day two.

“Day three was an even mix again,” relays Dobyns. “The weather allowed me to do what I wanted to and run around, and I weighed about 50/50 again. I just covered a lot of water and circled about seven or eight spots all day.”

For Dobyns, the top producers were the lower section of the McCloud and Squaw arms as well as the main lake, and he primarily targeted flatter points and flats with chunk rock and gravel on them. 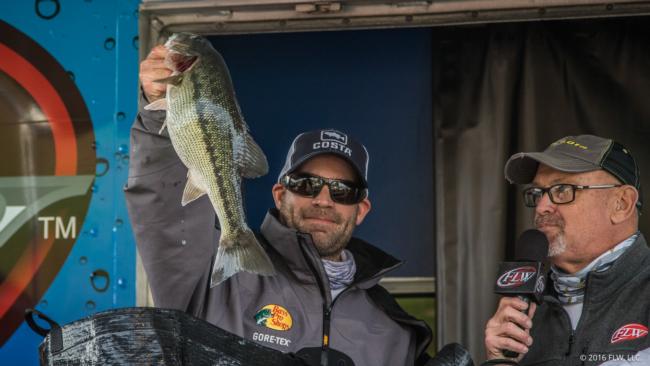 3. Phillips jumps up on final day

Moving from 10th to third in a single day is an impressive feat, and Ken Phillips of Concord, Calif., managed it with a 12-pound, 1-ounce final-day bag that boosted his total to 33-15 for the week.

“I was fishing inside channel bends and the points of the bends, and my big ones came on the points,” says Phillips. “Some of them were better yesterday [Friday], and some were better the day before. When they were biting better on a certain area I would stay there longer and go over it a few times.”

Phillips mined his bends and points with a Keitech swimbait and used anywhere from a 1/4- to 3/8-ounce jighead to track the fish as they moved deeper and shallower throughout the event.

“The [Cal] Delta is my home, but I’ve made a top 10 here before and I love this lake,” elaborates Phillips. “I was sick, and my wife and I just had a baby girl two weeks ago, so I could only practice one day and had to rely on fish I found before.” 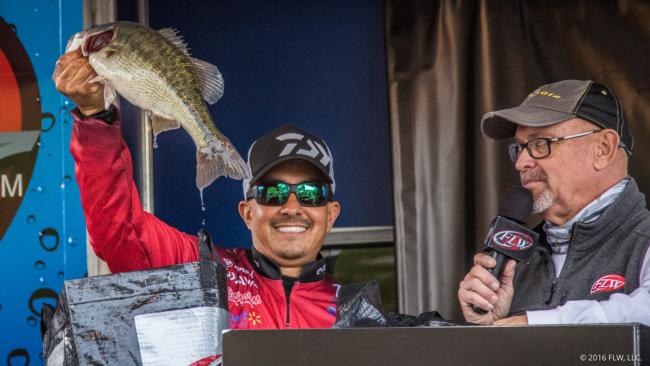 Joe Uribe Jr. is on a roll. Of that there is no doubt. The Surprise, Ariz., pro took a thorough approach that allowed him to move up the standings each day and total 33 pounds, 13 ounces.

“I was fishing the mouth of the Pit River arm and a few of the main points that divide Jones Valley and the Pit,” says Uribe. “They were kind of transition areas where those fish would move back in the cuts, and today I started moving back into those arms as it warmed up.”

Uribe says that he would often make multiple presentations to an area where he caught a fish in practice, and that while he was not targeting schools of bass, his fish kept replenishing.

Jones Valley is an area known for a relative abundance of largemouths, and Uribe caught some dandies in practice, but he was unable to catch any during the tournament. 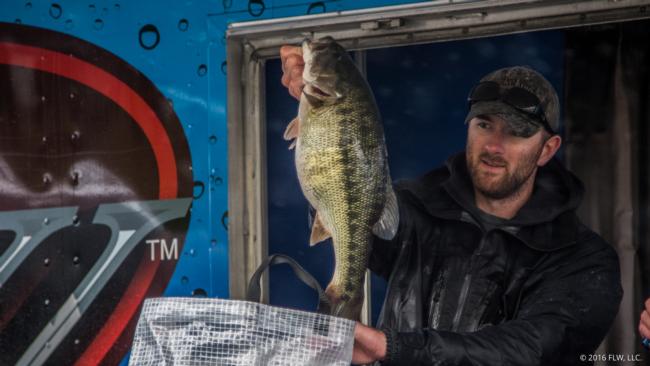 Fresh off a top 10 in the 2015 Western Division finale on Clear Lake, Bryant Smith of Castro Valley, Calif., kept things rolling with another top 10 at Shasta. Smith totaled 32 pounds, 15 ounces, and a big part of that was the behemoth 7-2 spotted bass he weighed on day one.

“I targeted points that were a little bit longer, anything that was a little flatter,” explains Smith, who was running point-to-point at a frenetic pace on day one. “I was fishing in zero to 25 feet, but I didn’t really have a depth range. I just fished from the bank all the way out.”

The first day, Smith caught his big one on a jerkbait, but a Senko did a big chunk of his damage as well. Though he primarily fished in the Sacramento River arm, Smith says the strong wind forced him into secondary areas on day two. 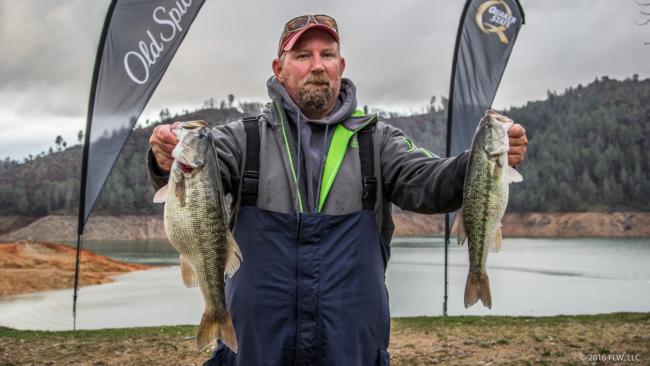 Jeff Michels was the second local in the top 10, and though the Lakehead, Calif., pro could never apply the big swimbait techniques he is know for, he still weighed a respectable 32 pounds, 14 ounces over the course of the event.

On days one and two, Michels made long runs up the Sacramento River arm that didn’t pay off. On day three, he eschewed that and focused his time on the Squaw and McCloud arms and the main body of the reservoir. He targeted a few small creek arms with a crankbait and got most of his kicker bites on flats and flat points with a weighted and un-weighted wacky rig.

“I wish I would have hooked the fish that bit today [Saturday],” says Michels of his disappointing final round. “I set the hook on three fish that didn’t move at all, and they just all came off.” 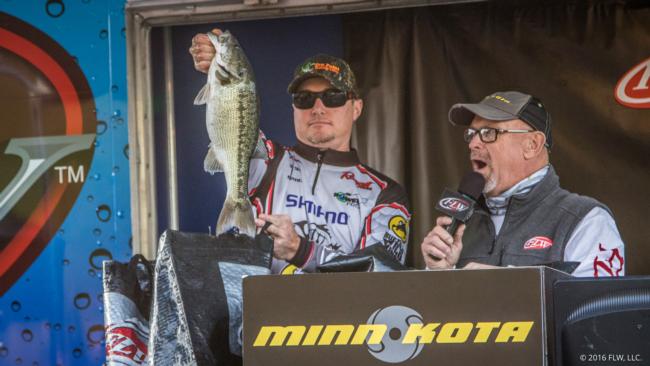 7. Howe goes slow with a swimbait

Miles Howe was in second by just an ounce after day one, but the San Juan Capistrano, Calif., pro couldn’t quite follow it up and finished seventh with 32 pounds, 9 ounces.

“The day before the tournament I knew we were going to have some weather, and I picked up a swimbait and got one bite that I knew was a good bite,” states Howe. “I started day one right where I got that bite and ended up catching a 4-pounder within the first few casts. Then I never put it down the rest of the day.”

Though Howe resorted to some finesse and junk-fished around the same areas later in the week, he was dialed in on day one.

“Super slow was the key – no jerk, no pop, just a slow, slow wind,” Howe explains. “I was looking for narrow, skinny points and large, expansive flats, and if I could find a spot that had both it was money. Some of those places had bait around the edges, and I think the fish were just moving up on them.” 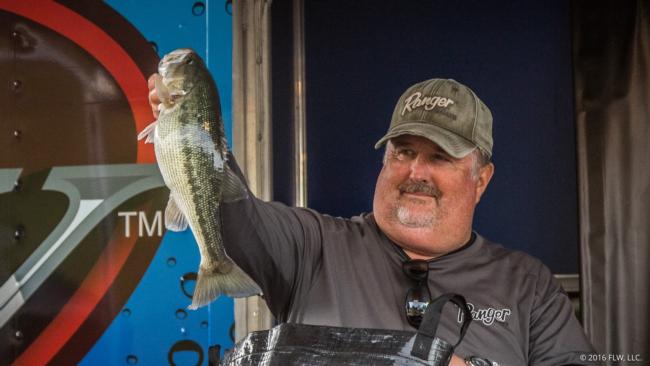 Though Rick Grover (father of 2014 Western Division AOY Kyle Grover) of Trabuco Canyon has been in and around fishing for as long as anyone, this was his first FLW event fished as a boater. Coming off a co-angler win last fall at Clear Lake, Grover kept it rolling with 32 pounds, 5 ounces for eighth place at Shasta.

Grover relied primarily on an umbrella rig but also used a drop-shot on points to bolster his limit on the final day.

“I was throwing it [the umbrella rig] on any kind of inside channel bend, and any kind of lumber on them made it better,” says Grover, who was part of the Pit River crew. “It was fast and furious this morning [Saturday]. I probably caught 20 on it in an hour and a half.

“The quality on the lake overall is better, but I think the kicker fish are up the river. For me that was for sure my best shot at a kicker,” says Grover of his chosen grounds. “You could get in a little 50-yard stretch and catch them almost one after another. If you were around them they were biting in the river.” 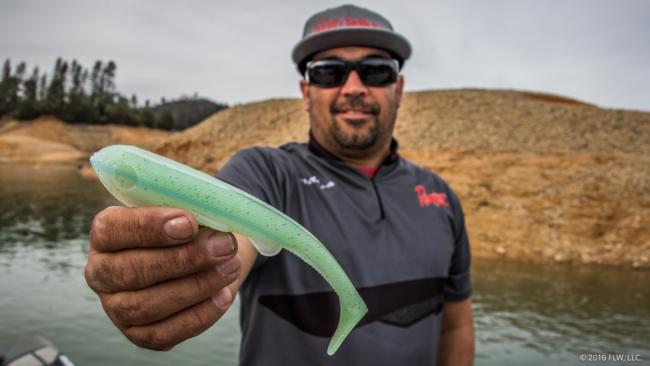 9. Cardoza relies on a swimbait

Tommy Cardoza, who hails from Redway, Calif., boxed up 30 pounds, 13 ounces over the course of the event and did it almost solely with big swimbaits.

Besides one magic hump, Cardoza says he mostly caught his fish off points by swimming his bait about 8 feet down and nearly ticking the bottom on many casts.

“I caught a lot of my fish off one little hump that stuck up out of the water and was like 30 feet around,” says Cardoza. “I even caught a trout there, a giant brown that was like 7 pounds on day one. I was picking on that spot the whole tournament, but I went back there three times today [the final day] and never got touched.

“Today I caught only about six fish, but the first day I caught 15. This post-frontal weather today killed that bite. They weren’t chasing anything.” 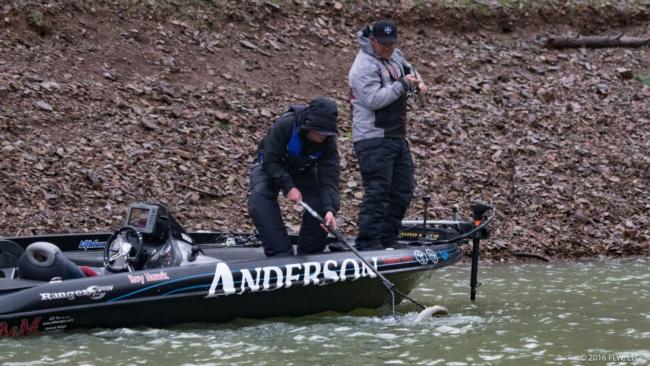 Hawk mixed in some finesse stuff on the final day, but his primary pattern was paralleling the bank in about 8 feet of water with a crankbait.

“I don’t know the lake that well, but the general area about three-quarters of the way up the Pit had bigger ones,” says Hawk. “I targeted the whole thing, but in hindsight, the key was steeper banks with chunk rock.”

Though Hawk started hot with 13-11 the first day, even early on he knew his pattern was dying, and it simply couldn’t sustain him well enough through all three days of the event to chase down the leader.