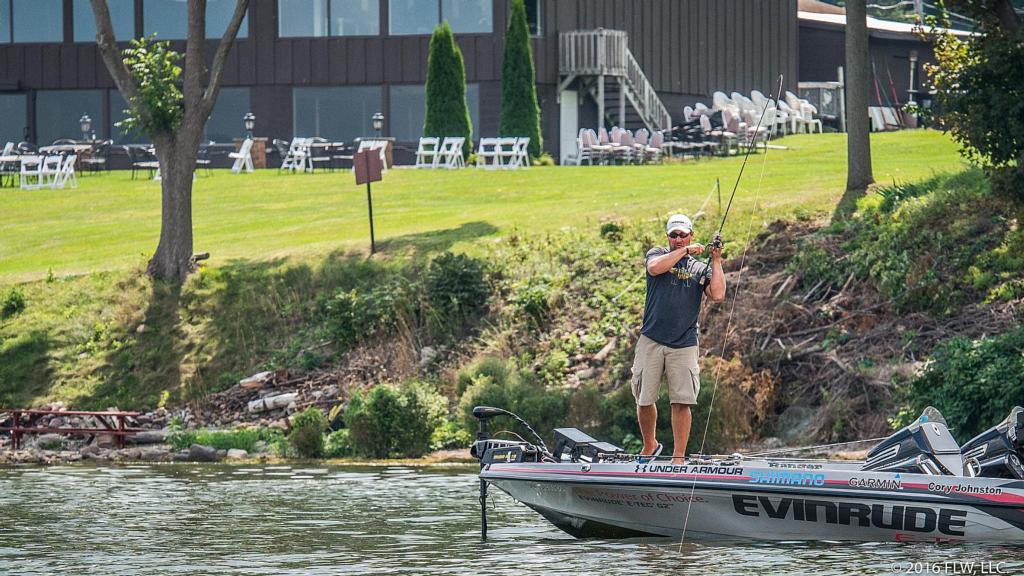 The first day of competition in the Costa FLW Series presented by Ranger Boats on Oneida showed just how much of a competition it’s going to be. In total, 21 different pros brought more than 15 pounds to the scale, and the top five pros are separated by only 5 ounces. Though Michael Hall has jumped out to the early lead, he’s got plenty of sticks hot on his heels. 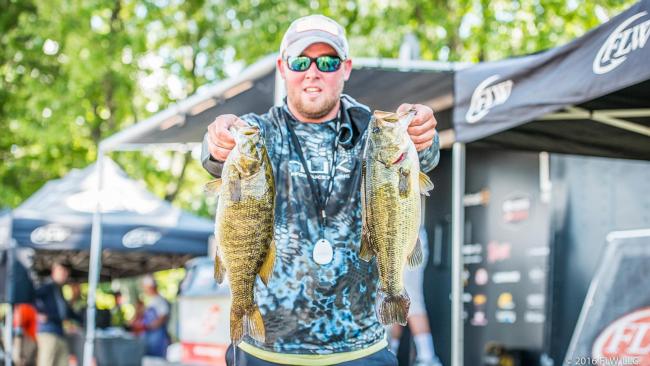 Weighing 17 pounds, 6 ounces to start things off, Zachary Cappon lives just about an hour from Oneida and is no stranger to the lake, but even he would probably not have predicted how his day went.

After bouncing around a handful of main lake shoals in the morning and catching part of a limit, Cappon made a move that paid off in spades. After moving, he bucked the trend of the morning bite and caught all of his weight after noon on one spot.

“There are so many fish in there,” says Cappon of his prime spot. “It is just loaded with fish, but it’s a grind. You might go in there and get five in five seconds or you might zero. You could pull in there and catch all largemouths or all smallmouths.”

Focusing mostly on water between 5- and 10-feet deep, Cappon admits that he did catch a few in water as shallow as 1-foot deep. Instead of looking for one specific thing, he’s moving back and forth through an area about 50 yards long and “just grinding.”

Catching some on a drop-shot and some on a lipless crankbait, Cappon also weighed in a mix of smallmouths and largemouths. Despite catching all his weight from one area, he’s not totally committed yet, and says that he plans to at least start the day chasing smallies on the shoals again. 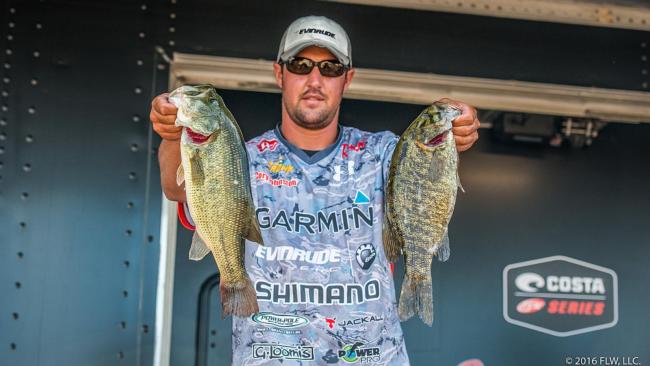 Tied with Cappon for second, Cory Johnston is leading the Angler of the Year race in the Northern Division and appears to be hunting a win as well.

“It started off kinda slow,” says Johnston. “I caught one 3-pounder off the bat, and then ran around a bit and caught one here and one there.”

In the afternoon, Johnston says he hit a spot with some big ones on it and boated a 3-pounder. He then revisited it later for another quality fish.

“I did a bit of running around, but it’s all high-percentage stuff. Chris (his brother) is running the same sort of thing and he should have had a big bag today, so we’re definitely doing the right thing.”

Fishing quite shallow for the most part, Johnston says that he and his brother are the only ones fishing exactly one way, so even though his areas aren’t lonesome, he hasn’t had to fight pressure too much. 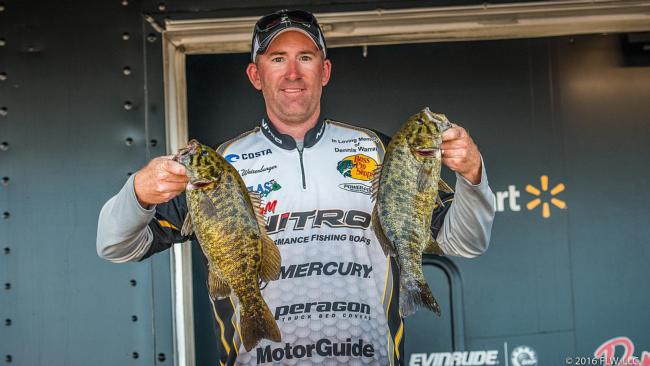 Kyle Weisenburger took advantage of the morning bite and weighed a limit of all smallmouths for fourth.

“I caught them shallow and deep in practice, but I never really hit them hard,” says the Ohio stick. “When I pulled up there today there were other guys on the shoal catching fish all around, so I think there’s a big school there. I have one or two other places that are maybe one-fish spots, but as long as that school stays there I should be able to get a limit.”

Weisenburger says that he caught about 10 bass throughout the day, but that he’s chucking a specific bait that he unfortunately ran out of today when a big smallmouth took it from him.

“I‘ve got to run to the tackle shop tonight – hopefully they have what I’m looking for.” 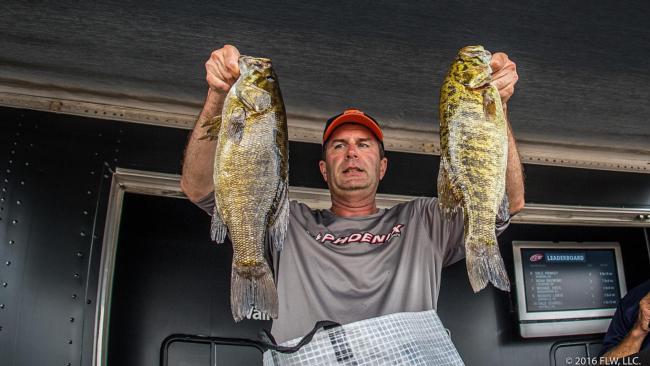 After a horrendous practice, Jeff Coble took advantage of the calm weather to run around and catch some bass.

“Today I could fish out in the lake like I wanted to, and I really just started running places that I fished 15 years ago here,” says Coble. “I caught one here and one there and just kept covering water, and you can do that when there’s no wind.

“If the weatherman is correct, it’s going to be calm tomorrow, so we’ll see. I feel a lot better about it now than I did this morning.”

Coble weighed all smallmouths and says that he’s almost exclusively targeting offshore rock with a drop-shot.