Hawk Ahead at Havasu 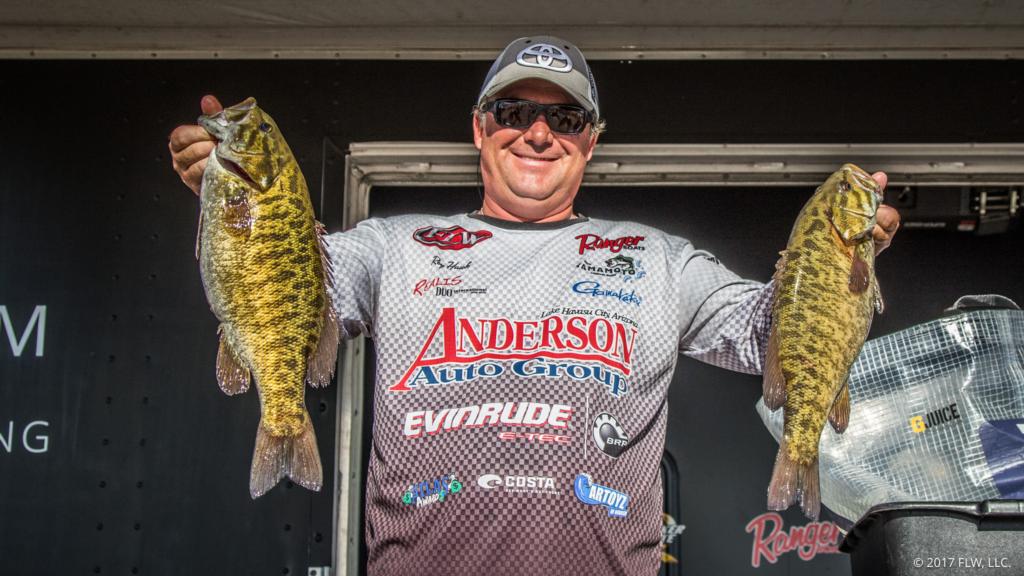 When local stick Roy Hawk located big groups of smallmouth bass a few days before the Costa FLW Series Western Division opener on Lake Havasu, he wondered how long the fish would remain in their deep spots. Today, he got the answer by way of a 19-pound, 7-ounce bag that topped the pro division.

Hawk started his day working deep structure, but when it became clear that this deal wasn’t going to deliver what he needed, he shifted gears and checked the logical progression areas – secondary points outside the spawning areas.

“I had a mental game plan going into today, we fished deeper in the morning and we caught a  couple – my partner caught  3-pounder and I caught a 3 and a 2 — but it wasn’t really going,” he says. “So we left that and tried some of my deep winter type stuff where I had caught some nice ones and pulled up schools of fish in practice.

“I hit that on six or seven different points and none of it worked out, so I finally moved into secondary stuff — secondary points, little rock piles and things like that in 10-15 feet.”

Hawk says he knew that the week’s warming trend, along with an approaching full moon, would spur spawning activity. Nevertheless, in the interest of time management, he intentionally avoided spawning fish and stuck with what he determined to be a more productive pattern.

“There’s still going to be fish out deep in that winter deal and if you find them there, you’re likely to come across seven or eight or ten of them versus one or two on a secondary point,” he says. “That’s what I ended up doing, I’d go to secondary stuff and just catch one or two before moving on to the next one.”

Hawk says he ran approximately 30 secondary points to amass his weight. He caught his fish on a deep diving crankbait and a lipless crankbait. The former, he used to target largemouth bass around brush piles, while the latter was his choice on those secondary points.

One of the keys to Hawk’s productivity was time management. Rather than blistering a spot with dozens of random casts, he lined up particular presentations and made them efficiently.

“On those points, I know exactly the cast I needed to take,” he says. “So, I’m just taking a couple of key casts and if nothing’s there, we’re gone.”

“Usually, this time of year, you’ll get a little wave of three or four that move up onto a grass flat, but I couldn’t get that going,” Hawk says. “Maybe tomorrow with some wind, they might move into that flatter stuff.” 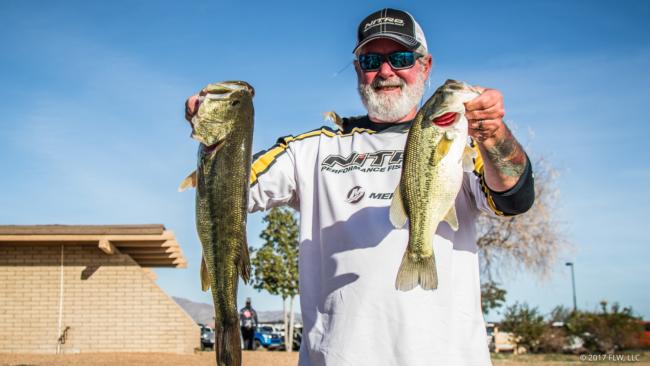 Local co-angler Ronald Ratlief caught one of the day’s biggest fish –  a 5-9 – and while that kicker fell short of his division’s top catch, it gave him the boost he needed to sew up the lead with three fish that weighed 10 pounds, 7 ounces.

Notably, Ratlief’s big fish bit in the first hour of his day. A reaction bait tempted this bite.

“It seems like the fish were moving up, and it was on a secondary point in probably 10 feet,” he says.

Ratlief says he and his pro ran around a lot and he caught his second and third fish at opposite ends of the lake.

“You try to make every cast count, you try to work around the pro and watch where he’s going,” he says. “With the big fish I caught this morning, I threw the opposite way – out in the deeper water.”