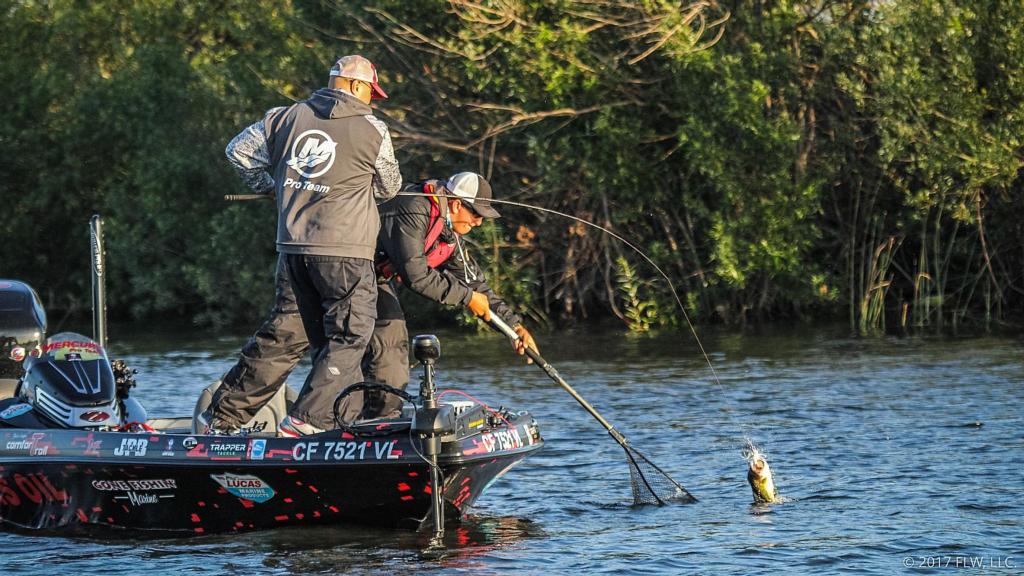 Reaction baits the primary tools early on
May 11, 2017 • David A. Brown • Toyota Series

The California Delta, with its tidal complexities, is always a fickle fishery. However, this vast central valley drainage has put on her pouty face for day one of the Costa FLW Series Western Division event presented by Power-Pole and hosted by Russo’s Marina and Sugar Barge RV Resort and Marina.

Several weeks of fluctuating temperatures gave way to a pleasantly stable warming trend that lasted through Wednesday. Unfortunately, day one dawned to a forecast for windy conditions and daytime highs of more than 10 degrees lower than those of the previous week. The fishery seemed to be heading toward a big spawning wave, so it will be interesting to see if reproductive instinct can power through this funky spring weather.

FLW Senior Content Manager Jesse Schultz and I covered a lot of water, but it’s possible that a fortunate few dropped toads in the livewell beyond our lenses. We saw enough action to know that it’s not a total shutdown, but quality fish were rare. The best catch we witnessed was Brian Trussow’s 4-pounder that he caught early on a spinnerbait.

Of course, this is the California Delta, and the next double-digit day-maker could be only a cast, flip or punch away. A few anglers such as pro Ken Mah and co-angler James Tate had limits early, but we’re expecting the significant upgrades to come in the day’s latter half.

Day one began with the tail end of an incoming tide, so most of the tournament day will see outgoing water. Typically, higher water bodes well for the reaction baits – buzzbaits, topwater walkers, bladed swim jigs, spinnerbaits and crankbaits – while low water favors sight-fishing.

You can certainly sight-fish during a high tide, but remove a foot or more of depth and beds and bass become easier to see and easier to access. Wind also affects visibility, so if anglers get a break from today’s breezy conditions, calm water plus sunny skies might lead to fireworks.

Notably, one angler mentioned finding spawners on riprap banks. That’s not unheard of, but certainly a departure from the usual pattern of looking for clear bottom amid tules and hydrilla. Elsewhere, anglers reported catching fish on drop-shots, Senkos, topwaters and buzzbaits.

The day-one weigh-in will be broadcast live at FLWFishing.com starting at 2 p.m. PT.