Lee Takes the Lead on the Delta 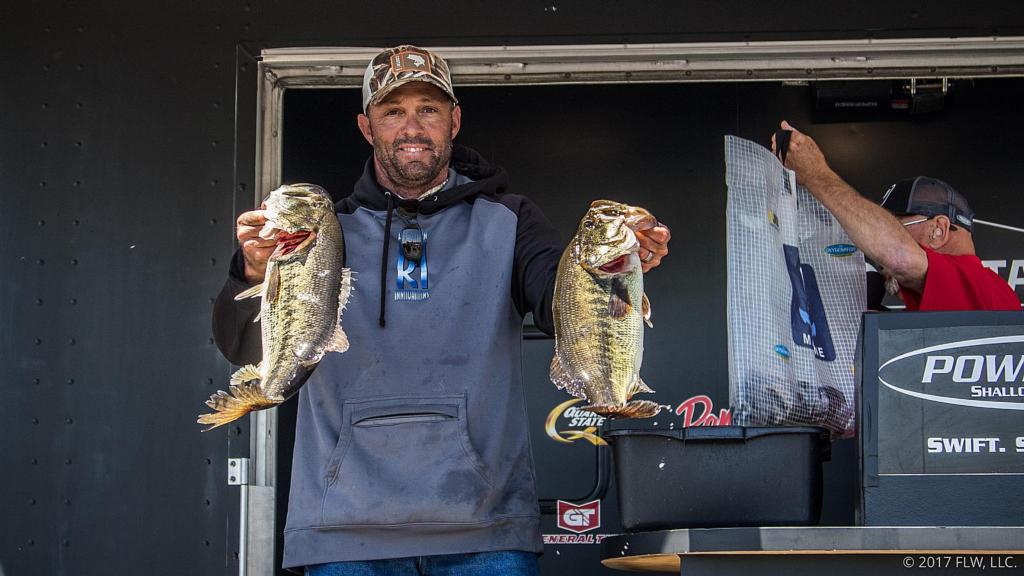 Robert Lee Photo by Jesse Schultz.
California pro up by more than 5 pounds (updated)
May 12, 2017 • David A. Brown • Toyota Series

Despite having more than two decades of California Delta experience, Robert Lee did not need to fish a single one of the hundreds of spots he’s amassed over the years today on the second day of the Costa FLW Series event presented by Power-Pole and hosted by Russo’s Marina and Sugar Barge RV Resort and Marina. Yet he was still able to take over the tournament lead with 40 pounds, 15 ounces.

Entering the day in second place, the pro from Angels Camp, Calif., backed up his day-one weight of 21 pounds, 1 ounce with 19-14. This he did without the reaction baits that produced some of his keepers yesterday. Today’s fish – all postspawners – bit wacky-rigged Zoom Trick Worms and Reaction Innovations Pocket Rocket soft stick baits.

“I fished the wacky-rigged worms because you can twitch them and they kind of go back and forth in the same spot, and it gives them a chance to come up and eat it,” Lee says. “If you rig it Texas style, it zooms too fast through the water.

“I caught quite a few fish, but they were all small, and then I ran into two good ones.” 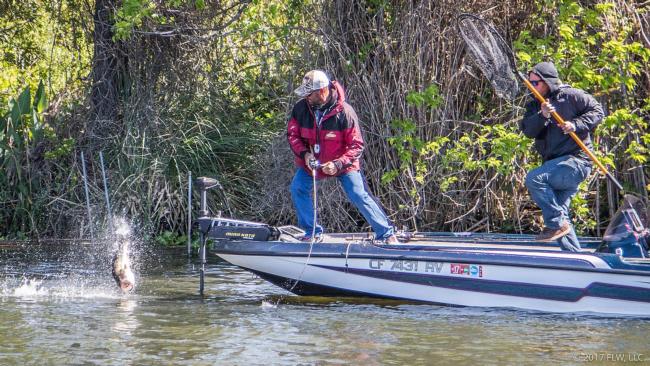 Lee used spinning tackle and a skipping presentation, but when the day’s windy conditions limited his casting, he added a small split shot above his wacky-rig hook to help make accurate casts and minimize line bow.

“I just kept moving and looking. I was just blasting points and a lot of stuff that I was just pulling out of my head,” he says. “There was a lot of boat traffic today, and a lot of people were fishing the main stuff I made famous years ago, so I ground down the sides of little inconspicuous spots that nobody was fishing. I never had trouble with any problems with anyone fishing my spots. They were overlooking a few spots.”

Essential to his site selection is clean water.

“If I pulled up to a spot and it looked good I’d fish, and if it didn’t I’d take off,” he says. “I want to fish cleaner water because it has current. These postspawn fish want a little current – not too much, not none, just right.”

The current keeps vegetation cleaned of the soupy green algae that clogs areas with less water movement. With an outgoing tide throughout most of the fishing day, Lee caught the majority of his weight in the mid-morning hours. 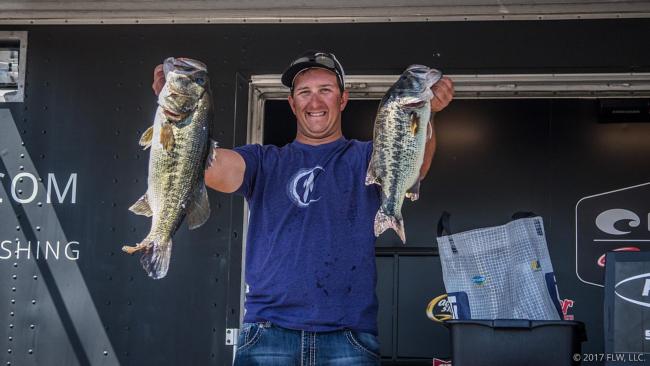 Undaunted by a slow start, Conrad Demecs rallied back from a 42nd-place day-one effort of 7 pounds, 11 ounces by sacking up a limit that weighed 20-8. The big day-two limit gave him the co-angler lead with 28-3 overall. Reaction baits – and the space to effectively present them – proved essential to his success.

“My pro [Marty Lawrence of Mesa, Ariz.] gave me a good amount of water to really be able to fish the way I wanted to fish, and I was able to catch every fish that bit,” Demecs says. “It was a grind. I only got six bites all day, but they were the right ones.”

Demecs used two different reaction baits. Although he declined to name the baits, he says that his main bait produced four of his five keepers.

“They were up on the tules, just sitting around and recovering after the spawn,” he says. “You had to make them react, but when they reacted, they were good ones.

“We hit one stretch for about six hours. We just went up and down, up and down. If you made the right cast on the right side of the tules, they ate it.”

Noting that he had his limit by about 10 a.m., Demecs says he caught most of his fish on high tide.

“As soon as that tide started dropping about 11:30 it got really tough, and we abandoned the area. But it was good until then,” he says.