Tennessee pro pounds 25-2 on day one at Kentucky Lake 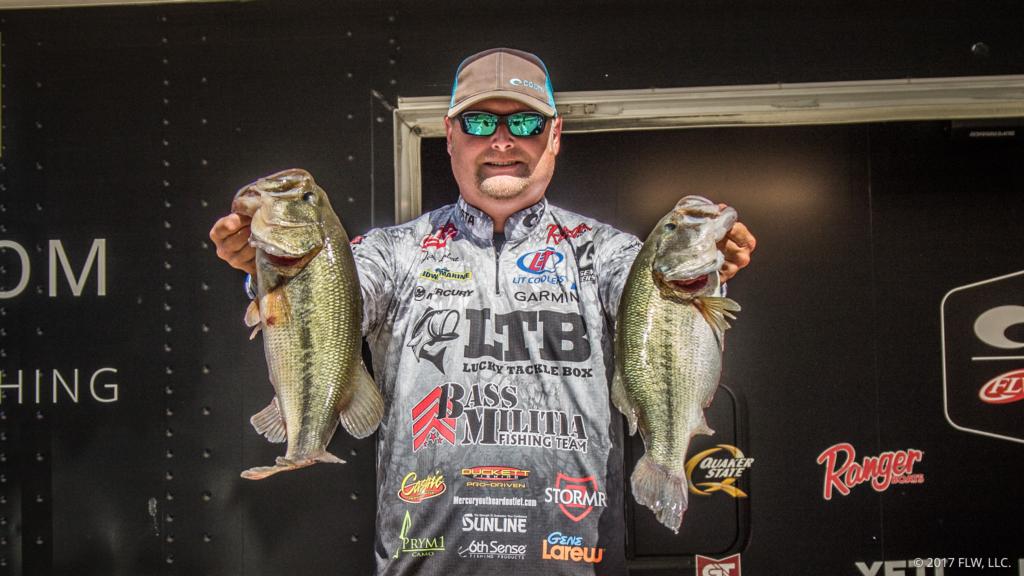 There’s a reason his image appears with the title “The Ledge Hammer” on the current issue of FLW Bass Fishing magazine, and Jason Lambert justified that distinction by sacking up 25 pounds, 2 ounces to lead day one of the Costa FLW Series Central Division event presented by Lowrance on Kentucky and Barkley lakes.

Currently, the sister reservoirs in western Kentucky and Tennessee are in full-on ledge mode, and Lambert is among the sport’s best at targeting ledge bass. He says his action started almost immediately, and he had a limit in the livewell within the first half-hour. But while the early quantity provided a good foundation, his better quality was yet to come.

“I caught like 17 to 18 pounds really fast, but I think I only weighed in one of those fish,” Lambert says. “I got on two little tears this afternoon in two different places. I culled one about one o’clock, and then I caught two big ones about two o’clock. My bites were early and late with a lot of dead time in between.”

To fill the dead time Lambert ran from spot to spot, graphing bottom and evaluating each school. 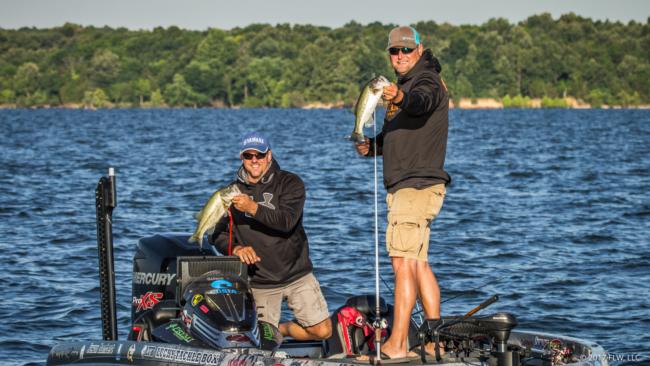 While 23 pros and five co-anglers caught bags of 20-plus pounds, day one was no cakewalk. Several top anglers reported that it was difficult to get their schools to fire. In multiple cases it was an all-day grind to get a limit.

Two key elements likely impacted the game. One was a mild cold front that knocked a few degrees off the daytime highs and delivered high-pressure conditions. The other was the level of water flow. Recent rains have raised the lake level to about a foot above normal summer pool. In an effort to bring it back down to that 359-foot normal level, dam operators are pulling a lot of water through the system.

“We have a ton of current right now, and the fish are harder to see in all that current because they hold tighter to the bottom,” Lambert says. “It’s about the organization of the fish; they have to be organized. If you see them scattered here and there, they’re harder to catch. As long as they’re together and kind of grouped up, there’s a chance you can make them eat.”

Usually during this time of year anglers can expect a fairly predictable spike in fish activity during certain periods, as the Tennessee Valley Authority increases the lake’s discharge to pull more water through the hydroelectric generators to meet daily energy demands during summer’s peak usage season. But with nearly round-the-clock current, fish aren’t positioning and feeding as regularly.

“Typically, the lulls happen midmorning, like 8 to 10 a.m., but we’ve had so much rain that the water’s running 24 hours a day,” Lambert says. “So it’s a matter of timing on a particular school.”

Lambert says he caught his fish on a variety of moving baits, including crankbaits, swimbaits and hair jigs. He hit 20 to 25 spots today, but his weight came from three of those spots. 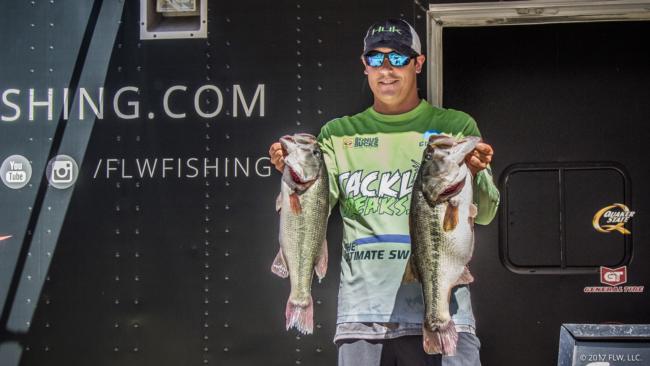 JoJo Walsh would like to have told us an engaging tale of prudent decisions and a game plan realized, but he’s really just happy to have the leading limit of 23 pounds, 5 ounces. Noting that his day involved nothing spectacular, the Lyles, Tenn., co-angler carries a lead of 1 pound, 8 ounces into day two.

“It was just a lucky day. I don’t know of anything I was doing differently than he [Bates] was. We were throwing the same baits at some point throughout the day, and I was getting the bites.”

Walsh says the day actually did not set up to favor him, as his boater often had the front of the boat pointed at the spot, which prevented Walsh from casting in the ideal direction. Nevertheless, the ledge game often leaves a co-angler with significant peripheral opportunity.

“We were moving around, and it didn’t matter where I threw, it seemed like I was getting bit,” Walsh says.

Walsh, who caught his fish on undisclosed dragging baits and on each of his seven rods, says he and Bates made a long run this morning, which cut a good chunk of time off his fishing day both in the morning and afternoon. Yet, Walsh had what he needed well before the return trip.

“I didn’t catch a fish after noon,” Walsh says. “I had a limit by 8:30 or 9. I culled a few times after that, and the big fish bit around noon. That was the last fish I caught.”