Salvaging in Florida during a cold front 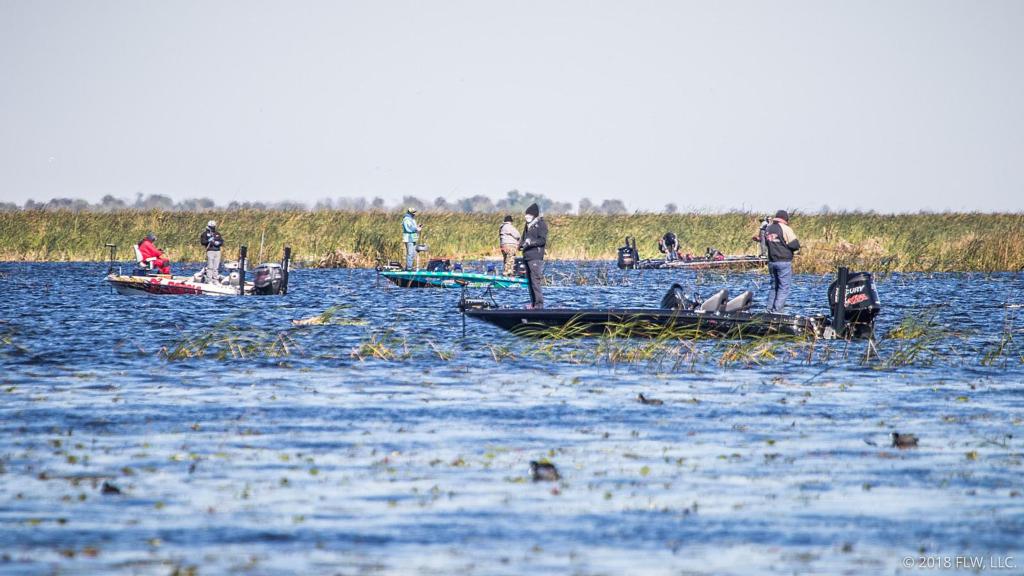 When the boats lit out across Lake Okeechobee this morning to start day one of the Costa FLW Series Southeastern Division opener presented by Power-Pole, weather apps professed the local temperature to be somewhere in the 32- to 34-degree range. And while that might not have broken record lows at the Big O, it was certainly some of the lowest temperatures the area has experienced in a couple of years.

Tournament leader Terry Tucker of Gadsden, Ala., was the only pro to break the 20-pound mark. He caught 21 pounds, 3 ounces in an area where he found spawning fish before the cold front happened.

Others in the top 10, however, had to counter the elements with an array of strategies that included a lot of “backing up to punt.” The phrases, “just tried to survive,” “decided to just fish for a check” and “hoping to salvage my day” were used a lot at weigh-in.

Here’s a closer look at how others in the top five fared. 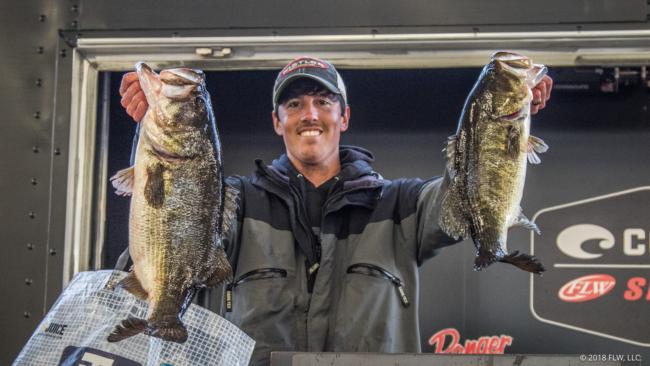 If you were wondering who caught the biggest bass on day one, look no further than Justin Hamner, who landed a 9-pound, 8-ounce Okeechobee giant to propel him into second place with a five-bass limit weighing 19 pounds, 3 ounces.

Hamner’s beast was his first fish of the day.

“I was freezing to death for about the first 10 minutes this morning,” Hamner recalls. “Then I hooked and fought that big one and got it in the boat, and suddenly I was sweating to death. It’s amazing what a big fish like that does to you.”

Hamner was initially concerned when he first pulled into his primary area this morning because the water clarity had deteriorated to some degree.

“It was definitely darker,” he says. “But I felt like the fish were committed and weren’t going to leave the area. The one thing I did do was make a bait change. I switched to a bait I haven’t fished all week. But with it being so cold and turned up, I figured I better change up.”

When the big one tugged his line, he knew he had found the right program.

“After the big one, I caught three more pretty quick,” Hamner says. “No. 5 took a little longer, but I pretty much had what I weighed in at 9 or 10 o’clock. From that point on, I backed off the main area and tried to expand out while guarding the best zone. Fortunately, nobody else ever tried to get in there. I think there are a lot of fish in that one section; I can’t wait to find out tomorrow.” 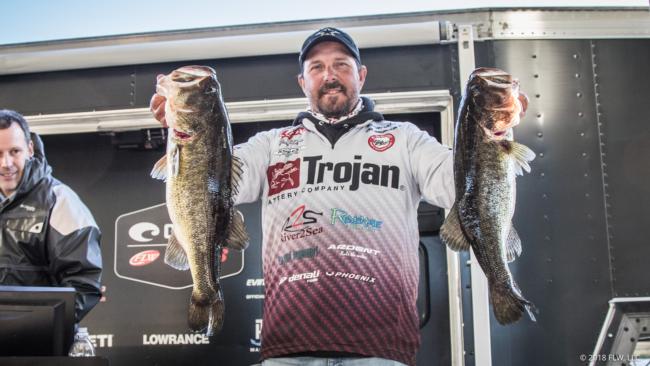 Veteran Florida pro Darrell Davis has been around the severe-cold-front-on-Okeechobee block a number of times, giving him plenty of experience with north winds and dropping water temperatures. He only weighed four bass today, but with two near-7-pounders, he checked in 17 pounds, 1 ounce.

Davis admits that his best water was churned up, but it wasn’t unfishable.

“It had dirtied up a little bit more, but it was not chocolate milk,” Davis says. “It was still tolerable. The key for me when it does this here is to just slow way down. I have to go to slower baits that are a pain to fish in the wind, but it’s just something you have to do.

“The fish are still in these areas; it’s not like they leave. I think the fishing pressure pushes them around a lot, too, and positions them on different stuff during the day. I’m still fishing for the same fish, but I’m using different baits and fishing completely different targets than I was in practice.” 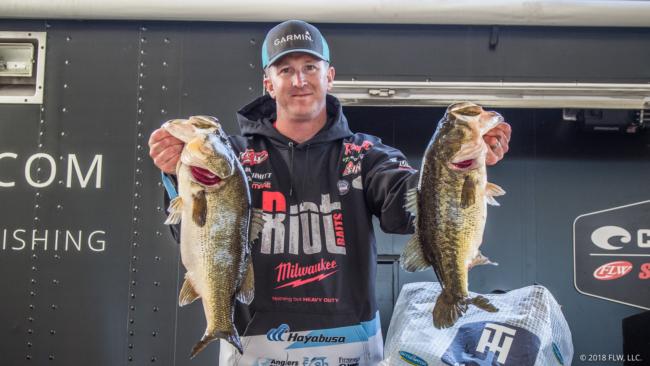 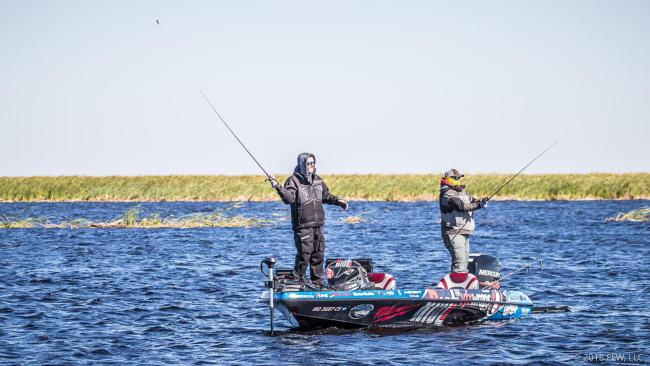 Bryan Schmitt decided to tour Lake Okeechobee for a few hours this morning before making his first cast.

“I made the run all the way south, and that didn’t work out too well,” Schmitt says with a chuckle. “I got all the way down there, pulled into my spot, looked at the water, and it was completely blown out. It was horrible. So I just cranked up and ran all the way back up north to try to salvage my day on one little patch of hydrilla I found in practice.”

That “salvaging” happened with just four fish, but two of them were big ones.

“It was a miracle day, really,” Schmitt says. “All I had was that grass bed, so I kept grinding around it. I finally caught a good one. Then I had another bite; it got my trailer. I had no time left to get another trailer out, so I just kept fishing my bait with no trailer, and I caught another big one. Crazy stuff like that normally doesn’t happen to me, but after that ride I took this morning, I’m just thrilled to have caught what I did.” 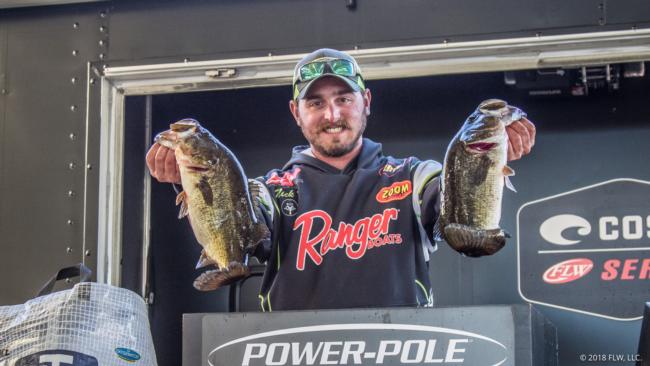 One of the cold front tricks of veteran Florida pros on the Big O is to dodge into one of the lake’s many canal systems to find stable water. Nick Thliveros might not qualify as a veteran pro yet, but his dad, Peter T, certainly is, and apparently he has taught his son well.

“Dad’s been doing this a long time, and we talked about this situation a lot during practice. He made the right call to fish canals,” the younger Thliveros says. “In fact, we spent most of our practice in canals preparing for this weather, and it paid off. I just got a few better bites than he did [Peter is in 88th with 7 pounds].”

Nick says the way he is fishing in the canals is not really a Florida style either.

“What I’m doing is more of a TVA style of fishing,” he adds. “Those canal fish are a little different. They have deeper water to relate to, so you have to fish for them a little bit differently.”

Joey Sabbagha found dirty water in his best areas this morning, but as he fished around in it he soon discovered that small zones of clearer water still existed within the area.

“I didn’t have a fish in the well until about 1:30,” Sabbagha says. “When I began noticing that there were still some pockets of clearer water in the area, that’s when I started getting some bites. From 1:30 to 2:30 I caught five or six fish from those clearer windows.”