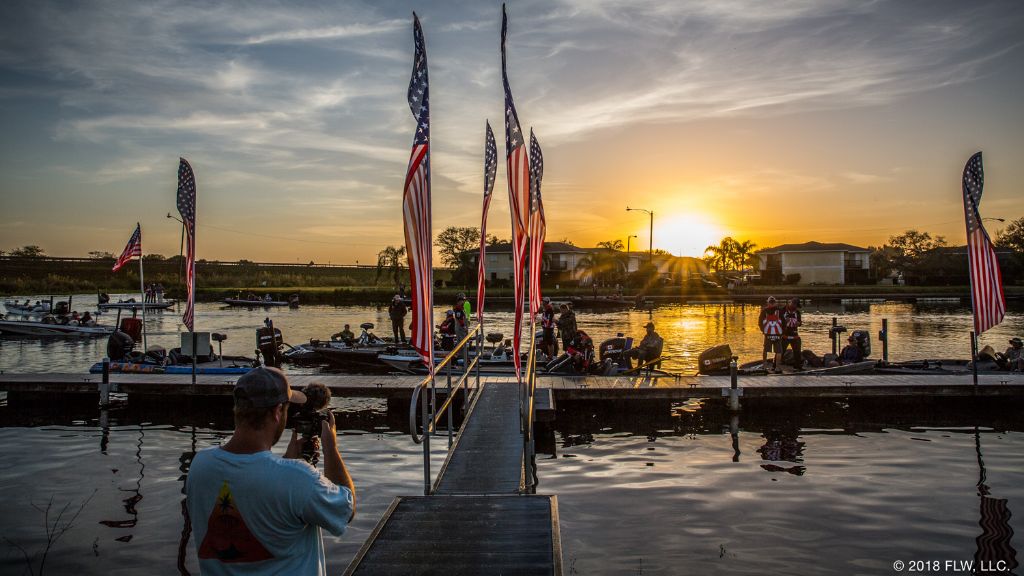 It starts with a dream; then comes the game plan. For the first-ever PanAmerican Black Bass Championship taking place Wednesday through Thursday on Lake Okeechobee at Roland and Mary Ann Martin’s Marina & Resort, that goal is to someday see the Big O’s signature species pursued beneath the flag of five interlaced rings.

“The international fishing community is thrilled about this event,” says tournament organizer and CIPS Vice President John Knight. “It fits perfectly into the global initiative to increase participation in bass fishing. Steps like this are making bass fishing the frontrunner when fishing becomes an Olympic sport.”

USA Bass brings five of the 22 two-person teams in a field that also includes six teams from Mexico, eight from Canada and three from Costa Rica. Accompanied by an official observer, each team will fish for daily five-bass limits, with the winner determined by the heaviest two-day weight. At stake are gold, silver and bronze medals for individual teams, and a separate medal competition for countries.

Harnessing the visibility and influence of top-tier U.S. bass pros will, no doubt, benefit this effort. Fishing for the U.S. are three past Forrest Wood Cup champions – FLW Tour pros John Cox (2016), Scott Martin (2011) and David Dudley (2003) – along with nine-time Bassmaster Angler of the Year Roland Martin.

“I’m very proud to represent Mexico,” says Gonzalez, who teams with Arturo Saldana. “It’s an honor for us, and we will do our best to represent our country with dignity.” 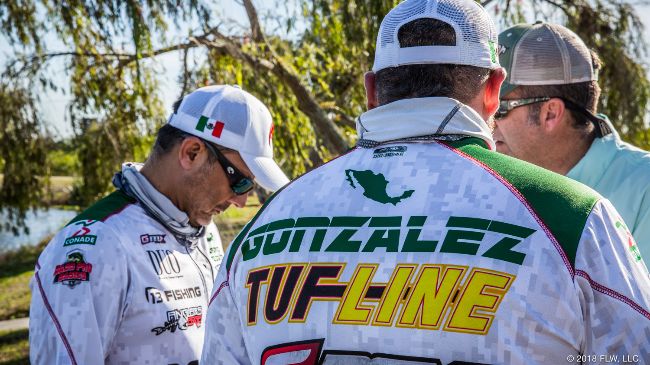 Martin, who recently competed in the 2017 Black Bass World Championships on South Africa’s Vaal River in October, says he’s approaching this event with the same determination and enthusiasm as his FLW Tour competition.

“What an opportunity this is for Team USA, having these other teams here. What I was so impressed with, when we were in South Africa, was how serious everyone was. I mean, this is a big deal.”

Dudley says he’s honored to participate in what could be the foundation of a bass fishing milestone.

“Any angler out there would love to say ‘I was part of the process of getting this sport into the Olympics,’” he says. “It’s an honor to be here, and I really believe that one day, bass fishing will be an Olympic sport. And one day, every angler will appreciate the hard work that went into making that happen.

“And fish don’t discriminate against age, so I’m not going to say no to the possibility that I could be a part of that. I would hope to be.” 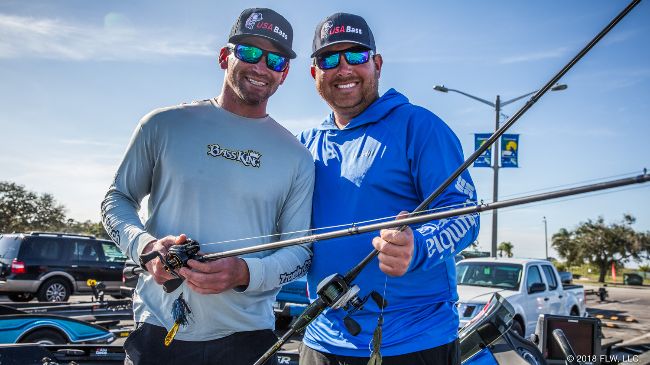 “I’m really excited about this because it’s a team tournament, and I’m usually fishing alone as an FLW Tour pro,” says Scott Martin, who will compete alongside his father, Roland. “I’m fishing with my father this week, but going forward [in future events], I’ll fish with other USA Bass anglers. This is a neat opportunity to fish with guys you never get a chance to fish with.”

Dudley agrees and adds this thought: “In this tournament, we’re more open with our teammates than we would be in a traditional tournament. Usually, we might just give little clues as to what we’re doing, but this one really is a collective Team USA effort with a lot more detail because we’re pulling for each other.

“Once we’re on the water, we’ll be trying to catch the biggest bag we can, but strategy-wise, we’re all working together.”

For Cox, the event offers the chance not only to follow up on his vicarious interest in the 2017 Black Bass World Championship, but also to reunite with a tournament partner.

“When I got the invite for this event, I was super excited, but then they told me I got to pick my partner for the tournament,” he says. “I went and got Keith Carson who I’ve fished with for 16 or 17 years. It’s been an awesome week getting to fish together.”

Team Canada’s Cole Bailey partners with Bruce Leeson, a retiree who winters in Clewiston. For Leeson, it was an easy decision to participate, but Bailey was just as eager to journey south from Thamesford, Ontario.

“Our team captain, Bob Izumi, called and asked if I’d like to participate, and I said ‘Of course I would.’ yYou can’t pass up the chance to represent your country,” says Bailey. 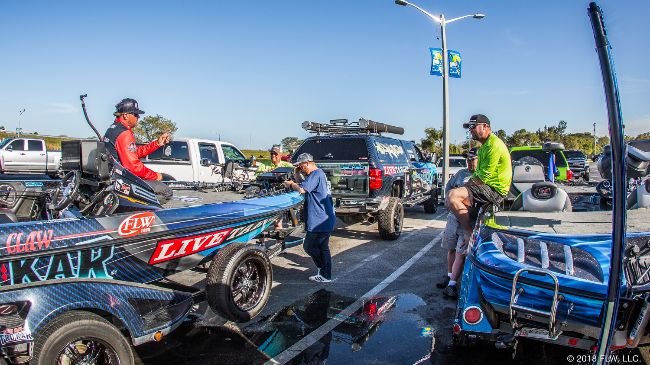 “The lake is fishing really good right now; I think there’s going to be a lot of fish caught,” Scott Martin says. “The key is going to be getting the big fish, but I think it’s a good week for that to happen. I think there’s good potential we could see some 25- to 30-pound bags. There are some big ones out there.”

Anglers reported encouraging practice results, with a good number of fish on beds and what appears to be another wave staging for their big move. Competitors reported getting bit on the usual mix of swimbaits, bladed swim jigs, lipless crankbaits and flipping/punching rigs.

“It’s hard to find a good spot, because it all looks good,” Gonzalez says. “We had almost 19 pounds a day in practice. Each day, we had a kicker of 6 to 7 pounds. With these conditions, I think you’ll need four good keepers and one kicker every day.”

Cox agrees that Okeechobee is on the upswing.

“The lake is still really dirty [from windy conditions], but it’s cleaning up in areas. When we were here two weeks ago for the Tour, there were a lot of fish out in that nasty water, and there weren’t many that were moving in,” he says. “They’ve started to make that push, and I think it’s going to fish well these next two days. There’s everything you could ask for in a tournament. It’s going to be exciting; there’s going to be some giant bass caught.”

Martin, whose family name is synonymous with Lake Okeechobee, hopes this week’s event will be a “kicker” of sorts for the sport of bass fishing.

“I want to keep supporting this effort to advance bass fishing on the international level,” he says. “I really think it’s going to grow. You know, the very first FLW tournament came here years ago, so I think having the PanAm here is a sign of things to come.” 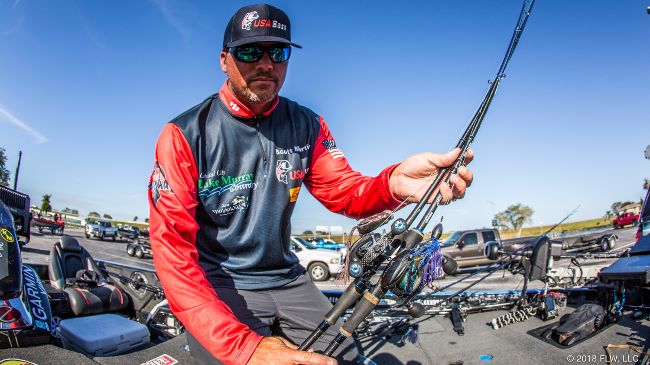