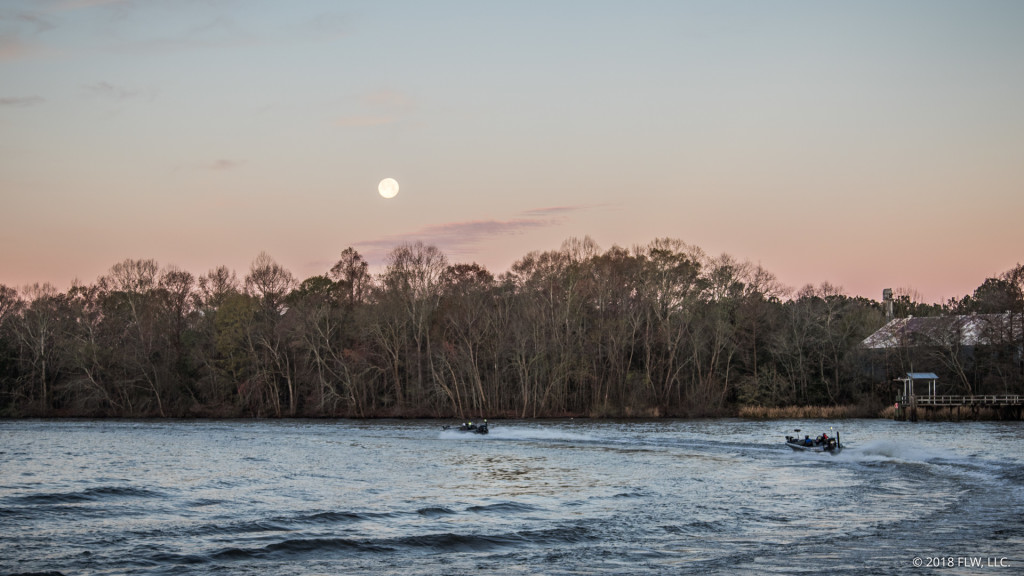 After waiting out a canceled day one, the competitors are ready to get the second Costa FLW Series Southeastern Division event of the season underway. Taking place on Lake Seminole and presented by T-H Marine, the event is now a two-day shootout, with the full field fishing Friday and Saturday.

Lake Seminole is a U.S. Army Corps of Engineers reservoir located in the southwest corner of Georgia along the Florida border. The Jim Woodruff Lock and Dam, a mile-long earthen structure with a single lock, impounds the Chattahoochee and Flint rivers, which join in the lake, before flowing outward as the Gulf of Mexico-bound Apalachicola River. With Spring Creek branching northward off the Flint, Seminole contains 37,500 acres.

Measuring 35 miles long, but no more than 2 miles wide, Lake Seminole extends upstream along the Chattahoochee River for 30 miles (48 km) and up the Flint River for 35 miles. The lake’s depth averages 10 feet, but a few spots drop to 30.

Currently, Seminole stands about 6 inches above full pool of 77 feet. This means all the shallow cover — wood, lily pad fields, coontail, hydrilla, pepper grass — should be in play. Offshore humps and contour breaks probably won’t be the primary deal, but they could factor into the overall picture. 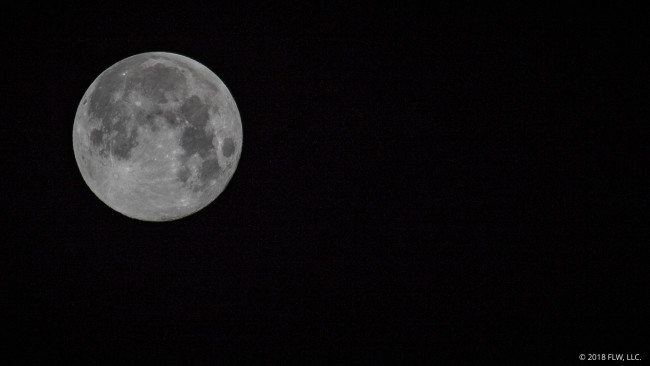 Georgia’s Buddy Gross, who won last year’s FLW Series event at Seminole says that Spring Creek and the Flint both have a fair amount of stain, and that the clearest arm is currently the Chattahoochee.

Thliveros describes Seminole’s overall condition as good, although he has noted less grass than in year’s past. This, he says, is mostly due to a harsh winter.

“It gives you move water to fish, but there’s a lot less vegetation,” Thliveros says. “The vegetation in some areas is distressed and in some areas, it’s very healthy and prolific.”

One possible key is the full moon – it's presence could keep fish coming to the bank despite the slight cold front. 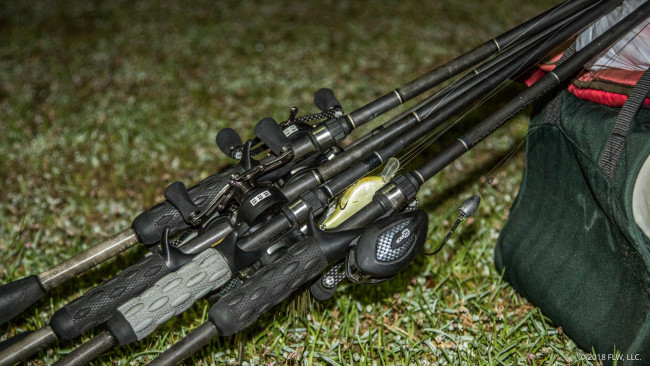 Thliveros says he’s looking for a lot of spawning activity with plenty of sight-fishing opportunities. A recent warming trend plus this weekend’s full moon cycle should crack the whip on ripe largemouths. This, of course, is a double-edged sword.

“Given the number of boats, this lake fishes very small, especially when they’re spawning,” Thliveros says. “There’s just a lot of people looking at the same fish and doing the same thing. It’s going to be tough for sight-fishermen because there are a lot of people competing for the same fish.”

Gross says the lake has already seen a big spawning wave; but considering the large biomass, he knows there are many more to come.

“Sandy bottom is the big key and it can be the creek flats or up on the bank against reeds,” Gross says. “This lake is just full of big fish – they’re everywhere.”

“Some of the fish are beginning to show up offshore, so I think there’s going to be several ways to catch them this week,” he says. “There are some postspawn fish and some prespawn. You’ll have several stages going on during this tournament.

“I think, in addition to sight-fishing, just some random Senko fishing is going to be really big and then, the hydrilla bite is going to be really good also. There will be a Rat-L-Trap bite, a swimbait bite, a spinnerbait bite and, if you find any holes in the grass – flipping. It will be a wide-open deal for everybody to be able to do whatever they want to do to catch them.”

Thliveros agrees and points out that the smart money will be on the angler with a diversified game plan. This event will definitely offer distinct areas of greater potential with red-hot windows of opportunity. The key, Thliveros says, will be to capitalize on the key moments and grind it out the rest of the time.

Finding clean water will be an ongoing concern, especially with a late-season front that blew in on Thursday. The temperature decline does not look like it will be enough to push back willing spawners, but the wind is a different story. A southwest blow gusting to 25-30 mph will likely churn an already turbid lake and make it fish even more congested, as anglers struggle to claim fishable areas.

“I think people who found bedding fish on the western banks are going to be in the best shape because the wind,” says Gross. “Some guys will fish the lily pads to stay out of the wind. I don’t know if that will hold up, but you can get a big bag off of it for a day for sure. There’ll be fish spawning in the pads, but there will also be a lot of fry guarders too.” 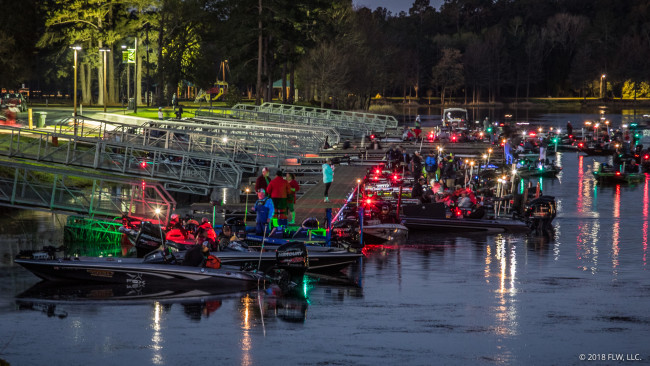 Coming off his top 10 finish at the FLW Tour event on the Harris Chain, Gross had a short practice that was limited by battery issues. The first of his two practice days was minimal, but Wednesday found fish positioning shallow where he wants them.

Gross thinks daily weights of 17-18 pounds will earn a top 10 spot, with the winner tallying at least 60 pounds.

Thliveros agrees, but he stresses the importance of fishing with an open mind.

“I had an up-and-down practice,” he says. “There was no one particular thing that I could settle on. I think it’s going to be one of those deals where I have to try an early morning moving bait to try and get a feeding bite. Once the sun gets up, I think it will turn into the fish pulling up to the beds and spawning.”