Consistent McCoy Gets the Win 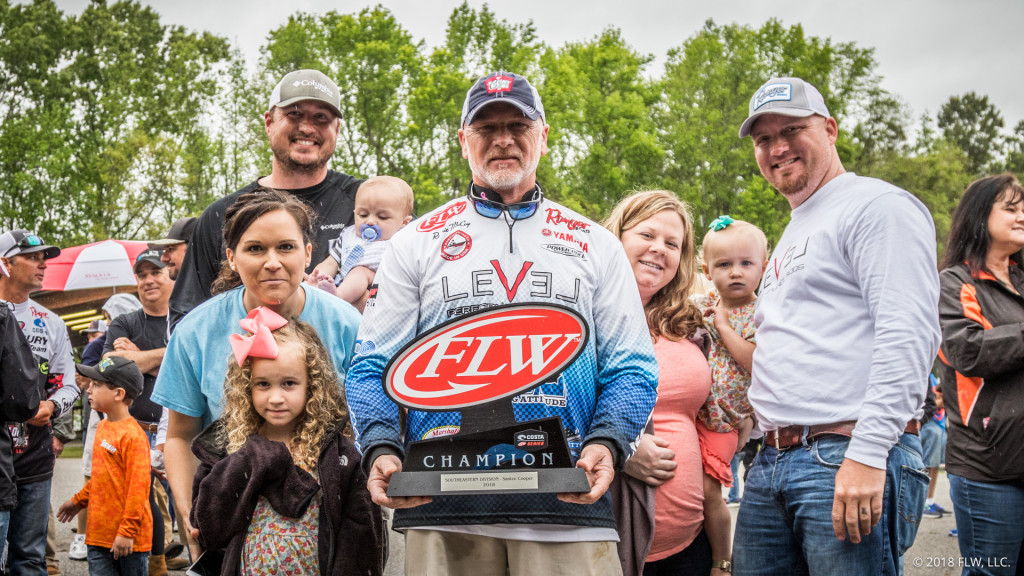 Before the Costa FLW Series Southeastern Division event on Santee Cooper began, there was a little saying going around that was the tipoff for an impending slugfest: Bring ’em big, or bust.

Ronnie McCoy of Lamar, S.C., took that adage to heart. He brought them big the first day with 26 pounds, didn’t bust the second day with 21-6 and then brought them the best the final day with 26-2. All totaled, McCoy wrangled 73 1/2 pounds of Santee Cooper bass to win the event by a 5-11 margin and pocket a total prize purse of $93,500.

“This is the fourth Costa event I’ve fished on this lake trying to make this happen,” McCoy says. “The highest finish I ever had was 19th. So to finally win one of these on this lake in front of my friends and family is a true blessing.”

McCoy’s journey to the winner’s circle involved getting the best out of two of Santee’s primary patterns during the week: the bass spawn and the shad spawn.

On Tuesday of practice, McCoy launched his boat in the upper portion of Lake Marion and immediately noticed a shad spawn occurring on a primary point with cypress trees. Two bites told him all he needed to know about that pattern, and he spent the rest of practice looking for more spawning shad and bedding bass.

When day one of the tournament dawned, he decided his best bet for getting the event started off on the right foot was to go secure a limit on the shad spawn first. After securing a quick limit of about 15 pounds, he checked some of the beds he had found in practice to hunt for fish that could help him upgrade. But by the time he made it down the lake to Potato Creek to sight-fish, most of his fish had either abandoned the beds or had already been picked off.

“So after that, I just went looking for new fish,” McCoy recalls. “I was trolling along throwing a frog and looking when I looked down and saw two huge bass on a deep bed. I made a flip into the bed with a Zoom Roadkill Craw in green pumpkin, and the biggest one bit on the very first flip.”

That bass weighed in at 9-9 and took the Big Bass honors on day one.

“After I settled myself down, I stood up, looked down and the other big one was lying right there in the bed. Three flips later I caught her.”

That bass weighed an estimated 7 pounds.

A little while later McCoy caught another 6-pounder off a bed and ended up culling out all of his shad spawn fish with bedding fish to the tune of 26 pounds to start the event in third place.

Knowing he had squeezed all of the good out of his sight-fishing pattern on day one, McCoy decided to lean a little harder on the shad spawn up in the swamp on day two.

“The shad were still spawning, but they weren’t up near the surface like they had been in practice,” he says. “Instead, they were spawning down around the bases of the cypress trees, and I had to go to a spinnerbait and a ChatterBait to make the bass bite.”

Another interesting thing McCoy noticed about the spawning shad: They were only spawning on certain, individual trees among the several dozen that made up the point.

“Once I found the right tree that had an active shad spawn on it, I’d either catch a bass or catch a shad,” he adds. “It was obvious. I could get bit off just those trees again and again. But there were only a few trees like that.”

His day-two shad spawn pattern was strong enough to keep him from dipping below the 20-pound mark for the day. McCoy was the only pro to bring 20-plus pounds all three days. He entered day three just 1 pound behind the leader, Daniel Howell. If he was going to catch Howell on the final day, McCoy knew the shad spawn bite was going to have to light his way into victory lane. 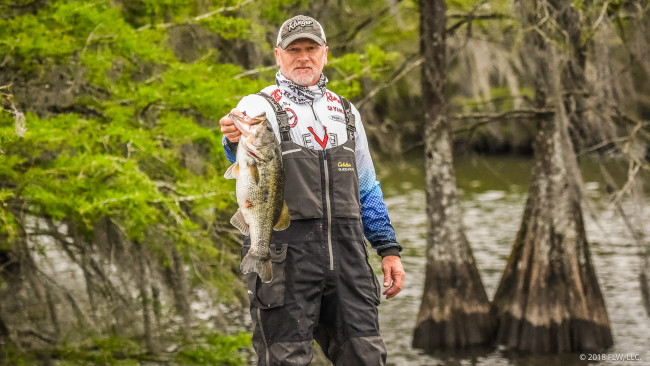 With just 10 boats in the field and an earlier takeoff time on the final day, McCoy arrived to his spot earlier than he had all week. Weather was also playing to his favor as clouds and a perfect breeze graced his best cypress tree point.

Within 90 minutes this morning, McCoy sacked up 20 pounds. By weigh-in time, he had amassed his best limit of the week, 26-2.

“I remembered from yesterday which trees were the exact ones that had the shad spawning on them,” he details. “But today they were using completely different trees. So it took me a while to fish the point and figure out which few trees were the active ones today. Once I keyed in on those, I caught some big ones.”

“I kept alternating between those baits, making repeated casts to those few trees that had an active shad spawn going on,” he adds. “I’d fish other trees while letting the primary ones rest, but most of my fish came from just a handful of the same trees.”

The tournament was presented by Bass Pro Shops and hosted by the Clarendon County Chamber of Commerce.