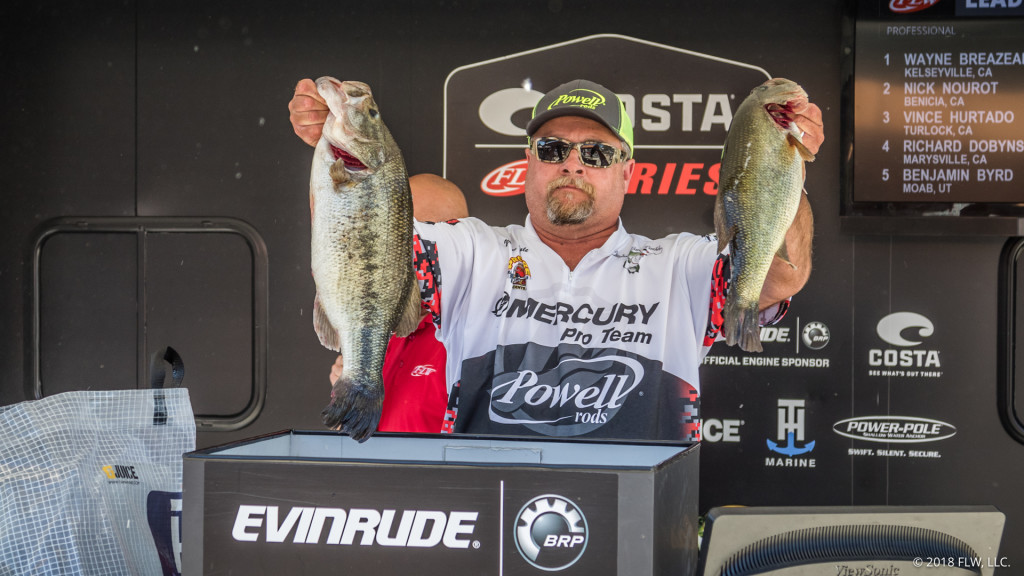 Clear Lake nearly delivered a devastating one-two combination for Wayne Breazeale, as he lost a 3-pounder less than 20 minutes after a 4-pounder shook the hook. But the Kelseyville, Calif., pro allowed himself some necessary venting, regrouped and caught 22 pounds, 7 ounces to maintained his lead at the Costa FLW Series Western Division event presented by Evinrude.

Entering day two with a 1-pound, 14-ounce margin over double-tough Arizona standout Joe Uribe Jr., Breazeale extended his lead to 5 pounds, 2 ounces with 46-1 total. The course, however, was something of a roller coaster, and the leader credits his spouse for a helpful dose of motivation.

“When I lost those two fish, it was in my head the whole morning,” Breazeale says. “Before takeoff, my wife told me I just have to calm down today. I listened to what she said, and I just went fishing. I don’t know how I did it; that was frustrating.” 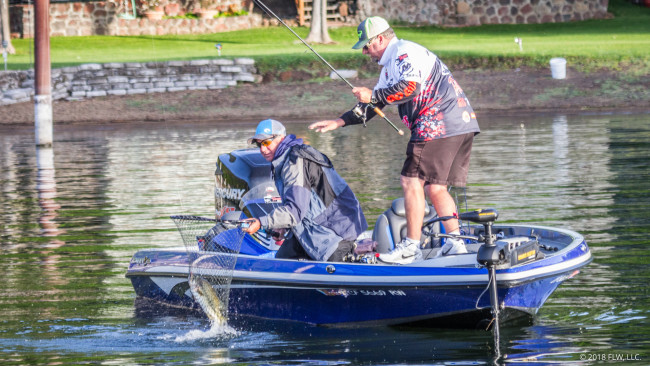 Breazeale got his show started early with a chunky keeper that bit a drop-shot with a Roboworm in the margarita mutilator color under a dock at the lake’s south end. Continuing along the same shoreline, he worked a variety of docks – marina complexes and individual structures – plus tule lines, rocky shorelines and a riprap wall.

By the time he was about a quarter of the way into the latter, Breazeale had five bass in his livewell.

“After I caught my limit at that first spot, I just went around and picked up one here and there. I caught a big one that was about 6 pounds,” Breazeale says.

Breazeale visited a few more docks, but he focused most of his midday effort on thick tule shorelines, with the fish holding in about 4 feet of water. As with day one, his local knowledge helped him identify the tules growing on hard bottom – a necessity for south end spawners – and was able to cull out most of his morning fish.

Unlike day one, when the fish were holding deeper on the tules, today they were pulled up tight to the canopies of dead tules. Seeking shady solace from the day’s intense sunlight, these fish were snapping at his drop-shot as it fell past the cover.

“My biggest fish was a bed fish,” Breazeale says. “I sight-fished that one with a wacky-rigged Senko. It didn’t take me long; probably 5 minutes.”

Breazeale downsized to 8-pound-test fluorocarbon line and took his time with each hooked fish.

“You just have to let them go where they want and chase them down,” he adds.

Two days of mostly sunny conditions have helped raise the Clear Lake water temperature, but Breazeale is concerned that changing conditions from today’s blustery afternoon winds will impact the bite.

“It could be like starting over tomorrow,” he says. “I’m not sure what the wind’s going to do tomorrow. It could put them off again.” 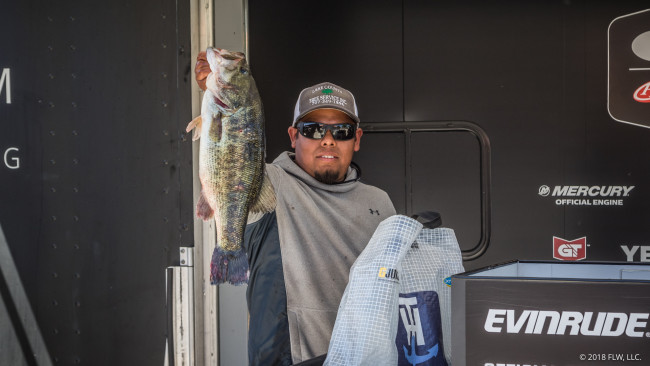 Juarez moves up to co-angler lead

Jose Juarez, who started day two in 10th place, caught the day’s fourth-largest co-angler bag – 16-4 – and took over the lead with 30 pounds, 4 ounces. The Kelseyville, Calif., competitor leads the co-angler field by 6 ounces over Derek Gray.

Despite his improvement, Juarez says that picking his way to a good bag was a tough task.

“I was just finesse fishing both days,” Juarez says. “I was catching a lot of fish, just not many over 1 1/2 to 2 pounds. I was catching them all day, but it’s hard to catch even 3-pounders right now. I think there are a lot of males up shallow, but not many females yet.”

Juarez caught his fish on a drop-shot and a rip bait.