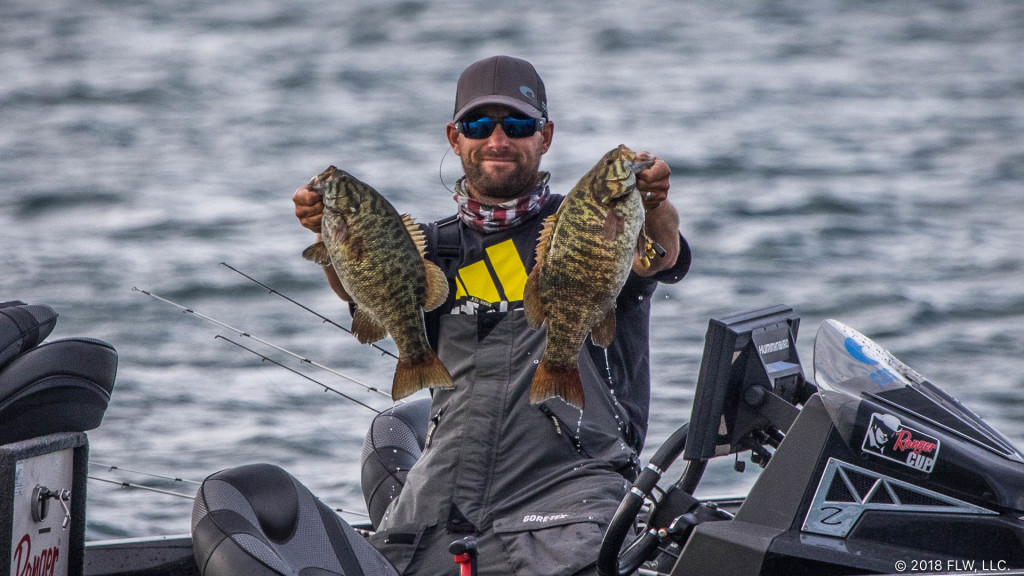 Clouds and a crisp northeast breeze greeted anglers this morning as they gathered in French Creek Bay for the final event of the Costa FLW Series Northern Division season, which is presented by Navionics. With much of the dock talk reporting a tough practice and a few conditional factors that aren’t making things easier, the gray skies and wind really aren’t helping.

Wind from most any direction at the 1000 Islands may cause a bumpy boat ride or make it tough to hold on your spot, but wind with an easterly direction can actually make fishing tough. Simply put, wind from the east pushes against the current, which can cancel it out to a degree in certain sections of the river and the lake. Just like on the Tennessee River, when the TVA pulls water, the fish bite, and when they don’t, it gets tough. The same principle applies here, except Mother Nature is the biggest deciding factor.

On a fishery as good as this one, anglers are still catching fish. We had a photographer on the lake and one in the river to start and there were definitely fish to be had.

Matt Becker and Joseph Fonzi were found early in the lake, with Becker only having one in the livewell. Fonzi reported a limit for around 18 pounds with plenty of time to upgrade. John Hunter had an early limit, though we weren’t able to get a weight estimate due to the wind. Matt Stasiak, Travis Manson and Dylan Hays were also spotted floating around, but none of them seemed too enthused about the start.

On the river side, Joseph Wood was found early with four fish for close to 14 or 15 pounds. After stopping on him, he made a few drops and took off towards the lake. Scott Dobson, who won here in 2016, was found fishing shallow but said the lack of current and no sun wasn’t helping his bite. He’d seen lots of followers, but could only make two little ones commit so far. A handful of other pros in the river echoed what Dobson said and lots of small fish were reported.

Folks fishing shallow are tossing a variety of moving baits, but the anglers fishing deep are almost solely relying on the good ol' drop-shot.

There are still a few hours left to fish on day one and the sun is starting to poke through. Plus, there are a pile of hammers (such as the Johnston brothers) who haven’t been spotted, so be prepared for some big bags to drop come weigh-in. Tune in at 2:30 p.m. ET to see who solved the puzzle on day one.