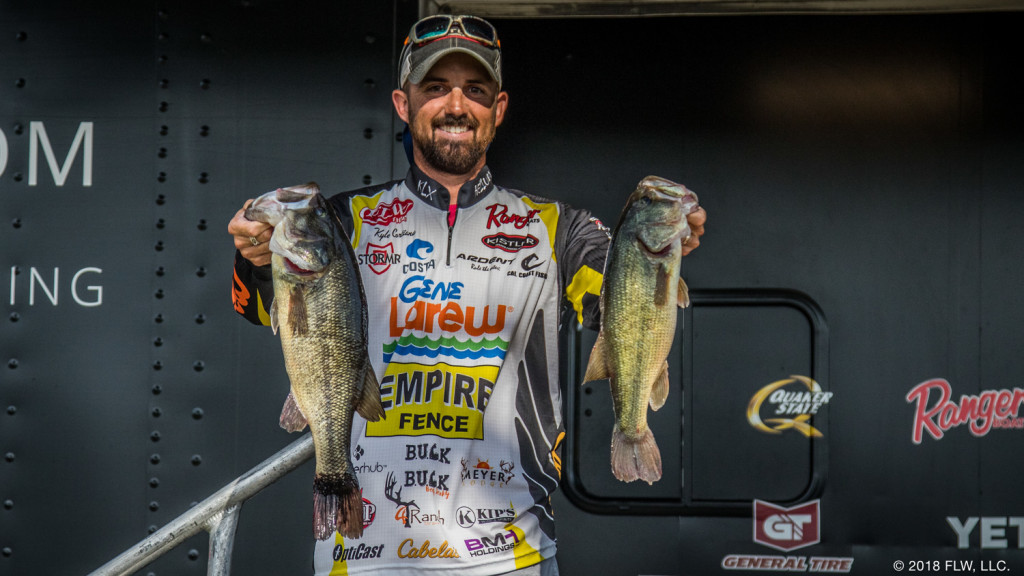 Given the stingy state of fishing affairs at Oklahoma’s Fort Gibson Lake, many pros fishing the Costa FLW Series Southwestern Division event presented by Mercury this week predicted local anglers would be hard to beat. In fact, Kyle Cortiana of nearby Coweta, Okla., was one pro who was pretty candid in offering his opinion that the home court advantage would go a long way in such a challenging Fort Gibson event.

After day one, Cortiana is looking like a prophet. Not only did he take the early lead with five fish for 15 pounds, 8 ounces, but the top five also includes Fort Gibson legend Tommy Biffle and Ryan Wilbanks, both from Wagoner.

“When the water is up and the current is flowing and the fish are biting here, it’s anyone’s game,” Cortiana says. “But the lake is fishing pretty stingy right now. Whenever that happens, the local guys shine.”

A small line of showers rolled through Fort Gibson this morning during takeoff, which Cortiana saw as bonus.

“Anytime you have some kind of change like that, it helps,” he says. “I had my limit this morning by 8:50. It happened pretty quickly. After that I left the area and just starting running new water and caught two more keepers, one of which helped me.”

Before the event began, Cortiana mentioned that finding something out of the norm and off the beaten path would be key in this tournament. That’s what he looked for in practice.

“Where I fished this morning is pretty standard stuff here, but I’m fishing for those fish in a unique way,” he explains. “I had some special things happen to me this morning. Things went my way for sure. After that I ran some water that includes something that’s somewhat new to this lake. I have one place where I caught two 4-pounders in practice, and I have not been back to that yet. I’m trying to save it for later.”

Cortiana enters day two with a 1-pound, 1-ounce lead. He has an early boat number tomorrow, which he hopes might help his cause even more.

“I had a good ride today,” Babb says. “Derek was a great boater. He is very considerate and obviously had me around some good fish.”