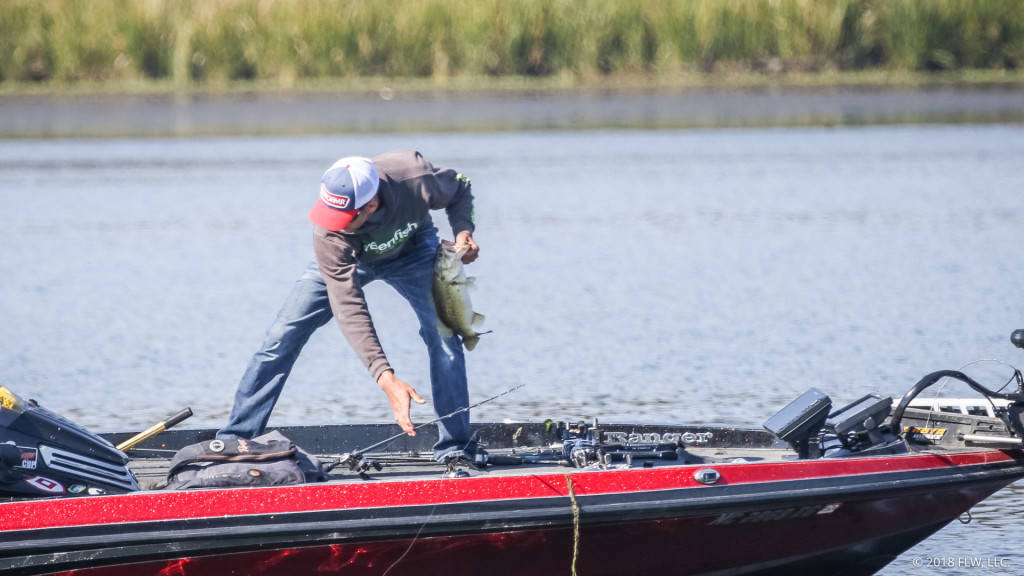 Well folks, we had a flurry of action so we we’re opening the blog for a last-minute update.

Bryan Schmitt has around 20 pounds – a lot more than his 4-pound, 4-ounce bag from yesterday. Also, Brandon Hunter has three bass that are all over 4 pounds each. If he can make a limit he should be pushing 20 pounds.

If anything, these updates show that there are some good fish being caught around the lake. We should see some surprises come weigh-in time.

Since the updates have slowed down we’re going to shut down the blog for the day. Kyle Walters is a clear-cut favorite to win everything, but there is still time for a lot to happen.

The weigh-in will be live on flwfishing.com at 3 p.m. CT. Make sure to watch because we will be crowing the winner of the Costa FLW Series Championship as well as handing out multiple 2019 FLW Cup qualifications.

Thanks for following along the past few days. The next blog will be in January at the FLW Tour opener on Sam Rayburn. See you then. 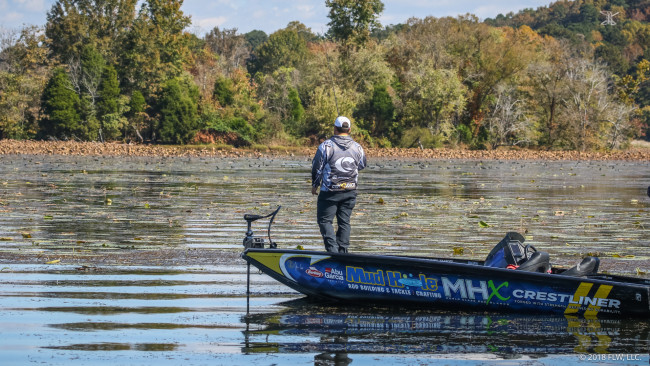 Casey Smith has been fishing around Dry Creek and has two fish in the box. He caught one on a jig but has also been flipping and A-rigging.

Kyle Walters has not upgraded since we last reported on him. It seems like the best of his bite was before the sun came out. He is one of the few anglers in the BB Comer Bridge area flipping and punching. Everyone else is still frogging or chucking spinnerbaits around.

We found John Cox and he was using a spinning rod at the moment. He has five 15-inchers in the livewell.

Troy Gibson has three small keepers from throwing an A-rig around. 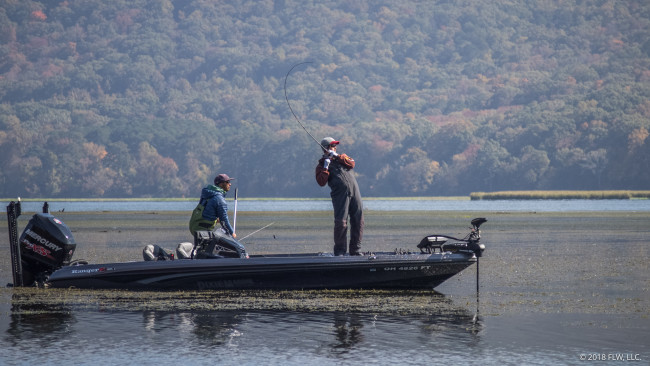 There are quite a few boats congregated around the grass mats near the BB Comer Bridge. Now that the sun is breaking through we’re seeing a bunch of anglers throwing frogs, but they’re having a tough time hooking up when they get bit. The inside edge of the grass mat seems to be the best because the outside was broken up from the storm a few days ago. Cole Floyd is in the mix of guys working the grass mat. He has two fish for about 5 pounds total.

Jimmy Reese has two small ones to show for his efforts. He's been chucking a spinnerbait around grass. 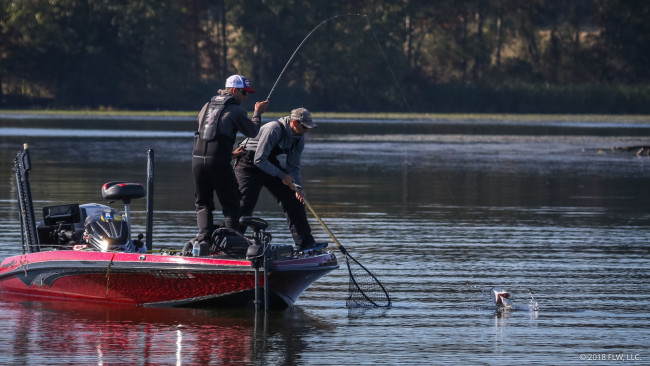 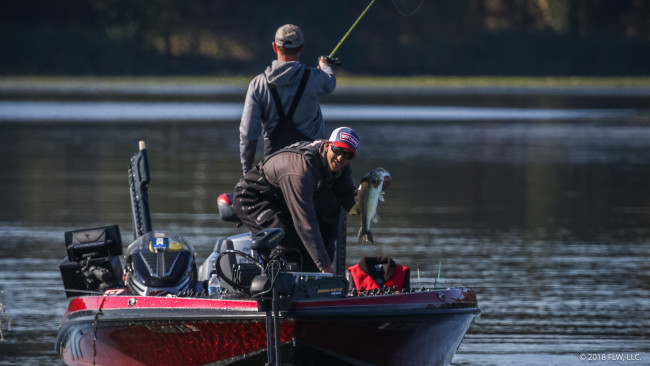 Carl Jocumsen has two keepers now – neither of them being too special. He definitely could make a big comeback still because his big bites came in the afternoon yesterday.

Bryan New just caught his fourth fish which was at least 3 pounds. He is still fishing the area near Thrift.

Dustin Evans has one 4-pounder.

Vu Au has doesn’t have anything to show on the day.

Terry Tucker and his co-angler are in a good area because they both have limits. The only issue for Terry is that the quality is not quite as good as his 16-pound, 6-ounce bag from yesterday.

Meanwhile, Kyle Walters is taking a break to eat some lunch. He says he is still worried about Thrift but his body language suggests he is feeling more confident in his chances to win. 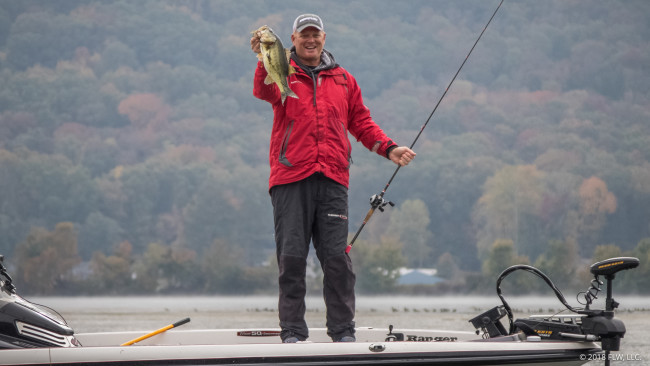 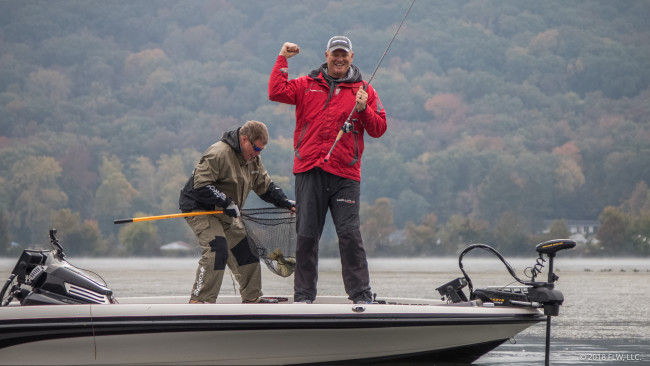 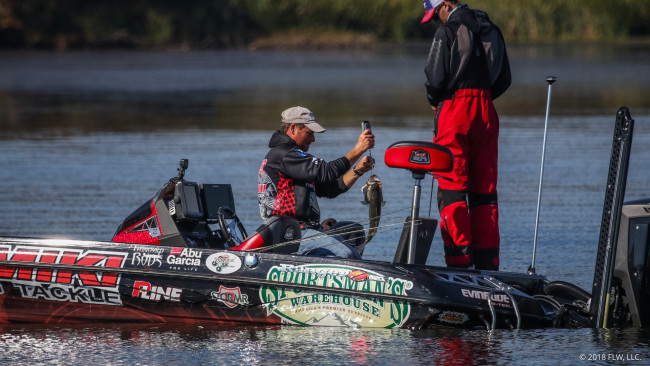 The unofficial leader Kyle Walters is really making his case to win this thing. He just culled up a few more pounds on his spot by the BB Comer Bridge. Referring to his livewell Walters said, “there’s not much light in that back of that thing.”

A little bit ago the grass line in Browns Creek where Thrift and New were fishing turned on. Thrift managed to fill out his limit for about 17 pounds and New put his first two keepers in the boat. 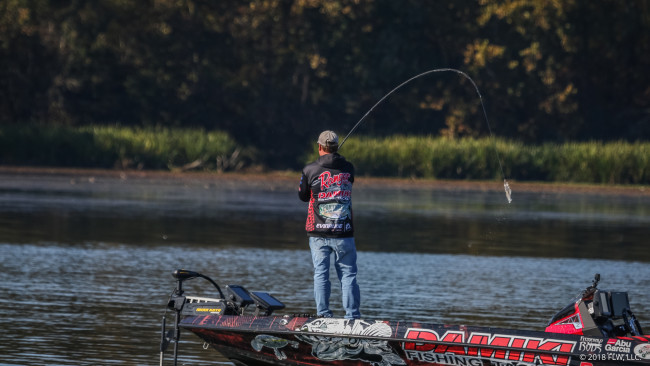 We finally found Thrift back in Browns Creek. He is still working on finishing out a limit. He said fishing is “no good.” We also found Bryan New, who was sitting on zero. 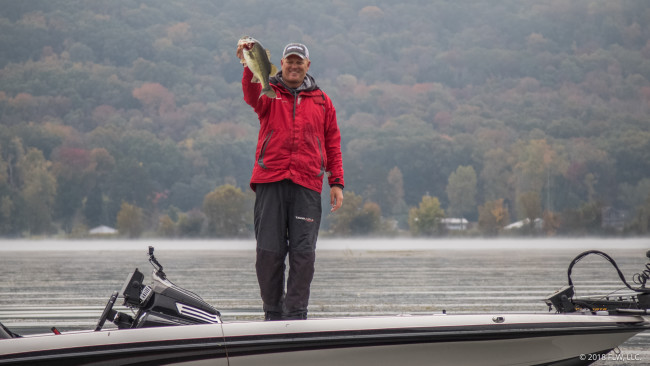 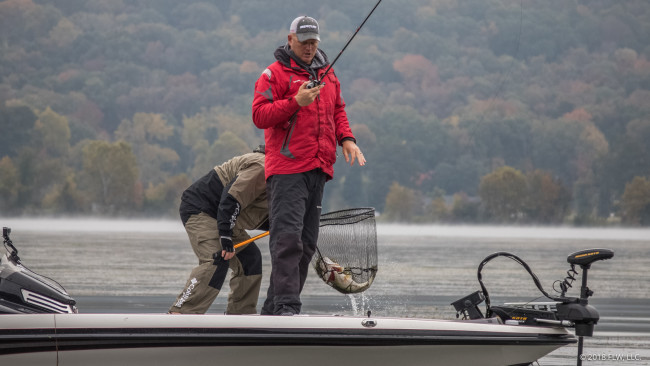 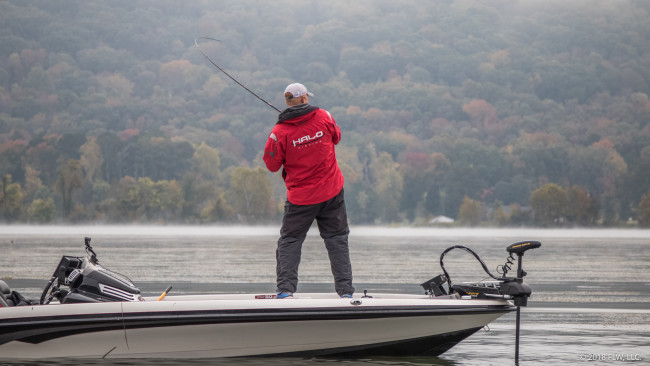 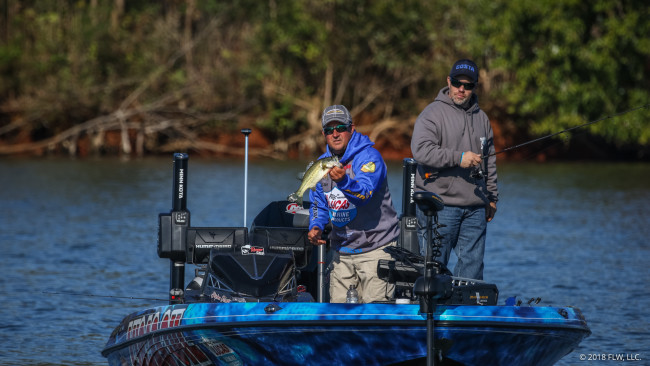 “Another one pushing 6” – Kyle Walters on his last fish.

The Florida pro is really putting on a show right now. He just got snatched another big one and now has upwards of 23 pounds. He says the fish he has caught look white, which means the spot is reloading. Once the sun comes out things could change for Walters, but obviously some serious work has been done so far.

Elsewhere, Stephan Johnston has his first two in the boat – no report on the size. 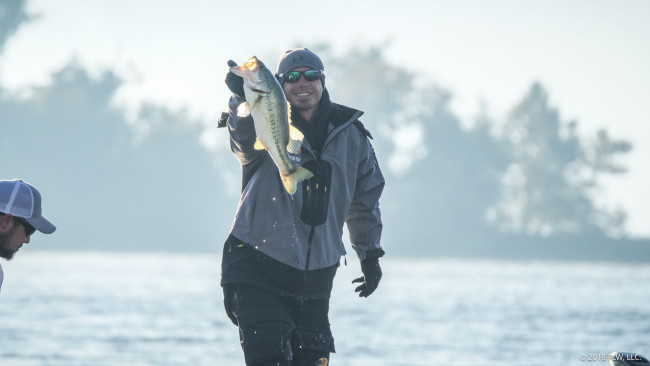 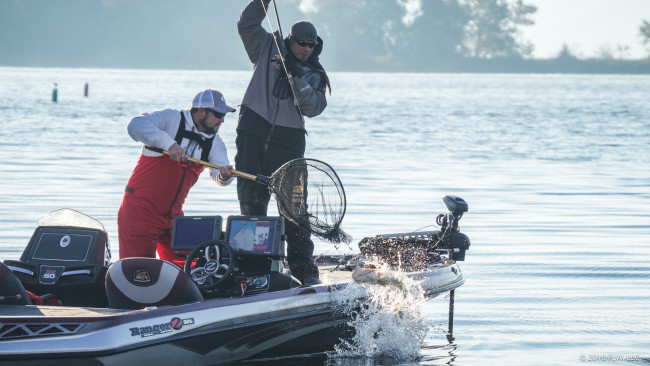 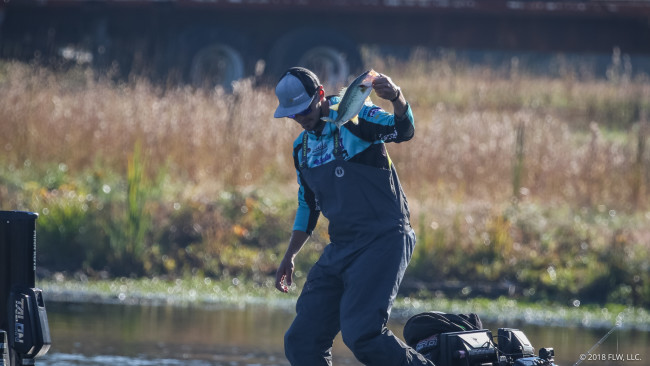 Yesterday did not go so well for Missouri pro Joe Wieberg as he ended up in 127th place. However, he’s off to a better start today as he already has what appears to be a solid keeper. He was able to coax the fish with an umbrella rig.

Still in Honeycomb Creek, Carl Jocumsen fianlly managed to get his first keeper – a small one that came up busting.

Walters just landed his fourth keeper which happened to be a 6-pounder. That brings his total up to about 17 pounds. He said the last two fish he caught are bigger than any two from yesterday. As stoked as he is at the moment he said he’s still aware that Bryan Thrift is behind him. 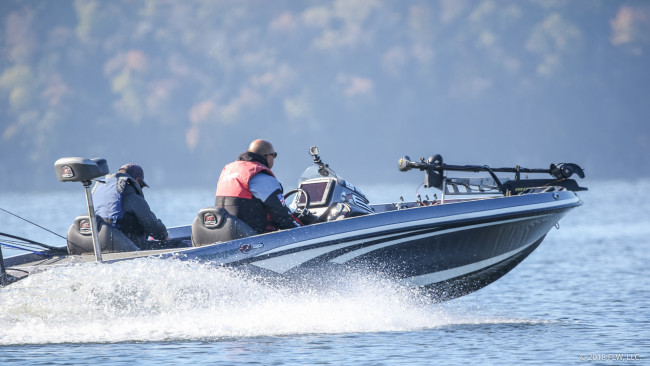 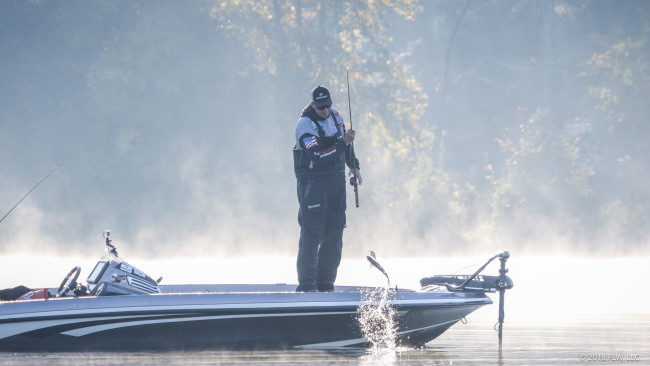 Kyle Walters is finding some company in the area he is fishing up by the B. B. Comer Bridge. It doesn’t seem to be affecting him much as he just boat flipped a 5-pounder. That’s his third keeper of the day. He caught the fish flipping/punching a beaver on the edge of a bar that drops into the main river. The stretch he’s fishing must be juicy because he keeps working the same spots over and over. At this rate Walters should be pushing the 20-pound mark once again.

In the back of Little Minky we rolled up on David Hudson (pictured) who was using a ChatterBait. He said his fish may have moved on because he had all of his weight at this time yesterday. 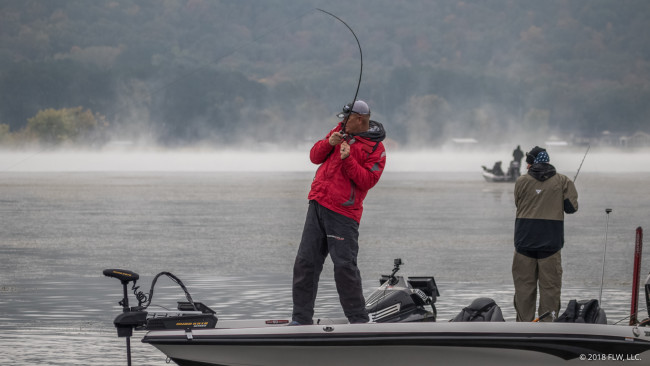 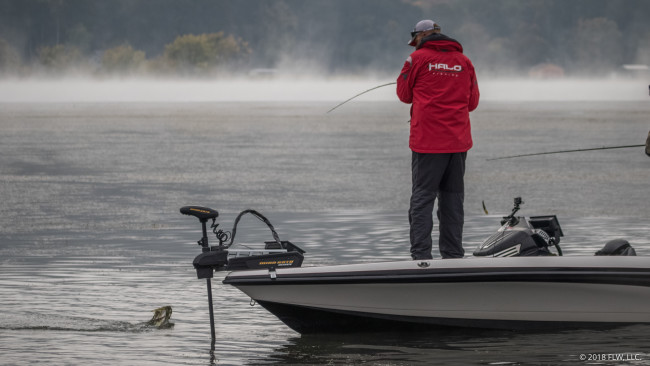 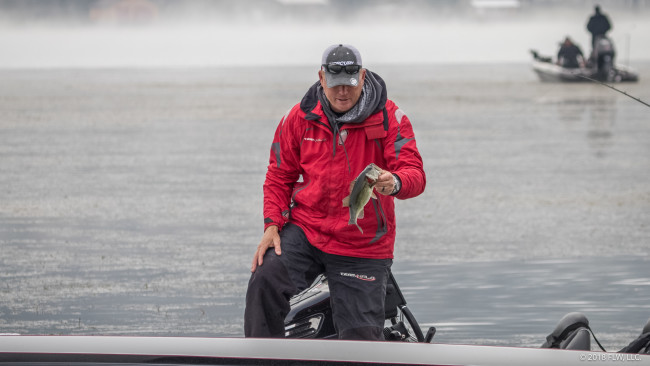 Starting the day in second place was Florida pro Kyle Walters. He has already bagged a 3 1/2-pounder and a 2-pounder. We also saw Bradley Dortch catch a keeper in the same area as Walters. Carl Jocumsen is still working on getting his first fish in the livewell. He busted out the glide bait only to have one hit it then come off.

All around the lake the fog has lifted. It feels like a much more comfortable day in comparison to yesterday. The sun coming out should play a role in today’s action at some point. 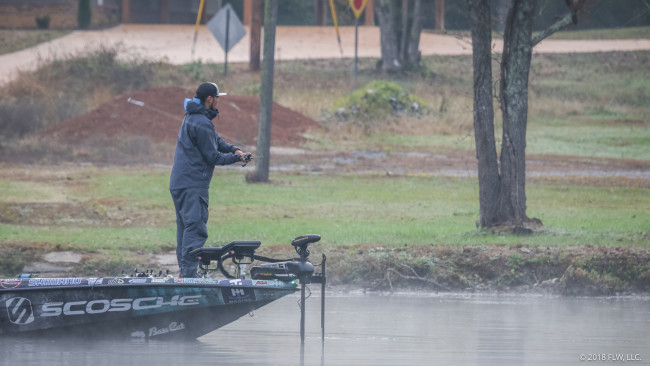 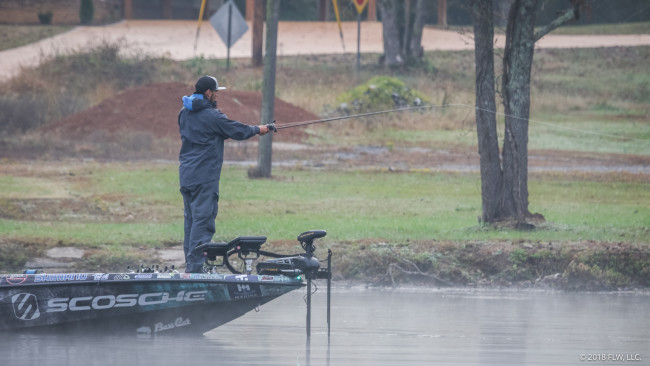 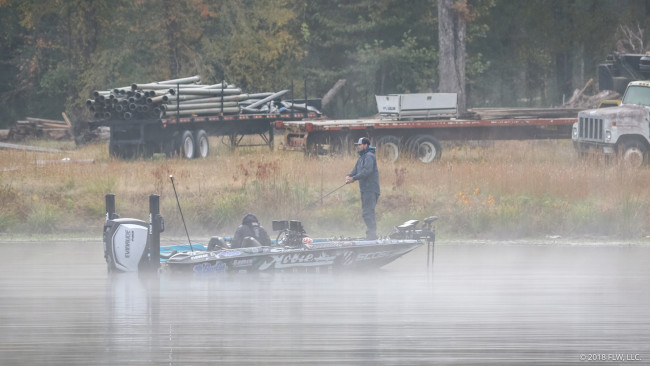 We followed our leader Carl Jocumsen to his first spot of the day. He’s back in Honeycomb Creek working areas near a bridge that produced for him yesterday. The first bait he started with was a single swimbait. The water is calm with a little fog. Perhaps Jocumsen is waiting for the right conditions before he breaks out the glide bait. He doesn’t have any keeper fish to show yet. 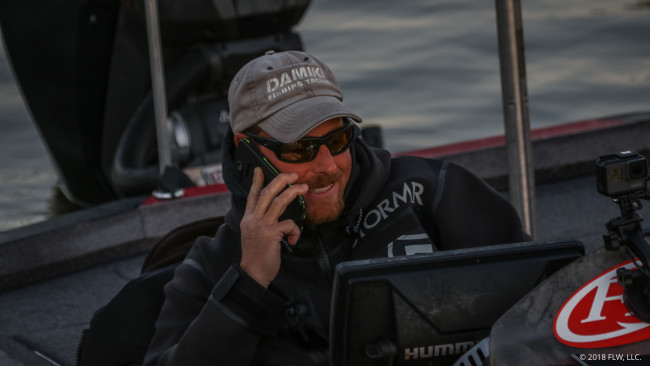 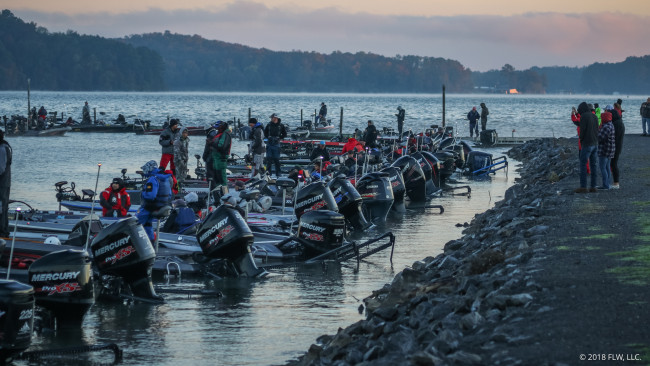 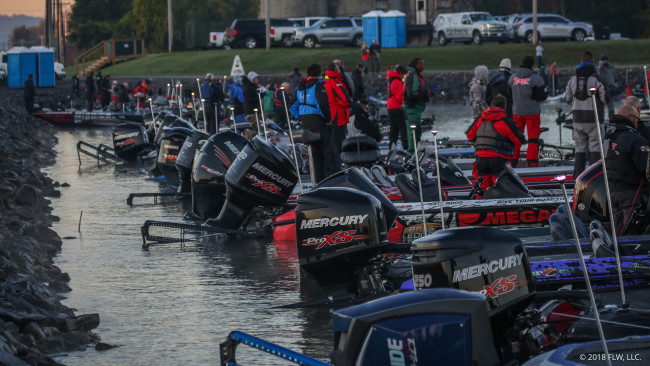 It’s championship Saturday at the Costa FLW Series on Lake Guntersville. Due to day one being cancelled, all of the anglers are back on the water and have a shot at taking it all. Hopes should still be high for many of those competing today. Since the event has been shortened to two days, there are many within striking distance of winning this thing. All it takes is a couple giant Lake Guntersville bass and someone could make a big jump up the leaderboard.

Yesterday did not quite provide a dominant pattern for anyone in our top ten. Carl Jocumsen sacked them up late in the day with a glide bait. Other than that, it was a bunch of Guntersville staples that worked for the other top anglers. Since today’s conditions are different it will be interesting to see what ultimately pulls through.

Don’t forget, a lot more than today’s paychecks are on the line. Six qualifications to the 2019 FLW Cup at Lake Hamilton will the awarded this afternoon. With such high stakes, expect everyone to leave it all out on the lake in hopes to punch their ticket to the biggest event in bass fishing.