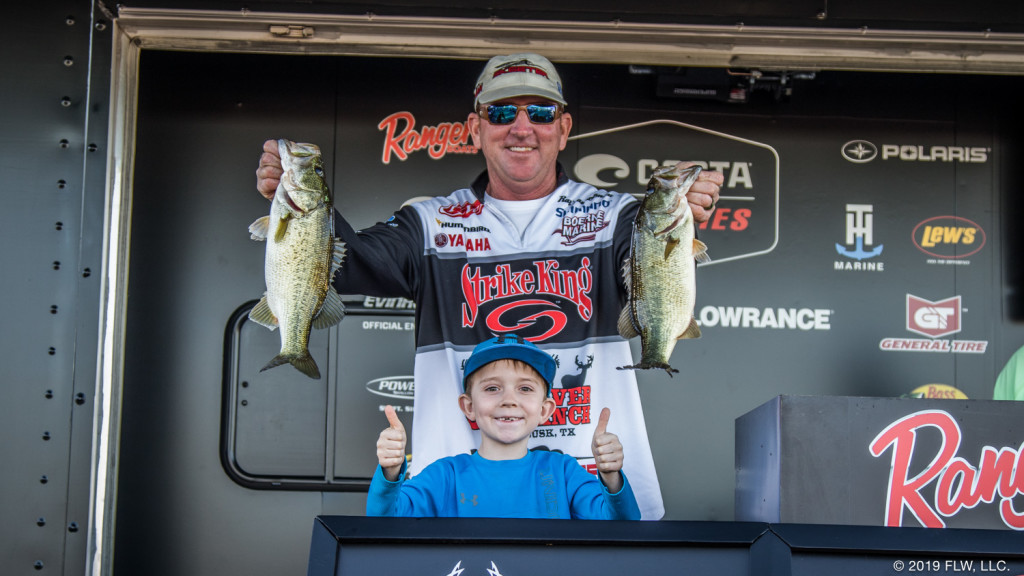 Managing fish is a common tournament tactic in which anglers restrain their effort for the purpose of conserving a spot’s potential for subsequent days. For Ray Hanselman, tossing that notion out the window positioned him for a dominant performance culminating in a winning total of 38 pounds at the Costa FLW Series Southwestern Division event presented by Ranger Boats on Lake Amistad.

Hanselman swept the Southwest Division (then called Texas Division) in 2015, including an opening win on Lake Amistad, and won that year’s Costa FLW Series Championship for four wins in a row. He now has five Costa FLW Series wins, tying him for the most all time with Randy Haynes, Koby Kreiger and Bryan Schmitt.

This week the Del Rio, Texas, pro roared into the lead in the first round on Friday with 25-15 – the event’s only bag of more than 20 pounds. Normally, he would have eased off the throttle after sacking up a strong morning limit the first day, but the tournament’s scheduled start on Thursday was postponed by severe weather. With the tournament shortened to two days, Hanselman shifted his strategy and leaned on ’em Friday.

“When a tournament is shortened by a bad weather day, you kinda have to swing for it,” he says. “You want to have three days of fish, and I did. That spot was three days worth of fish, but yesterday I caught three days’ worth in one day.

“I had a little company, but also you can’t be too conservative on a two-day tournament. I tried to get all I could out of that spot, knowing that I had other areas.”

Carrying a 9-pound, 7-ounce lead into the final day, Hanselman added another limit for 12-1 today and ended with a winning margin of the same amount. Hanselman’s Friday catch weighed as much as second-place pro Tyson Patrick’s two-day total.

Both days, Hanselman caught his fish amid the grass lining a prominent spawning bay. Working within the 15- to 25-foot range, he targeted particular sections of grass.

“It’s a big basin with one subtle ditch that runs through it,” Hanselman says. “Back in the summer, it had a wall of grass, and it set up for this type of fishing a lot quicker than other places because the grass had already fallen down and there were a few isolated high spots in the grass. That’s where the fish were congregated.” 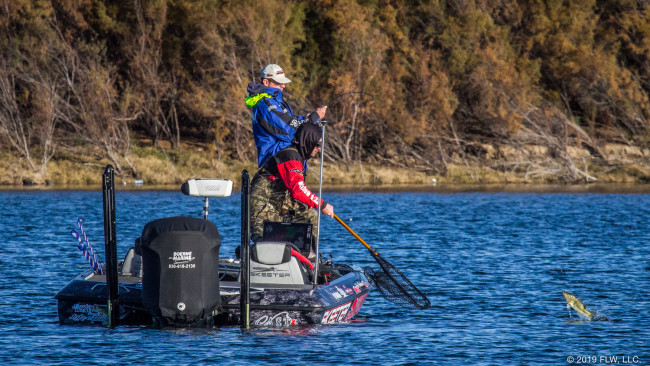 Contrasting yesterday’s fast-and-furious action, today’s post-frontal conditions had the fish pinned to the bottom and profoundly sluggish for most of the day. The key comparison: Hanselman had about 20 pounds by 8:30 Friday morning, but today found him with only a small limit of about 8 or 9 pounds by 10 a.m.

After catching his first day’s limit on a Strike King 5XD, Hanselman alternated between that crankbait and a suspending jerkbait (both in shad colors) for most of the second morning. The latter required a patient presentation.

“I’d pause it five to 10 seconds and just watched the bow in my line straighten out,” Hanselman says.

When it became clear that the bite was tough, Hanselman switched to a drop-shot with a Strike King KVD Dream Shot in the KVD magic color. He used a 3/8-ounce weight and a 12- to 18-inch leader.

“Two days after the front, with the higher pressure, they were really holding tight to the bottom,” he says. “They weren’t coming off to hit a moving bait as well, so I had to adapt to that. I almost left, but I picked up that drop-shot and started catching them.

“The weather changed midday, and a southeast wind picked up. That seemed to trigger them.”