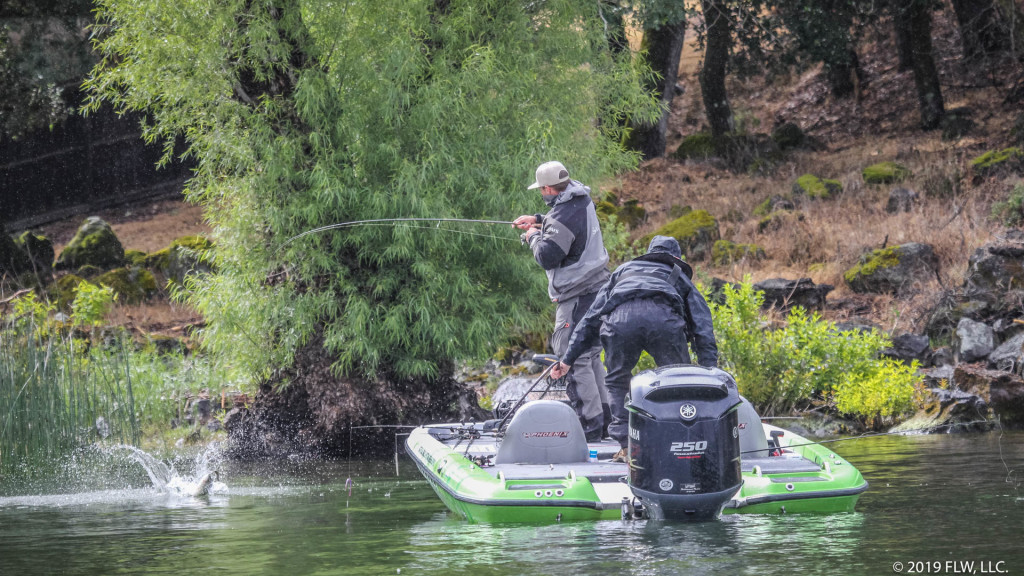 The weather system pushing through northern California brought dreary, drizzly conditions interspersed with occasional steady spells of light rain for day one of the Costa FLW Series Western Division event, which is presented by Ranger Boats and hosted by Konocti Vista Casino Resort & Marina. The sun made only a few peeking appearances, but there were several bright spots in the morning’s activity.

The field seemed to be fairly evenly distributed between the shallower northern end and the deeper southern reaches. It appeared that all of the predictable habitat features were in play, as anglers worked tule points, rocky island perimeters, docks, seawalls and shallow cover.

When we found Scott Mosey shortly after takeoff, he was on his way to building a limit by targeting an underwater rock bar. Slowly dragging a craw bait yielded several bites, including a 4-pounder.

The highlight of the day was Lane Olson’s estimated 8-pounder – one of two over 7 bolstering a limit that he eye-balled at 20 pounds.

In the co-angler division, Duke Kanaya put on a back-deck clinic by pulling a limit out of tules by 8:20 and then making two culls – one with a 3-pounder – In the next 10 minutes. Fishing behind pro Jim Lyons, Kanaya was poking deep into the tules with a drop-shot, but when the boat passed a dock, he’d switch to a swimbait.

When we found Jay Wright along a riprap bank with tule patches, he lamented the loss of a 4-pounder that served a purpose in helping him adjust to changing conditions. In practice, the spot held fish out to about 10 to 12 feet, but the cold front seemed to have moved his fish into 20 to 25 and given them a bad attitude, which is not surprising, given that Clear Lake has been stocked with weather-sensitive Florida-strain largemouth bass.

Notably, some anglers fared well by escaping the wind and fishing protected shorelines, while others leveraged the blow to their benefit. For example, Kazuki Kodama worked his way around windward docks and caught his fifth keeper by firing his bait toward the foamy shorelines between structures.

Elsewhere, Jeff Michels pitched a drop-shot and wacky-rigged worm along docks, but when he came to tule-lined gaps between structures, he fired a spinnerbait toward the shoreline and worked it past any cover. We saw him hook and lose a big fish on the first cast toward just such a spot.

The rest of the day’s forecast calls for more of the same, weather-wise, but day two is supposed to be warm and clear. It’ll be interesting to see how the fish respond.