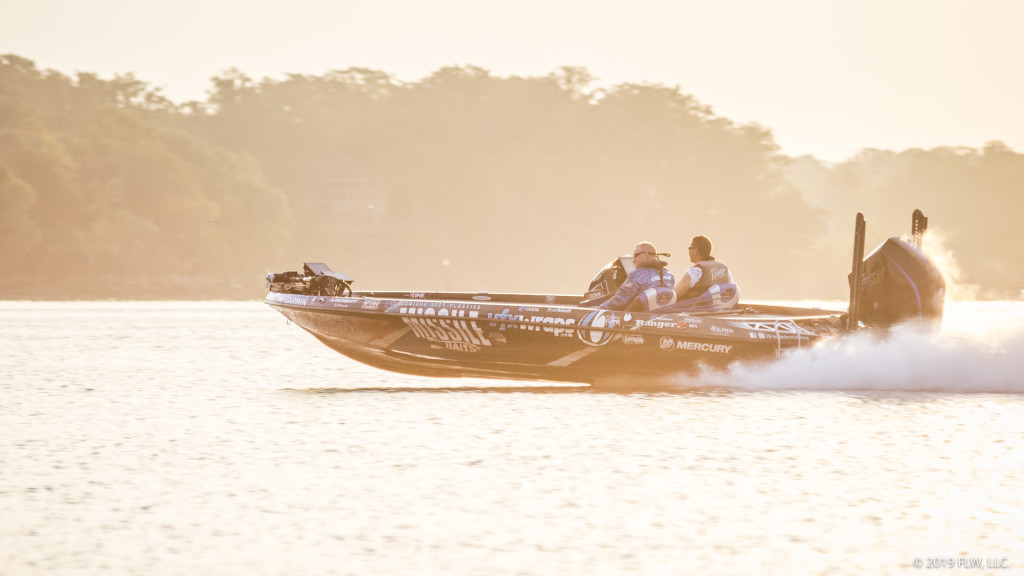 While Marvin Reese won the Costa FLW Series event on the Potomac, eliciting universal joy and praise from his friends and admirers, Bryan Schmitt finished 17th. Ordinarily, a top 20 and a check can be quite good, but for Schmitt, who has a sterling record on tidal fisheries along the East Coast, just getting paid isn’t good enough. He wants to at least be in the running on the final day, and everyone expects his next win will come sooner rather than later.

I hit the water with Schmitt after the event for some tidal insight, and while we fished, he broke down the tournament and the high-risk strategy he banked on.

This year, fishing hard cover has been more productive than it usually is on the Potomac. A bad year for the grass in 2018 rolled over into slow grass growth this spring. Though there was a ton of hydrilla at the time of this event, it still didn’t set up well. Reese won the tournament primarily from one large pier.

“On the Potomac, hands down, I want to fish grass. The grass holds the numbers,” says Schmitt. “But if you look at the event this week on the Potomac, the tournament was won on structure. All I’m going to say is, nobody in the field was able to find the motherlode in the grass, but it exists. There’s always a tremendous amount of fish in the grass; it can just hold more fish, more bait, and it’s better habitat. On the Potomac – or any tidal water where grass exists – grass is king.

“At certain times of year, though, grass fishing on the Potomac can be tough, whether it’s moon phase-related or weather-related. It can get really hard to locate the fish, especially when you get to this time of year and you have miles and miles of matted hydrilla. Somewhere there’s a 10-by-20-foot section of hydrilla out there that has the motherlode, but it’s hard to find.”

Schmitt says that when the grass bite gets as difficult as it was, it can be wise to turn to hard cover. A lot of anglers in the top 10 demonstrated that – namely Reese and Robert Grike. However, both those pros also came in without limits on the final day. According to Schmitt, finding the numbers required for multiple tournament days on hard cover is extremely difficult, and if you have to split those fish up between multiple anglers, the odds of finding success get even longer.

“I was able to come out and practice a week and a half before this event for two days,” says Schmitt. “Because of my knowledge of the Potomac and my knowledge of the time of year, I knew it was going to be difficult, and I knew the fish weren’t everywhere and that all the guys were going to find the same fish.

“The Potomac is one place you cannot find something and have it all to yourself. I spent two full days fishing oddball, off-the-wall things, hoping to find a 12- to 14-pound consistent bag of fish. I felt it was that tough, to where, if an angler could consistently catch 12 to 14 pounds, they could make the cut and be in it at the end of the event. Knowing I was taking myself out of the equation for a 16- or 18-pound bag, I wanted to be consistent, to make the cut, and I knew if I made the cut I would have a chance because the leaderboard was that tight.” 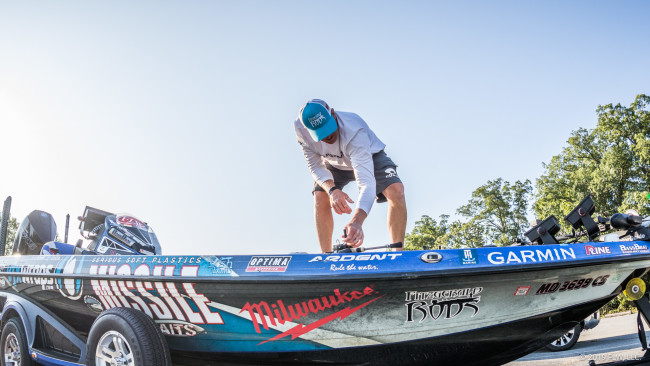 Schmitt ended up checking basically everything he had on the Potomac without finding what he was looking for. Everything from grass to hard places didn’t seem to have the consistency he was after, until he found a backwater with wood that required a significant commitment of time to get into.

“The problem was, Wednesday [the night before the event], we had a substantial storm, and it hit my location. It didn’t hit five miles north or five miles south,” says Schmitt. “I knew it would be risky to go, but I still chose to stick to the plan. The problem was, I didn’t have a backup plan close to this location. I was all-in.

“I arrived, and it was dirty. The water was 91 degrees in practice, and now it was 71 degrees and rolling mud. It was everything I know you should never fish on the Potomac. But I knew they had to be there, and I knew I was going to throw my bait near them.”

Ultimately, it was not having a secondary location that led to a subpar first day of 8 pounds, 9 ounces that put Schmitt in a hole he was unable to dig out of.

“It was challenging,” says Schmitt. “The few bites I got, the fish would barely get it, and I missed a ton of bites because of the dirty water. The kicker was not having a backup spot close to there, and it cost me.”

Weighing just four fish from his spot on day one, Schmitt went back on day two. By then, the water had cleared up to about 7 inches of visibility, and he was able to flip up the projected 13 pounds he thought he could get with relative ease. One more fish on day one would likely have put him inside the cut.

“Marvin Reese, who won the event, he fished a location that, generally speaking, it would take a hurricane to muddy up,” Schmitt explains. “His location was very stable – cold, warm, it wasn’t going to get him.

“He made a very strategic decision, and it paid off this week. He pretty much took weather variables out of the equation, which is a smart thing to do. It’s one thing I used to do out here; I used to try to find fish that, no matter what the weather did, I could still catch them, and I kind of got away from that during this event. I knew I was choosing a very risky deal, and it just didn’t work out.”