Fitzgerald in Front on St. Johns 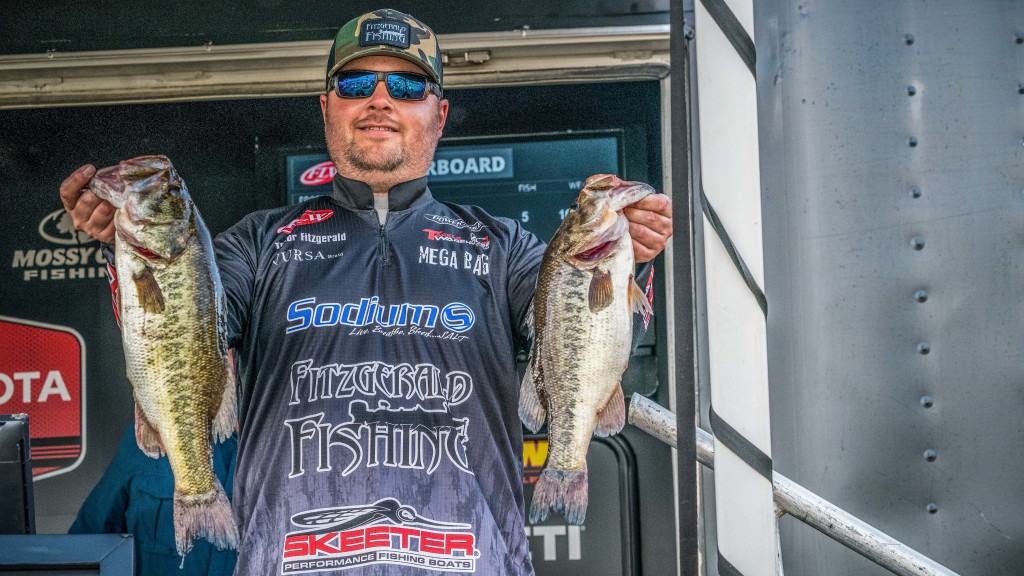 Trevor Fitzgerald has a lot of history on the St. Johns River. He’s from Belleview, Fla., just an hour or so away, and one of his 11 career top 10s in FLW competition was a win on the sprawling river system in 2008. He’s also a hammer in local derbies, though his experience only goes so far, considering the conditions this week in the Toyota Series Southern Division opener, which Fitzgerald leads after day one.

“The thing is, a lot of my areas got changed with this wind,” says the 37-year-old pro. “Parts of the river are really muddy right now, so I’m just trying to find clean water.”

So much so, in fact, that Fitzgerald thinks he might only have a couple spots left for the rest of the tournament, and he’ll potentially be in scramble mode come tomorrow.

“If I start catching them, I’ll just hunker down and stay, because I don’t know if I have that many spots left to run like I did today,” he adds.

While scrambling isn’t exactly ideal for Fitzgerald, he was already on a junk-fishing deal on day one, mostly in response to dirty, low water. Even so, he managed to sack up 21 pounds, 2 ounces, which says a lot about his feel for the St. Johns and his experience on the fishery.

“Almost everything I was using was made by us except the soft plastic and the hook,” he says.

With water levels lower than usual, finding fish that have moved up on beds has been a tall task for much of the field this week during practice and the tournament. Anglers with secondary stuff, like Fitzgerald, are in good position to adapt to those conditions. But with a minor cold front moving in tonight – paired with shifting winds – Fitzgerald is more likely than not to find himself junk-fishing again on Friday.

The conditions might be bad news for the rest of the field, too, but Fitzgerald knows the St. Johns well enough to be uniquely positioned to carry his momentum into a potential top-10 showing.

“I just know it,” he says of the fishery. “I live not far from here, and I have a lot of spots; a lot of history.”

Whether conditions bring Fitzgerald’s tournament to a screaming halt tomorrow or he’s able to power through to fish on Saturday, he still gets to sleep in his own bed this week – and fish a river he’s done so well on in the past. 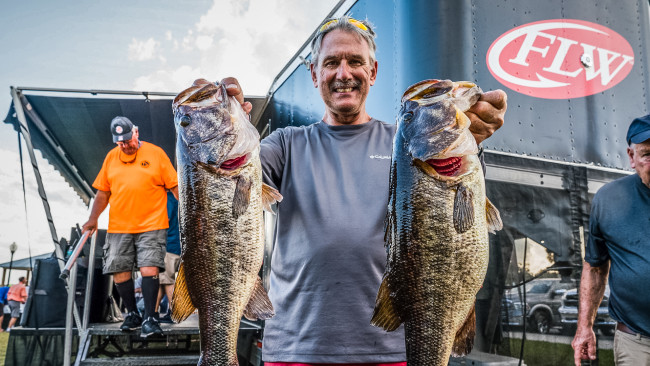 Blaine Bucy traveled a long way to sack up 17 pounds, 10 ounces of St. Johns River fish, and while the Weirton, W.Va., co-angler makes regular trips to fish Florida’s famed fisheries, his experience this week might top them all.

“I’ve been fishing FLW for about 15 years, and I wanted to fish the Southern Division because I love coming to Florida,” he says. “We had 4 inches of snow last Thursday [back home].

“I fished the St. Johns eight or nine years ago; I fished a Bassmaster Open down here. That was the only time I’ve ever fished it.”

You wouldn’t know it by the big stringer he weighed in on Thursday, anchored by an 8-pounder his boater, Joey Thigpen, put him around. With that big limit, Bucy finds himself nearly 5 pounds ahead of Edwin Bartlett heading into day two.

Despite his successful first day, Bucy is more than happy to give credit to three other major factors: his faith, his day one boater and his bait of choice.

“He’s an awesome, awesome, awesome boater and awesome man; really, really a good man,” he says of Thigpen. “I hope I draw someone tomorrow that’s as nice as he is, whether we’re on fish or not.

“I’m thrilled. If it wasn’t for Jesus Christ, I wouldn’t have anything. He smiled on me today. He may not smile on me tomorrow, but I’m awful thankful for today.”

As for the bait, Bucy had to really work hard to make sure he had some on hand this week. His favorite Florida staple is a Zoom Ultra Vibe Speed Worm in junebug, which he couldn’t find in the store before he left. After checking around, he found seven packs and bought them all.

“Down here, that’s my favorite bait,” he says. “I throw that junebug Speed Worm and the Gambler Fat Ace, 6-inch, in black blue flake. That’s pretty much it down here for me.”

The Speed Worm is what he did all his damage with on day one, and Bucy says he’s so confident in it he might only take two rods with him tomorrow.

That is, of course, provided his day two boater presents him with an opportunity to use the same soft plastic offering. On day one, Thigpen spent his time fishing around dock pilings and a “hole” in a creek that was holding some quality fish.

If Bucy is around similar stuff on day two, there’s no question what he’ll be throwing.