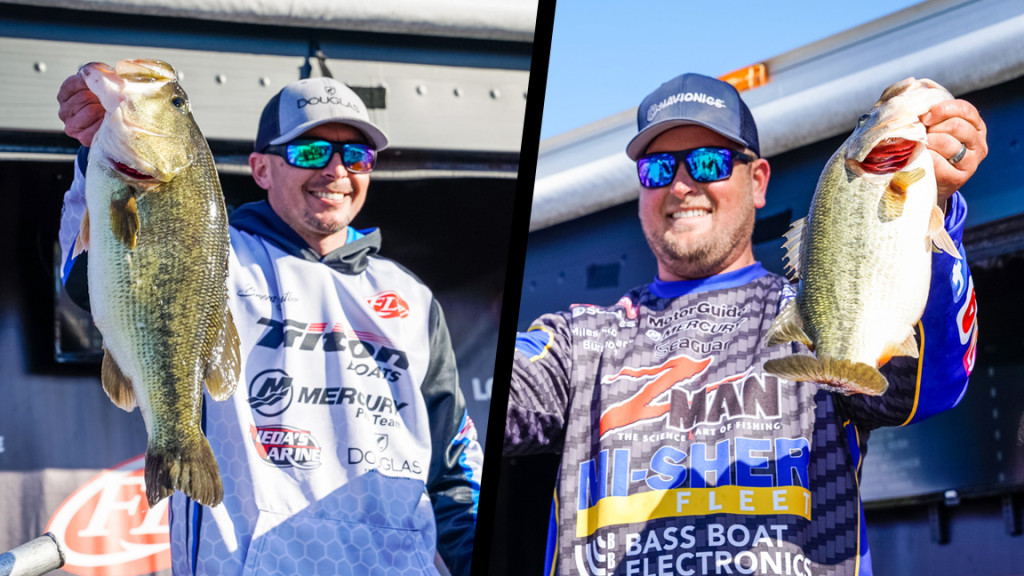 The first day of the 2020 Toyota Series Central Division tournament on Lake Chickamauga ended in a dead heat. Miles Burghoff from Soddy Daisy, Tenn., and Brent Butler from Vonore, Tenn., both ended up with exactly 21 pounds, 9 ounces. The only difference was Burghoff caught his fish early while Butler waited until the last minute.

It seemed to be a day for locals, or at least folks from Tennessee. Every one of the top 10 anglers hails from Tennessee, and six of the 10 live close enough to consider Chickamauga their home lake.

Based on the anglers who were in later flights for takeoff and weighed in last, it appeared that the bite picked up in the afternoon. Freezing temperatures in the morning turned fishing into what most anglers described as “a grind.”

Burghoff camped out in an area he found during practice, a shallow neck behind a sandbar, protected from the heavy current in the main river channel.

“I’m fishing current breaks off the main river with a lipless crankbait – red, Rayburn red,” he says. “It’s all about finding the right structures and the right retrieve.”

Burghoff was adamant that the right retrieve was critical.

“One hundred and ten percent,” he says. “Today they were biting it real finicky, and you had to present it the exact right way, a little bit of an unconventional way. They were choking it once you found that right retrieve. But throughout the day I had to adjust that retrieve. Later in the day they just kind of wanted a straight retrieve.”

Nearly every angler on the lake was throwing a lipless crankbait. But many said finding the right place to throw it was difficult.

“It’s what we call hodgepodging, junk-fishing,” says Butler. “I ran a lot of stuff today. It’s hard to repeat. I’m just fishing by the seat of my pants. Tomorrow I’m going to do the same thing … just get me a limit and then go fish for big ones. It’s all a timing issue, and it may flip-flop tomorrow. I may zero because I’m not on anything solid. I’ve had a rough practice, and I’ve just been scrambling.” 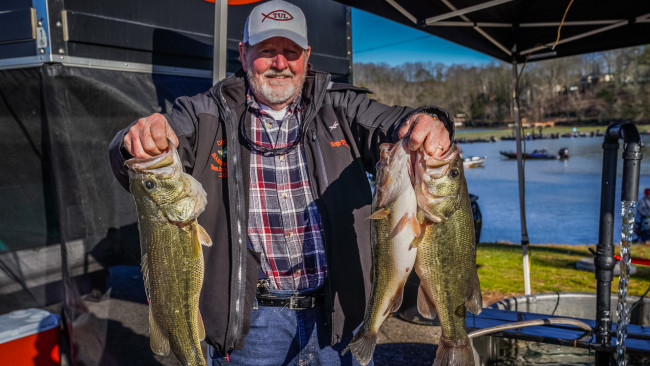 Co-angler Roger Williams broke the Tennessee pattern. Williams is from Moss Point, Miss., and ended the day with 19-9, a weight that would have put him in the top five on the pro side.

“The Lord blessed me today,” says Williams. “That’s probably the biggest bag I’ve caught in a long time from the back of the boat or the front of the boat.

“He put us on them,” says Williams. “I just put the bait on I thought they were going to hit … a ChatterBait. It’s just what I’ve had the best luck on while I’ve been practicing the last three days – just swimming it.”

Big bass of the day was a 9-11, caught by co-angler Scott Ostmann (below) from Cincinnati, Ohio.

“That’s exactly what I came [to Chickamauga] for,” says Ostmann with a big smile. “It hit kind of soft, and the line just loaded up. I had no idea how big it was until I got it to the side of the boat. That is my personal best. My last one was a 9-3 at Guntersville, so I was pretty pumped up. I was hoping for a 10-pounder, but, hey, I’ll take a 9-11, right?” 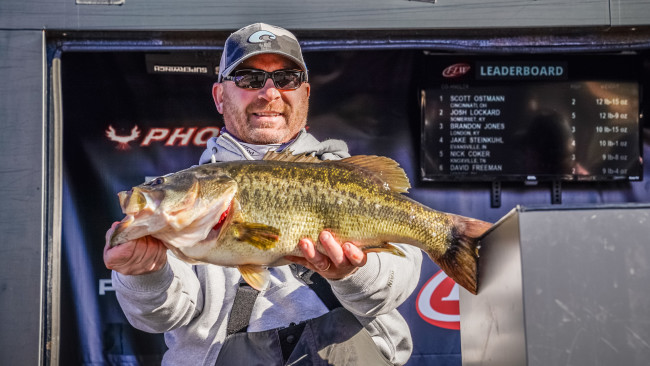