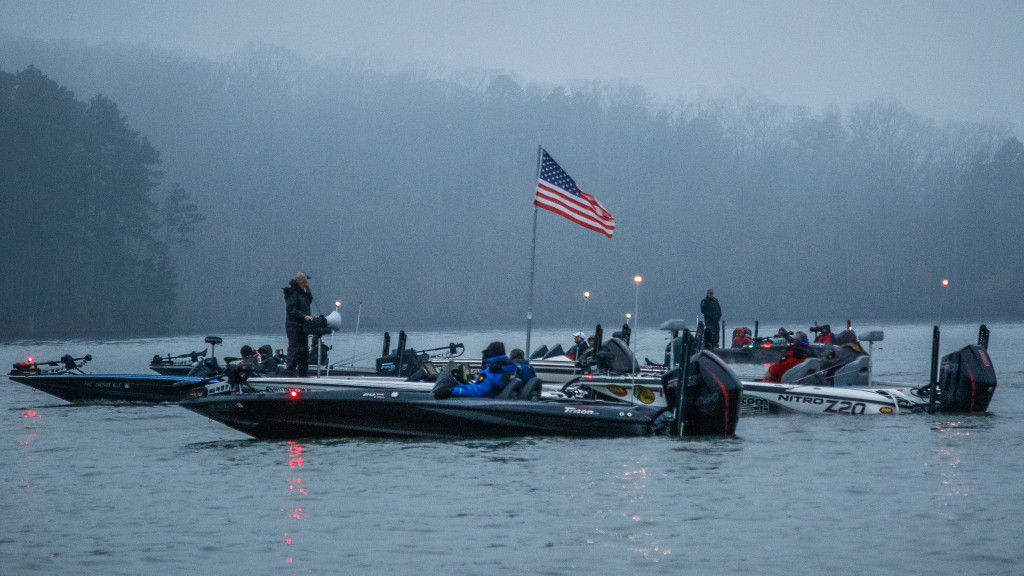 High water both a curse and a blessing as Toyota Series Eastern Division kicks off
March 3, 2020 • Phillip Gentry • Toyota Series

South Carolina’s Lake Hartwell kicks off the 2020 Toyota Series Eastern Division season this week with a three-day, mid-week showdown of the area’s best bass anglers, hosted by Visit Oconee South Carolina. Hartwell definitely has the potential to produce 20-plus-pound bags, but Mother Nature has decided to create some havoc with lake levels this winter, and it’s anyone’s guess as to how well the fishery shows out.

Recent local tournaments have not produced the bags Hartwell is capable of churning out. Most anglers blamed sudden rising waters with substantial muddy and cold conditions for throwing off the normally predictable prespawn patterns for this time of year.

Lake Hartwell is a 56,000-acre impoundment of the Savannah River. The lake is fed by three major tributary rivers: the Tugaloo, Seneca, and Six & Twenty Creek. Each of these major tributaries has several secondary creeks that also feed the lake. The result is an abundance of shoreline – about 962 miles of it.

Hartwell borders the states of South Carolina and Georgia with a reciprocal agreement in management of the bass fishery between the two states. Up until 10 years ago, Hartwell was somewhat of a sleepy largemouth bass fishery. The unintended introduction of spotted bass into the lake has now given the lake about 50-50 population between spotted bass and largemouth bass.

The primary forage base in Hartwell is threadfin shad and blueback herring, which are land-locked in the reservoir. This two-story food system means fish will take up residence in one area while feeding on shad or may run from one end of the lake to the other, without much notice, chasing herring. 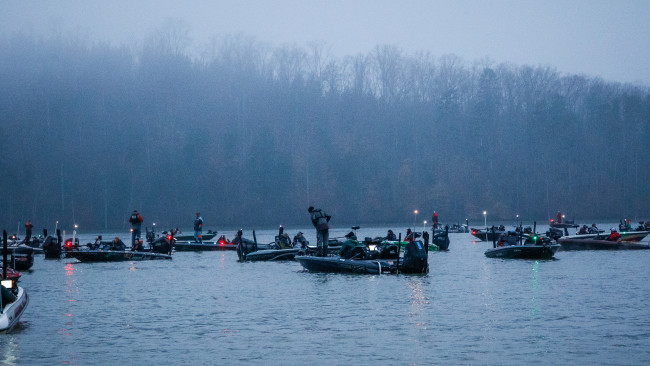 Over 47 inches of rain have fallen into Lake Hartwell and its surrounding areas since the first of the year, and the result has been a seesawing of water levels from over full pool to slightly under full pool, as the U.S. Army Corps of Engineers, which manages the lake, has tried to handle all the incoming water.

Fortunately, the mild winter so far has allowed water temperatures to remain just above the 50-degree mark most of 2020. Current surface temps are ranging from 47 degrees at takeoff to the mid 50s by day’s end.

The forecast for Tuesday through Thursday is nothing new – overcast with periods of rain on all three days. Thursday morning, as the rain begins to dissipate, anglers could see a drop in overnight temperatures from the upper 40s on Tuesday and Wednesday to the upper 30s for the final day of competition.

At present, water clarity ranges from muddy in the tributaries where most of the bass fishing is likely to occur to moderately stained, but cooler, down the lake.

Local MLF pro Marty Robinson from Lyman, S.C., is optimistic about the week ahead.

“Anytime we get a lot of water early, fish tend to pull up shallow to feed in all the new cover and growth that has grown up along the bank,” says Robinson. “That also tends to level the playing field because anybody can take a spinnerbait or a crankbait and go down the bank and catch fish.”

Robinson’s expects to stay on the trolling motor and cover as much water as possible, and could likely throw every bait he keeps in his boat. 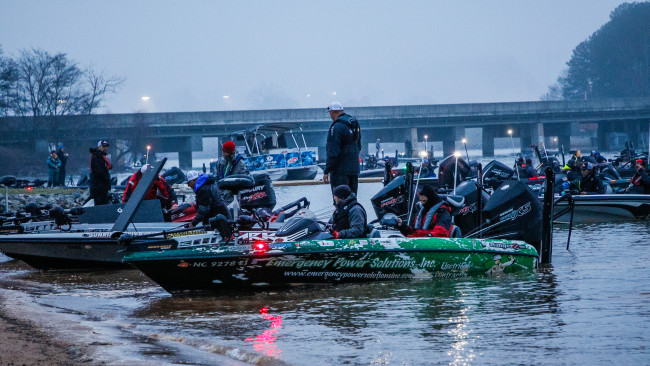 Former Tackle Warehouse Pro Circuit pro Jayme Rampey of Liberty, S.C., has won more than his share of titles on Lake Hartwell. Rampey says it’s not shaping up to be a typical March on Hartwell. This time last year, the bass were already spawning, but not so this year.

“It’s muddy, cold and the lake is high,” he says. “The fish are scattered both shallow and deep, and it’s not fishing that great. You can catch a lot of fish shallow, but I don’t think that’s going to add up to the weights needed to win.”

Rampey says he may take advantage of all three major tributaries during the three-day event, if he makes it to the third day. He has not decided on one particular tactic for this event but says he could see fish being caught on a drop-shot rig to a spinnerbait to a crankbait and almost everything in between.

A local angler, who is not fishing the event, was overheard saying he caught more than 80 spotted bass on Saturday but did not have one that exceeded 2 1/2 pounds.

Rampey’s prediction for the three-day tournament is that it will take an average of 15 pounds per day to take home the title.