Murray Leads Wheeler by an Ounce

Final day on Pickwick Lake will be a good show 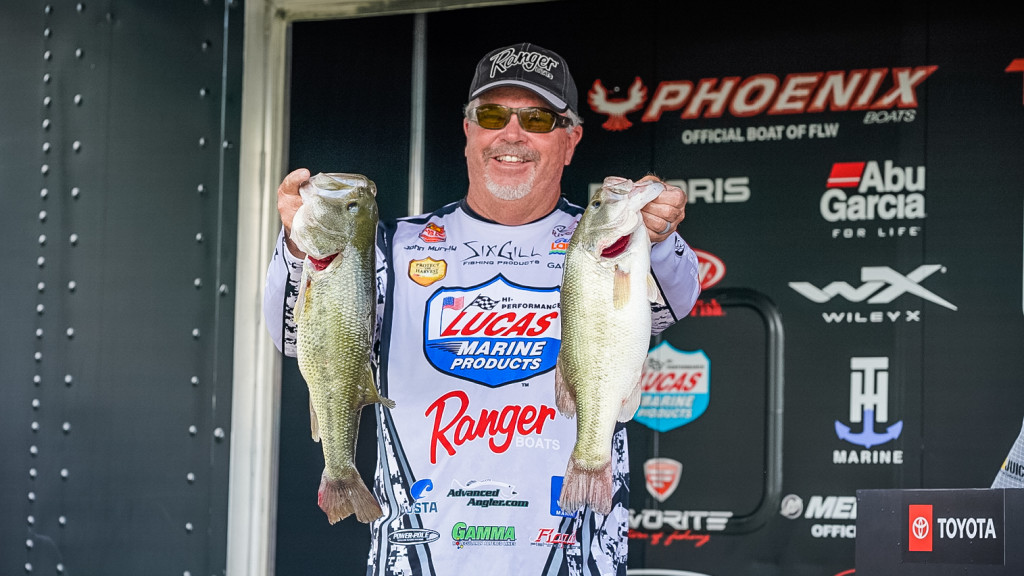 Five years ago legendary western pro John Murray moved from Arizona to Spring City, Tenn., for one very specific reason: to learn how to fish Tennessee River lakes, especially to better understand the Tennessee River’s current and bass’ relationship to it. Today, Murray’s move to Tennessee paid off as he took the day-two lead in the Toyota Series Central Division event on Pickwick Lake. On day one Murray weighed in a respectable 16 pounds, 4 ounces. Today, he added 22 pounds, 10 ounces for a two-day total of 38 pounds, 14 ounces. He now has a slim one-ounce lead over Jacob Wheeler going into the final day.

“Tennessee River tournaments invariably are always on tournament schedules,” Murray says. “And nearly every time I’d go to a Tennessee River lake in the summer, I just bomb. I finally got tired of it and moved out here to learn these lakes.”

Murray gave credit to his Spring City, Tenn., neighbor Wesley Strader for teaching him some of the finer points of fishing Tennessee River current. Today, Murray utilized those lessons well.

“I’m not out there fishing the deep places and the deep schools,” Murray says. “I’m fishing more of the 7- to 10-foot range, on top of bars. I think this heavy current has the fish and shad pushed up on those places. If this current wasn’t running this hard, I don’t think they would be up where I’m catching them. Those shallower places are providing the necessary breaks that I’ve learned are so critical on these lakes.”

In addition, Murray believes there is some sort of shad spawn going on up on the shallower bars he is fishing. He can’t physically see visible evidence of the shad spawning, but he can electronically see them thanks to his forward-looking sonar.

“My boat is setting out, but I’m using that to scan across the tops of those bars and I every now and then a flurry of activity come across the screen,” he explains. “I believe that activity is big schools of shad spawning on and crossing those bars. At times I can literally see them being chased by bass.” 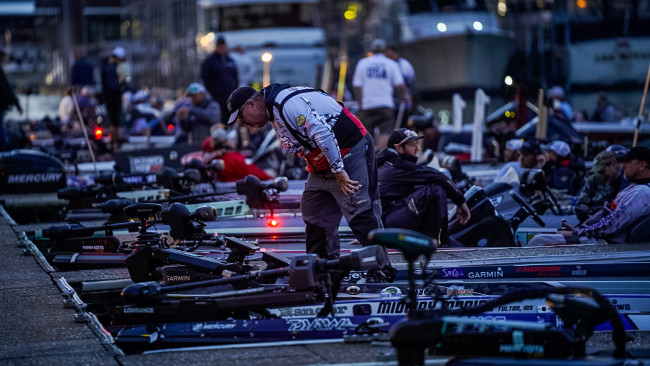 Hence Murray’s 22-pound, 10-ounce catch, which started with three 5-pounders first thing this morning. His key baits have been a big worm and big jig cast up into the areas where he sees the activity on the screen, about 45 feet in front of the boat.

“I have to make the casts at the right angle in that current to get the bite,” he says. “If I cast across the bar, that fast current bows the line too much. So I have to cast more parallel with the bar so I can bring the lure down the bar with the current.”

Obviously, Murray’s Tennessee River current lessons are starting to pay off. With another big bag tomorrow, he could get one of the biggest paydays of his storied career: winning a tournament on the river system that has been a thorn in his side for so long. 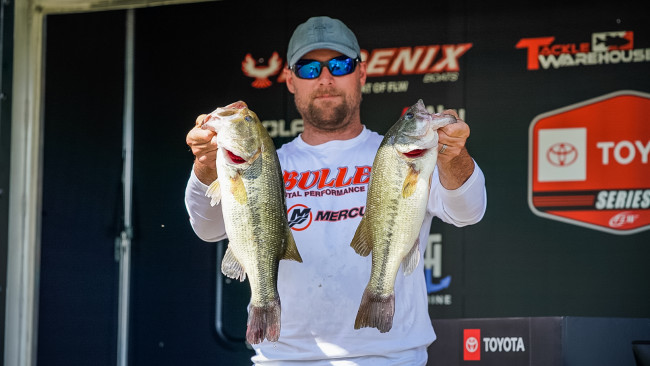 Josh Lockhard of Somerset, Ky., now leads the co-angler division with a two-day total of 29 pounds, 3 ounces. On day one Lockhard caught 12 pounds, 12 ounces and today he added 16 pounds, 7 ounces – the biggest catch in the co-angler division yet. He will enter tomorrow's final round paired with pro leader John Murray with a 3-pound, 9-ounce advantage.