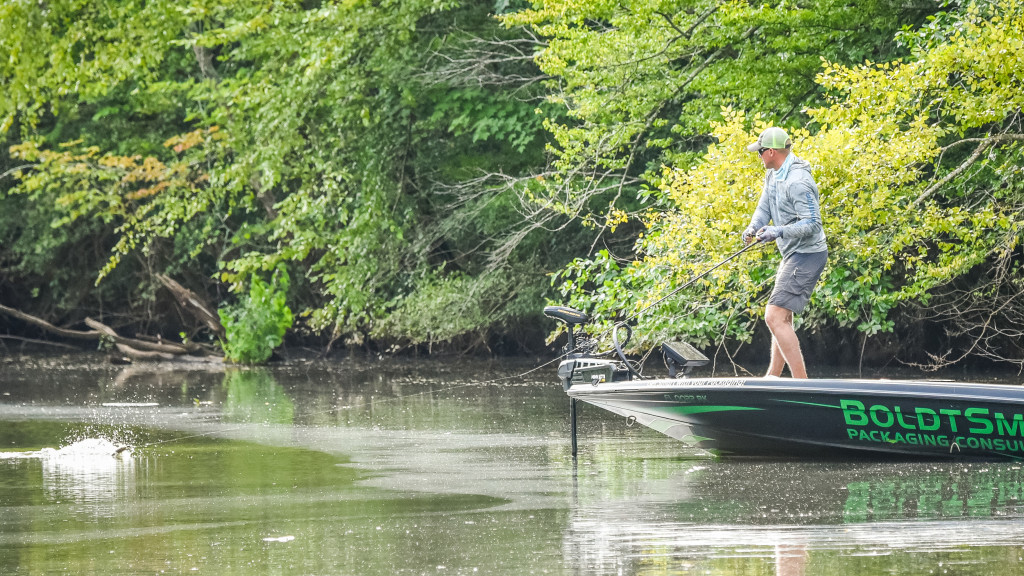 As promised, Wheeler Lake turned out to be the stingiest of the two stops on the Toyota Series Southeastern Division so far this season. The dog days of summer put the kibosh on the main-lake bite, leaving Wheeler’s many shallow creeks and tributaries to supply the pounds and ounces at weigh-in.

Tournament winner Kip Carter did his work with a buzzbait and swim jig in a shallow creek (read more about his winning pattern here). The rest of the top 10 followed in his footsteps with very similar patterns with other shallow-water staples like frogs, ChatterBaits, squarebills and soft plastics in less than 5 feet of water. 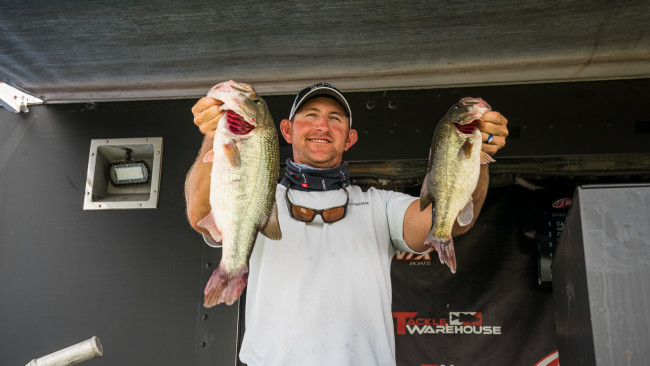 When fishing is tough, being consistent is critical. If you can be a little better than consistent, it goes a long way in a grinder event. Harry Peyton of Guntersville, Ala., improved his daily limits by a pound each day, bringing in his best effort on the final day for 13 pounds, 4 ounces to amass a total of 36 pounds, 15 ounces for a runner-up finish.

Peyton’s success was all about patterning the bream.

“In practice, I noticed the bream would congregate in shade on certain banks in the flats,” he says. “If I could find a slightly deeper or undercut bank with overhanging trees on it, bream would be piled in that shade, and wolf packs of bass would come up there and ambush them in that shade.”

In all, Peyton had five or six spots that fit the bill, spread between Cotaco and Flint creeks.

When targeting the shade, he skipped a Spro Dean Rojas Bronzeye Poppin’ Frog (bream) under the trees. After catching a couple on the frog, he would clean the area up with Texas-rigged 8-inch Zoom Lizard (junebug) tied to 17-pound-test Vicious fluorocarbon.

“The bites would often come in flurries,” he says. “I’d go a while without a bite and then suddenly catch five or six in a row when a wolf pack moved up there to feed.” 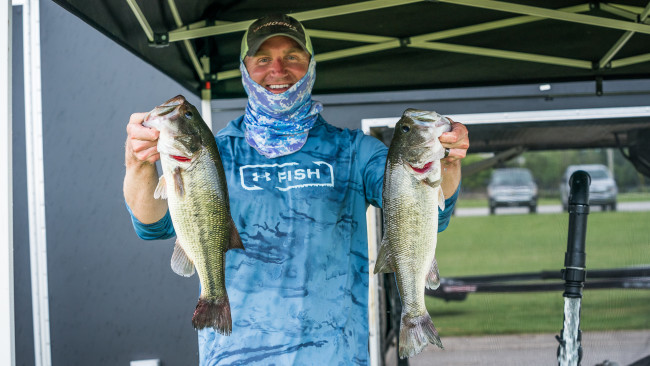 While many anglers have a disdain for Wheeler Lake due to its stingy nature, Dustin Smith of Grand Island, Fla., relishes any opportunity to fish on Wheeler.

“I love this lake,” Smith says. “I don’t really care to go to a Guntersville or a Pickwick because of all the boats. Those places are packed all the time. But here on Wheeler, you can go back in these creeks and power fish shallow and never see another boat all day; it’s awesome.”

Power-fishing shallow is exactly what Smith did at Wheeler. Much Like winner Kip Carter, Smith stayed in the back of Limestone Creek and fished a 5/16-ounce Accent Jacob Wheeler signature series buzzbait paired with a Strike King Rage Magnum Menace Grub (black) on the flats. Wind and clouds seem to help coax fish into biting on the flats. But, if it got still, slick and sunny, Smith ducked back into creeks and flipped undercut banks with a Strike King Rage Bug (green pumpkin) with a 3/8-ounce weight tied to 20-pound-test Seaguar InvizX fluorocarbon.

Andrew Johnson of Glencoe, Ala., posted a fourth-place showing by following the ditches.

“I fished on the lower end in Anderson and First Creeks,” Johnson says. “Like a lot of creeks on this lake, they have those big flats in the back with ditches running through them. I followed those ditches through the flats, fishing the swags along the ditch edges where it drops from 1 to 3 feet. If I could find a piece of cover – rock, wood or stump – along that edge, it usually had a fish on it.” 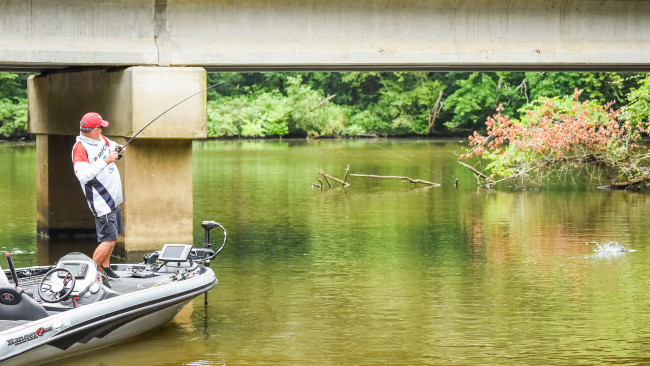 Local pro Lavoyd Lemmond of Decatur, Ala., knows a lot about Wheeler Lake, so when the Toyota Series came to town, he had large bag of tricks to work with.

Given the tough conditions, Lemmond felt his best chance at consistency was fishing up in Flint Creek.

“If the sun was out, I could get the better-quality fish going on that buzzbait,” he says. “But when we had those periods of dark overcast, I had to move to undercut banks and start pitching a Zoom Z Craw rigged with a Trokar TK-130 on 20-pound-test Seaguar InvizX into laydowns.”

Lemmond also kept a Zoom Trick Worm on a 1/4-ounce shaky head out on the deck for any kind of bare banks or scattered rock he encountered. 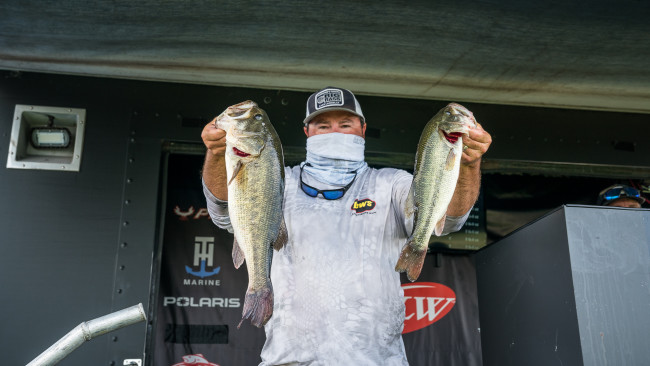 Jesse Millsaps of Jasper, Ga., led the Wheeler event on day one with a nearly 15-pound limit. After that, he slid back in the standings and ended up sixth.

“That first day, current was being pulled through the creek,” he says. “Any corner or sharp bend had cooler water piled up in it. I would ride up the creek until I found a bend where the water temp dropped from the low 80s to 79 degrees and it was an automatic. It’s like the magic number was 79 degrees – the fish were piled in that cooler water.” 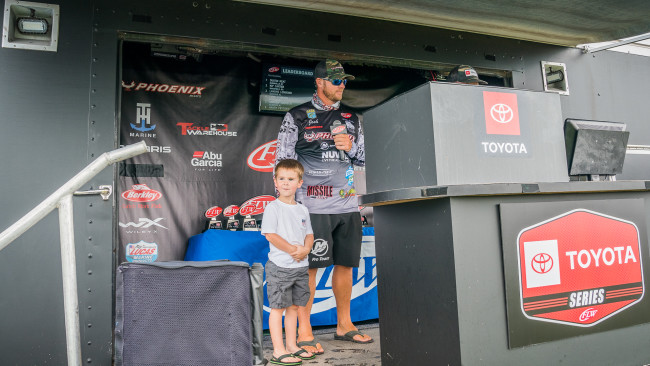 When the water dropped the next day, he found that the fish had pulled out onto the drops formed where the backwater dumped in. He reconnected with them using a Zoom Ol’ Monster worm (redbug) with a 3/8-ounce weight on 20-pound-test fluorocarbon dragged slowly down the drops.

On the final day, Bragg gambled on fishing the main lake and ended up catching fish around grass on a 1/2-ounce Z-Man/Evergreen ChatterBait JackHammer paired with a Castaic Jerky J (white). 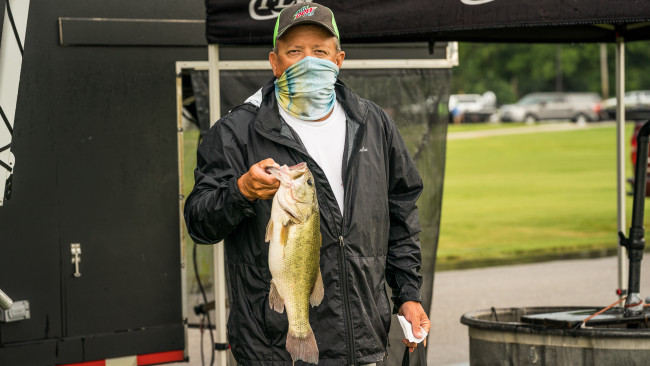 Lynn Johnson of Attalla, Ala., posted a big day one for 13-1 when he made a long run up to the Flint River. A big rain blew out Flint and turned it to mud the second day, leaving Johnson on the scramble for the rest of the event.

His best lure for the event was a Yamamoto Swim Senko (black) with a 1/4-ounce weight on 15-pound-test Seaguar InvizX.

“I had two 90-degree bends up there that were full of bream,” he says. “Those bass would ambush those bream in the current breaks. And here’s the crazy part: I could feel those bream nipping at the tail of that Swim Senko – when that happened, I knew I was fixing to get a bite. I think those bream nibbling the tail of that worm got the bass’ attention.”

On day two, Johnson caught a 4-pound, 12-ounce bass out on the main river on the Swim Senko as well.

On day three, he bailed into Fox Creek and fished lily pads with a Zoom Ultra Vibe Speed Craw on a 3/16-ounce weight and a spinnerbait. 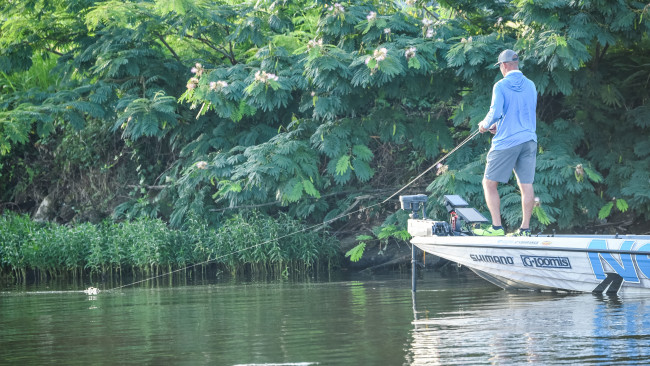 Dustin Neat of Dunnville, Ky., made his money fishing shallow grass in several pockets near the launch site at Ingall’s Harbor. All of his fish came in water less than 2 feet, either casting a 1/2-ounce Z-Man/Evergreen ChatterBait JackHammer (chartreuse and white) teamed with a Yamamoto Zako trailer (white) or pitching a Texas-rigged Zoom Ultra Vibe Speed Craw (sprayed grass) topped with a 3/8-ounce weight. Both were fished on 15-pound-test Seaguar fluorocarbon line.

10. Spratlin all-in with a spinnerbait

One area and one bait was the key for Bill Spratlin of Rockford, Ala., who fished lily pads in Fox Creek all week with a 1/2-ounce spinnerbait (chartreuse and white) paired with a Zoom Fat Albert Twin Tail trailer.