Oklahoma pro separates himself from the pack after day one 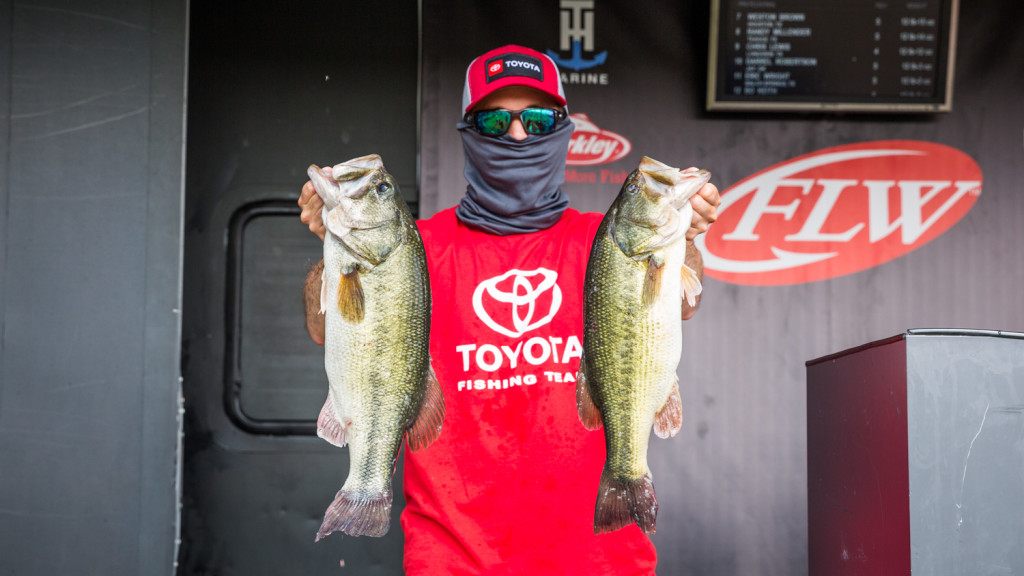 Low waters and tough conditions didn’t stop local angler Cameron Foster from claiming the lead at the end of day one in the Toyota Series Southwestern Division event at Fort Gibson. The derby is the division’s first event since January of this year, and the Wagoner, Okla., native wasted no time in laying claim to his turf.

On a day where most of the field struggled to boat a limit, Foster punched a weigh-in ticket totaling 22 pounds, 11ounces, nearly 4 pounds ahead of second place Danny Weems of Como, Texas.

Foster’s bag was comprised of 4-plus-pound bass topped by a 6-0, so it’s understandable why he didn’t want to divulge too much information after the first round.

“I had that bag by 8:00 a.m.,” says Foster, who remained tight-lipped about his pattern of choice. “Mostly, I was fishing big swimbaits in a mixture of offshore and shallow water.”

In a field of struggling boats, Foster’s boat was on a roll. His co-angler, Charles Dubroc of Hessmer, La., finished the day second in that division with 14-3. “It’s been tough on everybody,” adds Foster. “We had no wind today or anything, so I knew it was going to be tougher on the lake. I fished for about six days straight. Every point, every cut, every pocket – everything on the lake just looking for something different. I found one little spot that I pulled up on Sunday, and it is about the size of the back of my truck. Sunday, I caught a 5- and 6- pounder on it. I thought I would start there and at 8:00 a.m. this morning I was done.

Foster has yet to notch a top 10 FLW finish at the helm, but has notched several at the co-angler level. Foster’s monster bag under tough conditions elicited awe from other anglers in the field, one of whom was overheard saying, “I don’t know who you are, but I feel the urge to call you daddy. Nice haul, man.” 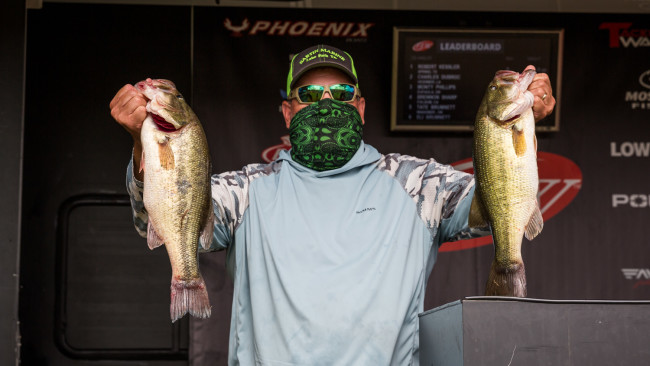 Weems strolled across the weigh-in stage with a smile on his face, after bringing home a bag of 18-8.

“We whacked them today,” he says. “We had a great day. I pulled up to the first stop and didn’t have a lot of confidence in it, but it worked out. I hung out around mid-lake all day fishing two areas. They weren’t fish I found in practice. For me, today was another day of practice and I just found them.”

Weems and his co-angler had limits by 11:30 a.m., and spent the rest of the day culling as they unknowingly tried to close the gap between themselves and Foster. Asked how he was successfully targeting fish, Weems simply notes, “soft plastics.” 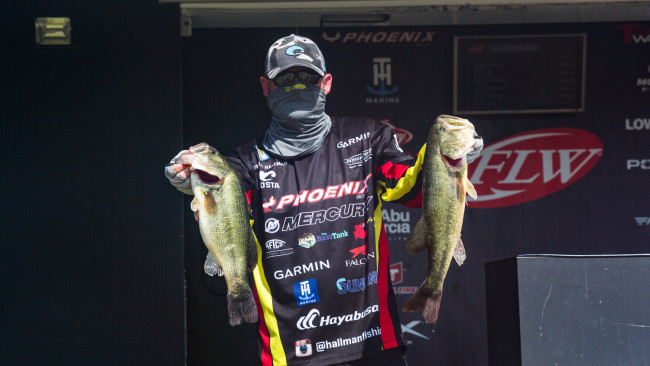 Hallman took an early lead in the standings with 16-5 and held on to third place as the final anglers took to the Toyota Series stage. For him, today’s result came down to flexibility.

“Just junk fishing,” Hallman says. “It ain’t easy out there, man. I caught them doing all kinds of different things. Practice was the same way. I was catching them for a while, but whenever the sun comes out it changes. I got fortunate today and got a couple of good bites. That’s all that happened.”

Hallman last found himself in the FLW winners circle with a 2018 Tackle Warehouse Pro Circuit crown at Lake Lanier. This week, he’ll look to repeat history by making a surge to catch Foster at Fort Gibson. 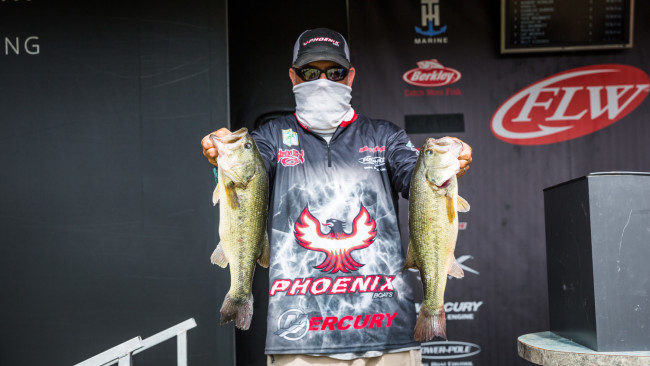 Trinity, Texas angler David Curtis was culling by 11:00 a.m., and projected to be a top-10 finisher by mid-morning. Though he only caught seven keepers all day, their 15-12 total was enough to keep Curtis in contention as the event heads into day two. While most anglers focused on shallow water today, Curtis appeared to be one of a handful of anglers making time to examine areas in deeper water.

Curtis is no stranger to the podium, having netted more than $678,000 in winnings over the course of a 20-year run with FLW that includes 24 top-10 finishes dating back to 1999—most recently a second place score at this year’s Toyota Series event at Toledo Bend. 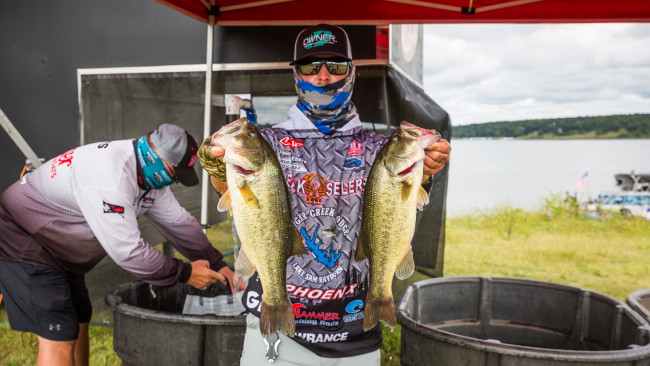 Fresh off of last week’s Tackle Warehouse TITLE Presented by Toyota at Sturgeon Bay, the Tackle Warehouse Pro Circuit pro says he only had one day to practice for Fort Gibson. That meant a day filled with experimentation that ultimately rewarded Ebare with a 15-7 sack worthy of a top-five position after day one.

“I just got back from Sturgeon Bay,” says Ebare. “I went out hunting around today, trying to get a better feel for the lake. Tomorrow, I think they will be in the same places, but the weather is going to change and we will have to figure out how to catch them again.” 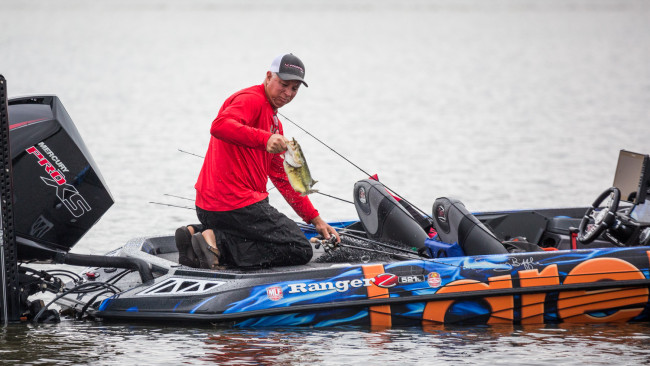 Robert Kessler of Spring, Texas stands atop the co-angler leaderboard with a strong, 16-5 bag of bass. Kessler says he was fishing a squarebill crankbait and YUM Dinger while bringing in fish throughout the day. “It didn’t hurt to have a local pro with me as well,” the smiling Kessler adds.

That pro? Tommy Biffle, who operates a nearby power sports center and lives on the lake. Though Biffle wrapped the day with a 10-2 bag good for 31st, he was proud to note that his co-angler rose to the occasion. Asked if the lake’s unusually low water—some 4 feet below average levels—was impacting the fishing, Biffle notes, “I have seen it this low before, but not in a long, long time. Low water should make the fishing better here, but September is the toughest month to fish this lake.”