On a tough Fort Gibson fishery, Cameron Foster is making it look easy as he hauled in 18 pounds, 5 ounces on day two of the Toyota Series Southwestern Division event to back up his day-one performance of 22-11. With 41-0 overall, Foster holds a massive lead worth 11-13 heading into Friday’s final round of action. While Foster has had decent success from the back of the boat, he’s en route to posting the biggest win of his career if he can keep things rolling.

Foster looked up from his graphs in a winding, narrow portion of the Grand River above Fort Gibson Lake at around 8:30 a.m. In his hands, he formed a big fat zero and hoisted it to the sky—a sign that today would be tougher than the first. By this time yesterday, the Wagoner-native had already boated a limit that would earn him a wide lead headed into day two. But as the sun climbed into the sky on Thursday, Foster’s early bite had not returned.

“This morning, we pulled up on the same spot where I caught them yesterday,” Foster says. “I had a 4 ½-pounder chase me to the boat and not bite. Then, my co-angler threw in and caught it.”

After that, Foster says his spot went dead. That’s when the duo proceeded to make a move.

“We fished and fished and fished and nothing happened,” he adds. “I said we have to go to another spot. We hit probably six spots, but by 9:30 I decided to go back to where we started. When we got there, the shad were there. I made three casts and caught a 6, a 4, and a 3.”

The trio of fish was a minor miracle on a day when most anglers up the river were once again struggling to boat bass due to high pressure and unusually low water – about 4 feet below average. That depth has made navigating shallow stretches like the riverine portion on Gibson’s northeast side treacherous in places. However, Foster knew that in order to fill a limit, that’s exactly where he would have to hunt.

“The weather has been tough on everybody,” he adds. “After those three fish, I just went fishing and caught another 3 and one more keeper. I had two smaller ones hit by the end of the day.” 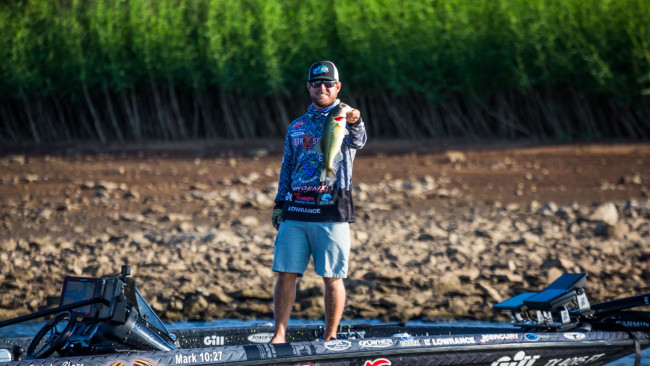 Yesterday, Ebare was still figuring the lake out after just one day of practice following the Tackle Warehouse TITLE presented by Toyota at Sturgeon Bay last week. Today, Ebare went back to the drawing board to climb from fifth place into second.

“It was totally different out there today,” says Ebare. “I caught them differently than I did the first day, but I did go back to the same area. I felt like the fish were still there. The bait and conditions were different. Yesterday, I caught everything on top. Today, it wasn’t happening, so I had to make some adjustments and catch them differently.”

Ebare says his spot generated more pressure from competing anglers today, causing him to back off after he’d boated a limit by midday.

“I saw a lot of boats go through there today,” he adds. “I think it has been pressured pretty hard. I caught 13 pounds there was pretty sure I would be fishing tomorrow, so I decided to spend the afternoon figuring it out for tomorrow.” 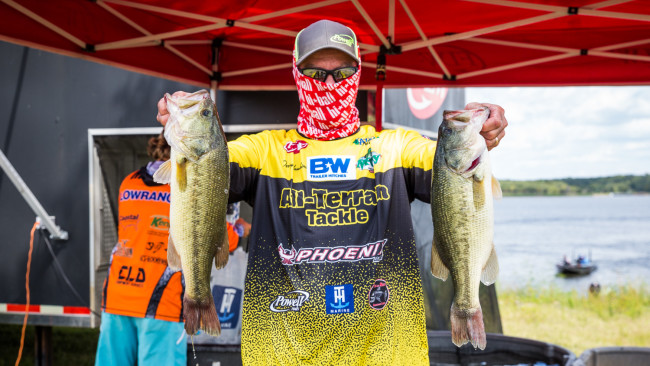 Hawkins finished the first day in seventh place and leveraged a 13-2 day to climb into third place heading into the championship round. His 27-15 total is within striking distance of a top finish, but he’ll need a big bag and a lot of luck to claim the crown. The yellow-clad angler from Corsicana, Texas was one of the few anglers who says his first day pattern held up in roughly the same area he was fishing on day one.

“It was a lot tougher than yesterday,” Hawkins admits. “I started on topwater and basically did the same thing as yesterday. I would fish topwater and drag a swing-head jig, but I didn’t have a limit until about 1:00 p.m. Yesterday, I had a limit at 7:30 a.m.”

Hawkins says he isn’t sure if he can replicate his success for a third day in a row.

“I may have burned too many fish today. I don’t know if I am running out of fish or not, but I felt like if I didn’t hop on them yesterday other people would have.” 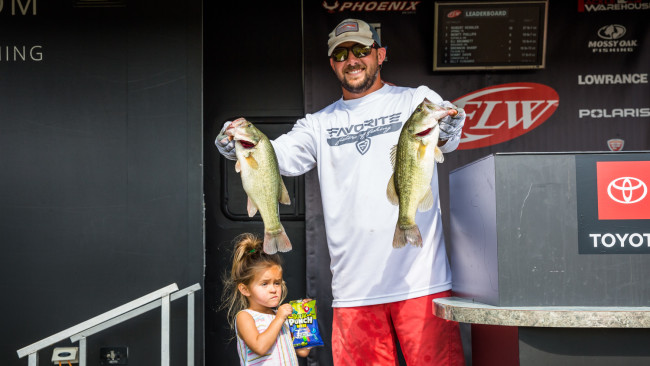 Zach Birge is putting together a solid showing in tough conditions this week while staying “no more than five miles” from the ramp in either direction.

“Today started out pretty good,” he tells. “I caught some buzzbait fish but missed a couple of good ones. Then, I started running brush piles and landed five or six keepers.”

Birge says his day slowed down after a strong morning. Around midday, conditions on the lake did shift as what looked to be an overcast afternoon turned into a mostly sunny patchwork of blue skies with light wind. Birge countered the slowdown by returning to his starting point, boating "three or four” more keepers where he began the day. 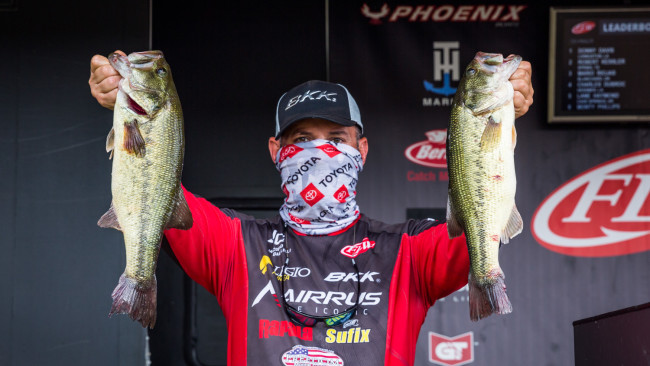 Jacopo Gallelli has already taken home a Toyota Series top 10 thanks to a sixth place showing on the St. Johns River in February. This time, the Italian angler is looking to improve upon that performance after a slow start saw him in 20th place after the first day at Fort Gibson.

Gallelli soared into the top five today with a 14-15 bag after taking a penalty for one dead fish. At the ramp, he was hoping the fish wouldn’t cost him a chance at the top 10, but his day was good enough to safely land him in contention on the final day.

“I went completely to the opposite side of the lake today,” Gallelli says of his resurgence. “Yesterday, I did not have that option because I was in a late flight, but today I had a chance to go to a place where I was first. Then, I hooked a fish and started thinking I could catch a limit. I had by limit by 11:00 a.m., then I caught two fish but they were just 2-pounders, which I already had a few of.”

Gallelli says he caught seven keepers today, a figure he’ll have to improve on to move onto the podium tomorrow. 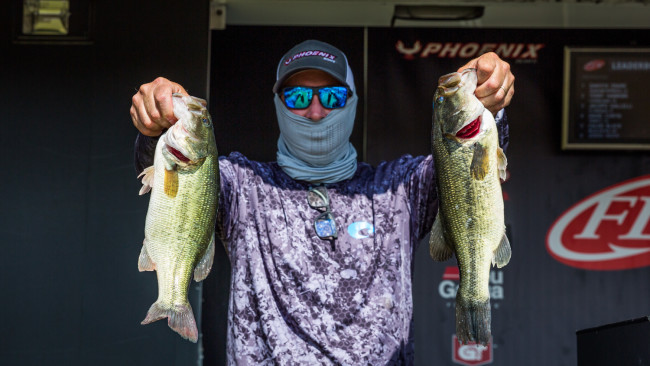 Robert Kessler stayed atop the co-angler board today thanks to a 10-12 day that brought his two-day total to 27-1. That total would put the Spring, Texas angler solidly in the top 10 of the pro bracket—no small feat considering he’s swapped partners each day.

“It took me a while to finish the limit,” says Kessler. “I was just really struggling getting size today, so I was happy to get five.”

Kessler is holding a nearly 8-pound lead over the second-place co-angler, Monty Phillips of Eufaula, Okla.